Anthony Joshua: What Next If He Wins?

The eyes of the boxing world will be fixed on London’s O2 stadium on Saturday night, when national hero Anthony Joshua challenges cool American Charles Martin for the IBF world heavyweight title in front of a sold-out crowd.

Since winning a gold medal at the 2012 Olympics, Anthony Joshua has been tipped as a future world heavyweight champion. It’s been a question of when, not what if. However, not even he would have imagined that he would be getting the chance in what will be only his 16th bout since joining the professional ranks.

His transition from amateur to the paid ranks has been a seamless one, winning all 15 by knockout. He has passed every test with flying colours and has only gone past the 3rd round once, which was in his toughest fight against bitter rival Dillian Whyte. Joshua ended that bout in emphatic style with a vicious knockout in the 7th round, after having his chin tested for the first time.

However, on Saturday night, ‘AJ’ faces an even tougher challenge against IBF world champion ‘Prince’ Charles Martin. Martin, 29, is unbeaten in 24 bouts (1 draw), and won the title briefly held by Britain’s Tyson Fury, when defeating Vyacheslav Glazkov, who had to retire due to a knee injury suffered during the fight. 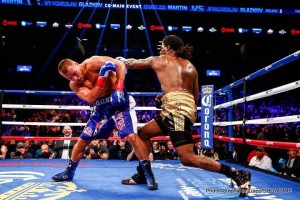 So, who’s going to win? Will Anthony Joshua continue his rise to the top and become only the 2nd British boxer to win a gold medal and then a world title, or will Charles Martin continue on his path to being the division’s no.1 boxer? The fight comes at a time when both men are largely untested – we simply don’t know how good either really is – but this fight will certainly tell us all we need to know.

What if Anthony Joshua loses?

If AJ were to lose on Saturday night, it certainly wouldn’t be the end of the world. The fight game is the hardest business in the world and not many fighters leave it undefeated. There have been the odd exception – Rocky Marciano, Joe Calzaghe and most recently Floyd Mayweather to name a few – but for most, they are resigned to the fact that they may taste defeat at some point. The most important factor is that Joshua has time on his hands. He is young enough, popular enough and talented enough to make it to the top, even if he were to lose this weekend. Another important factor for Joshua is that he is backed by a powerful promoter in Matchroom and by television company Sky Sports. Under the guidance of Eddie Hearn, Matchroom have become the sole provider of bouts to Sky Sports, with an agreed 24 shows a year. So, should Joshua come up short against Martin, he has the team, the platform and exposure to rebuild his reputation.

Joshua is also very much a ‘name’ in the heavyweight division. Should Martin inflict a first loss on his record, he will still be sought after by many because they will see him as a payday and may think he is damaged goods. A win over Joshua, even a Joshua with a loss on his resume, would look great on any heavyweight’s record.

Finally, Joshua will have the option of a rematch with rival Dillian Whyte. There is no love lost between the two giants, who now both hold a win over each other and Whyte would love the chance to avenge the only loss on his professional record. Their first fight was a classic and did brilliant box office numbers, so a rematch would be a very marketable option. Another fight that would grab the nation’s attention, would give Joshua the perfect opportunity to regain the public’s confidence in his ability and remove doubts about his talent.

So, what happens if Joshua wins? 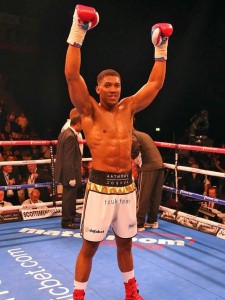 Well, to put it simply, he becomes one of the biggest stars in world boxing. Joshua is in a win-win situation. If he wins, he will be world heavyweight champion and everyone will believe the hype. However, if he loses, he is only 26 years old and it will have only been his 16th fight and the title shot will have come too soon. It would be a big setback, but one he could easily recover from.

A win will put him in a strong position and he will be an attractive option for heavyweights all over the world. The WBC world heavyweight champion, Deontay Wilder, is also undefeated and is also an Olympic medallist (winning Bronze in the 2008 Olympic Games). A unification fight with Wilder, who is willing to travel, would be huge. Two undefeated world champions, who are both knockout specialists and Olympic medallists sells itself.

What winning does do for Joshua is open up the possibilities of numerous huge domestic clashes. On a smaller scale, you have the tough and durable Dereck Chisora, who is fighting Kubrat Pulev for a chance at becoming mandatory for the IBF title. Chisora would surely be a test for Joshua and because he is such a controversial character, the public would surely be gripped by the build-up between the outspoken Chisora and the cool, calm and collected, Joshua.

Next up, would be a mouth-watering clash with former WBA world champion David Haye. Haye, who recently completed his comeback with a 1st round demolition against the poor Mark de Mori, is a man who despite only fighting once in the past 4 years still has a huge following. The Hayemaker is still one of the biggest names in the sport, proof of this being selling out the O2 for his comeback fight against an unknown opponent. Haye speaks well, has the model looks, has the following and as he proved in his last outing, is still very dangerous. A clash between Haye and Joshua would surely sell-out football stadiums twice over and would pit the young lion against the proven vet.

Finally, would be a unification fight between Joshua and undisputed world heavyweight champion, Tyson Fury. Just seeing their names in the same sentence is enough to get any boxing fan excited. Fury has been very uncomplimentary towards his domestic rival in recent weeks. He has called AJ a ‘talentless bodybuilder’ and believes that he will get knocked out by Martin. Joshua has responded to recent barbs on Twitter, calling Fury a ‘fat boy’ who is jealous of his supreme physique. The fight isn’t even close to being made and it’s already got the boxing universe talking about it. A fight with Fury would undoubtedly be one of the biggest fights we’ve ever seen on these shores – bigger than Frank Bruno vs Lennox Lewis – and would make both men millions in the process. It would also answer the question of who the best heavyweight in Britain (and possibly the world) is for good.

What are your thoughts?
Do you think Anthony Joshua will win or lose?
Who should he fight next?