Mothers, sisters, grandmothers, girlfriends, wives, best friends, and queens I apologize on behalf of the brothers that seem to have forgotten just how much of an important role you have played and continue to play in the Black community. Some men disrespect and underappreciate you far too often. 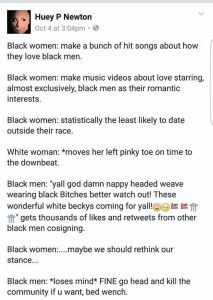 My year of blogging on AntoineSpeaks.co.uk has revealed to me just how much negativity towards Black Women emanates from their fellow Black Men. I was already aware of the increasingly negative narrative in the music; however, it really sank home when I became an Uncle and sat down and thought what exactly do my two nieces have to listen to, what world are they growing up into and how will they be treated in real life and on social media.

My desire to make this video was further compounded when I went to a discussion at BBC 1xtra. A Black woman spoke about negative masculinity, fragility of male egos and lack of support Black women have had from Black men. But our continuous expectancy for Black women to always support us regardless of how we treat them or the lack of support for them from us.

In short, if a man can give a definition of Racism they should be able to emphasize with their sisters enough to at least try to understand Patriarchy. Many brothers will quote Malcolm X as one of their heroes, but how many follow his teachings about the difficulties Black women face and respecting and protecting Black women?
With that said, he is my apology:

Since making this apology I have made this video based on the feedback and reaction I received:


I have tried to use my website as a platform to uplift, open minds and challenge someone to think a little deeper. We have these posts which speak on the experiences of Black women; please check them out

What did you think of my apology?
What do you think brothers should be doing to support our sisters?
Please comment below and share; challenge someone to think a little deeper