BBC’s Black British Month started off on the wrong racially motivated clickbaity foot. I am imagining a production meeting where someone posed the question “How can we engage Black people with our Black History Month content? What do Black people like? hmmm… I’ve got it- chicken!”. Admittedly, BBC Newsbeat’s intentions were probably far more benevolent than that but their execution was also far too stereotypical.
Yesterday, BBC Newsbeat attempted to tackle the stereotype of ‘Black people and fried chicken”. However, their clickbait motivated tweet led a somewhat pointless discussion down a path of accusations of at least uninformed ignorance or at most institutional racism.

Black people like chicken more than others – myth or reality? https://t.co/yIOsUTzUXl

Due to backlash, the BBC subsequently deleted the tweet and reposted it with a different title. However, people were not just annoyed by the title but actually by the questioned posed in the video in the first place.

@BBCNewsbeat delete this video and issue an apology immediately. You’ve shown yourselves to be out of touch, dated and racist.

First of all Black people in Britain are 3% of the British population. If KFC and those other delicious chicken spots had to survive off the ‘Black pound’ then they would soon go out of business. There are plenty of KFC, Nandos and ‘Chicken Spots’ in areas that aren’t populated by Black people. Moreover, I am yet to meet a White person who isn’t a vegan and hear them say “You know us white people hate friend chicken”. It is illogical and inaccurate to think Black people alone are the reason the chicken population has a fear of frying pans. The only way this discussion could be more offensive is if the BBC were to get David Attenborough to present a documentary called Chicken’s Lives Matter.

But in all seriousness, this one tweet sums up British society’s inability to discuss race, stereotypes and inequality in a constructive, informative, serious and offensive way.

Yes, sometimes people will be offended. By offensive I mean, at some point White people will have to feel uncomfortable and even offended. Offended at the actions of other White people ie people who are racist, people who hold conscious and subconscious racial biases, people who perpetuate the cycle of inequality and people who are not working or supporting the goal of equality for all. Disagree? Well, let me rephrase the point from racism to sexism. If the BBC produced videos for Women’s History Month at some point as man, I should be offended. Offended at the negative and sexist actions of other men. Offended at the continuation of the patriarchal system, lack of support for feminism, lack of male support against rape culture and the sexism often found in lad culture. In short, the point is offending people can be a useful tactic to get them to realize there is something unfair and wrong in society.

However, just as a tweet about women and makeup most likely will not give anyone substantial knowledge on patriarchy, nor is a discussion on fried chicken going to facilitate a discussion on racism and inequality. Black British people have serious concerns and issues that we want and need to discuss. However, to many, it seems belittling to start that discussion about whether we are predisposed to love chicken as Dave Chapelle says.

Another problem is the stereotype of ‘Black people and fried chicken’ is actually more American than British. Even with that said Black Americans also eat a wide variety of foods; much like all Americans.

British Black people are general two sets of culture- Caribbean and African. Both of which have a wide variety of food, cuisines, local delicacies and delicious recipes that reflect the variety and diversity of Black people and the Black diaspora. However, our communities and individual experiences often are generalized and fall victim to an Americanization of the Black experience. Just as the BBC’s attempts to create a debate around race has fallen victim to the Americanization of social media and discussion videos. A better word would be a Buzzfeedisation.

BBC 3’s recent discussion videos on a whole host of topics literally look like carbon copies of Buzzfeed videos. The difference is Buzzfeed has enough Black writers, journalists, presenters and comedians working for them to be able to decipher between a thought provoking topic and simply an offensive or pointless question merely for clicks and retweets. Or at least they thought they did… Buzzfeed made the faux pas of releasing “27 Questions Black People Have For Black People.” It was filled with racial stereotypes and outdated questions. It led to them apologizing. But what were they apologizing for?

I believe they fulfilled their primary goal of being conscious for profit. I call Buzzfeed, Huffington Post Black Voices and this tweet by BBC Newsbeat- ‘Conscious for Profit’. Conscious for profit is where a website, blog or news organization blogs about a topic not to educate inform or create a much-needed debate but simply to capitalize off social outrage, a hunger for a topic to be addressed and a need for a minority voice to be heard or elevated. However, without a genuine love, understanding, care or goal to educate, inform and challenge an important issue; the post, video or blog is simply there to keep people reading or watching for a couple more minutes after the title has click baited them to the site. Hence, why the Buzzfeed’s reply to BBC’s racial faux pas tweet does not mention their own nor does it go into any depth of discussion. Therefore, both are examples of posts/tweets that are conscious for profit- merely taking up space on the internet to create traffic for ad revenues.

This very pattern of simply reporting outrage or conscious for profit posts is repeated on news sites from RTs to The Daily Mail. However, without explanation or debate the reader is simply left to their own racial biases or lack of awareness. Sub One commentator on RT website wrote

This is the back and forth that South Park satires in their new series. In Episode 4 of Season 20, Gerald Broflovski becomes an Internet Troll and breaks down his philosophy on the art of trolling.

“No, no, no, it’s not about one person. It’s about pushing people’s buttons so that they’ll react in a way that pushes other people’s buttons. Look, you don’t just troll a woman with cancer to get a reaction from her, it’s all about the group of people that are gonna come to her defense. They’re gonna be so self-righteous that another group of people will eventually find those people totally annoying. You’re just setting them against each other. It’s like the fission reaction that sets off the fusion explosion. The Internet does it all, and you just sit back with your glass of wine and laugh.” Gerald Broflovski – South Park

So, the questions becomes how do we differentiate between conscious for profit, Trolling and a genuine desire to have discussion on an issue? I believe there needs to be a strong element of explanation and desire to create awareness. Through that awareness, the overriding goal should be to help people understand an issue in a better and more productive manner. Basic click baiting on irrelevant issues only trolls people already with the mindset of wanting to speak out against racism and inequality or fuel the other set of people who want to speak out against said people ie the social fusion explosion Gerald speaks of.

In short, uninformed people make stupid and ignorant comments. Any blog, tweet, post or video that tackles such issues needs to give those type people awareness, education and answers not fan the flames of their ignorance with racial stereotypes, outdated statements or simply not enough content or discussion to enable people to develop an informed opinion.

With that said, I like friend chicken. Yeah, I said it! But I like jerk chicken, stewed chicken, curried chicken and many other ways of preparing and eating chicken. However, I also eat in far more quantity salmon, cod, lamb, curry goat, salt fish fritas, festivals, dumplings, fish and chips, shish kebab, veg, white chocolate Hershey Bars and pretty much the same variety of food that everyone else eats regardless of race(except those rebellious vegans). I should have to feel like the BBC or anyone else is judging me each time I sit down for dinner.

Although this BBC Tweet was badly written, they have said it is part of a wider documentary on Black British experiences and stereotypes. Hopefully, the rest of the documentary won’t be as misguided as this short extract. Britain needs to have more conversations on race, inequality and stereotypes. However, those who create a platform for that discussion need understand that having the wrong conversation only creates further animosity and perpetuates those very stereotypes that they are supposedly seeking to combat.

Most importantly racism exists for more than one month a year- so discussion around issues on race should not be limited to one month either.

Let us know your thoughts
Do you think this BBC tweet was racist?
Do you think they made a honest mistakes or an institutional problem?
What is your favourite food?
Do you feel comfortable discussion issues around race publically?
Please comment below and share; challenge someone to think a little deeper 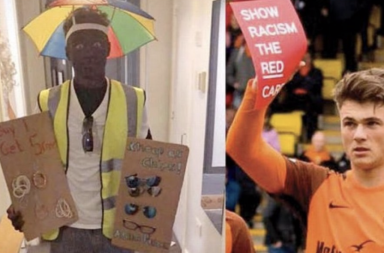