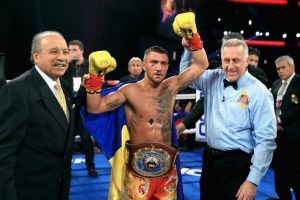 After the needless Mayweather vs McGregor fight and the epic(hopefully) Canelo vs GGG Fight, it looks like fight fans will be getting another fight they have been hoping for, between Lomachenko and Rigondeaux. Just like Canelo vs GGG, it still needs the media to get behind the fight and promote these two fights like they should be! Real boxing is alive and well but the promotion of fighters and mega fights is terrible at times.

Vasyl Lomachenko and Guillermo Rigondeaux are debated to be the best two amateur boxers of all time, with 2 Olympic gold medals each. Yet, since turning pro they have also been making light work of the professional ranks and a are both world champions. Therefore, fight fans have waited in anticipation for these two masters of the ring to finally meet and decide who is the best pound for pound boxer. Promoter Bob Arum looks to have delivered boxing fans this epic fight as an early Christmas gift,

Top Rank chairman Bob Arum announced that Vasyl Lomanchenko next fight will be in the main event of a Top Rank ESPN card at the Theater at Madison Square Garden in New York, on 9th December.

Although Arum would not specifically say the opponent was going to be Rigondeaux, it was very obvious that Arum is in talks with his team.

“It would be a historic milestone in my professional career,” Arum, 85, said of the possible fight. “It’s never been done before — each of them winning two gold medals and fighting each other. That’s something special. That will be remembered in history.”

On Sunday, Top Rank president Todd duBoef and Rigondeaux promoter Dino Duva of Roc Nation Sports both told ESPN that Lomachenko-Rigondeaux is the fight that is being worked on.

“Bob Arum is having discussions with Roc Nation Sports and Dino Duva about the fight,” duBoef said.

Neither Lomachenko nor Rogondeaux are well known to ‘casual’ boxing fans. Yet they both have impressive amateur and professional boxing records. Both are 2 times Olympic Gold Medalists. Lomachenko won gold as a featherweight in 2008 and a lightweight in 2012. Rigondeaux won both his Olympic gold medals for Cuba in 2000 and 2004 as a bantamweight. Lomachenko has a record of 9 wins and one loss, while Rigondeaux boasts a 17-0 record. That’s only 27 professional fights between them. However, both of them had a significant amateur career. Lomachenko had a record of 396 wins and 1 loss. Whereas Rigondeaux has a record of 475 wins and 12 losses. Rigondeaux is willing to move up 2 weight classes to take on Lomachenko for the WBO title at super-featherweight, but the Cuban does not seem afraid.

I don’t want to hear anything about weight advantage. I asked for this fight and I got it! It is on. #Dec9 #RigoLoma #NotAfraid 🇨🇺🥊 🇺🇦

Despite Rigondeaux immense boxing talent, most casual fans will not have heard of him. This is because some people have called his fights boring, despite his high skill level. However, Lomachenko, popularity is slightly higher. It has grown significantly since people started making Youtube videos critiquing and praising his unique and ‘matrix’ style of fighting.


This is why both fighters promoters believe this will be an epic fight for boxing fans.

“Rigondeaux is a helluva fighter. He’s not going to be boring with Lomachenko. Lomachenko won’t let him be boring,” said Arum, who used to promote Rigondeaux.

Added Duva: “Lomachenko will make Rigo fight. It will be very interesting. It’s a cool fight.”


Bernard Hopkins previously stated that Rigondeaux is ‘the guy’ and it is the job of the promoters and the media to create the hype around him.

This is a very true statement! I have already written about how the media is too reliant on Ali, Mayweather, McGregor or Usain Bolt type characters whom can sell tickets and get people to watch them simply because of their personalities. It is too much to expect, every sportsperson to be eloquent, funny, brash, controversial, likable or dislikable (to the point you watch in the hope of seeing them lose) as well as amazing athletes. Most sports people are simply very good at one thing; their respective sport. It is too much to expect them to be a self-marketing expert, stand-up comedian, and promoter. It is the promotors and more so the media’s job to explain to fans just how amazing they are, why they need to watch and support them and why they are worth spending their hard earned money to see.

Hopefully, between now and December the Media will put the same energy and coverage they put into Mayweather vs McGregor, for the rest of the real boxing fights.