If you’re an adult who experienced sexual abuse as a child, know that you are not on your own. Many perpetrators of sexual abuse are in a position of trust or responsible for the child’s care, such as a family member, teacher, clergy member (priest), or coach.

When I was five years old, the sexual abuse began by the Caribbean maid who told me to never tell anyone about what she did as she understood me like a commendable companion. She acted as my best friend for many years after introducing me to hardcore pornography (that I stopped watching at twenty after spiritual cleansing) that she told me to keep as a secret between us when I was five. Before my parents divorced, she would be like a second mother to me and told me to keep everything confidential otherwise she would get into trouble.

My parents who were very strict and wanted me to attend church every Sunday with them were not aware that she was sexually abusing me. There would be times that she would attend church with my family. I did not know what she did was wrong until I was thirteen when the sexual abuse stopped. I started to think something was wrong with the entire situation by having a girlfriend who was in her thirties when I just became a teenager. For those years, I was tricked into trusting her because she was a spectacular cook who always prepared the best meals for me; she was always there to talk to about boys that I had crushes on and gave me advice.

Furthermore, we shared the same sense of humour. Imagine growing up in a setting where your best friend was a pedophile who treated you like an adult when you were really a child in a society where your classmates’ parents treated them like young adults. She read me my favourite bedtime stories as well when I was a toddler so I looked up to her as a best friend. When I was young, my favourite books were the Babysitter’s Club, the Famous Five and Goosebumps series. In my teenage years, I started to think that she was evil and really wanted me to be a failure in life. I did not tell my friends or teachers at school about the pedophile because even she wanted me to keep it a secret from them. I never cared for anyone’s sympathy and thought that everyone had problems in their families so if I told them about mine, they probably would not care.

The truth about life is that many people who had similar experiences are also victims of fear because they are afraid of trusting others with that sort of information due to negative stereotypes. People may then classify you as a “problem child” through assumption making. Statistics have shown: 1 in 5 girls and 1 in 20 boys is a victim of child sexual abuse.  According to a 2003 US study, 3 out of 4 adolescents who have been sexually assaulted were victimised by someone they knew well. 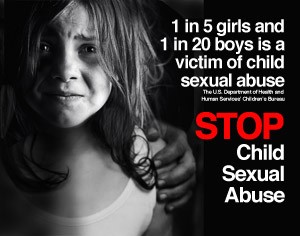 My advice to people who have experienced any type of child sexual abuse is to tell someone in authority right away because there is no way to tell a pedophile apart from anyone else just by looks alone. If you are students in primary school, secondary school or high school, it is very significant that you tell someone who is trustworthy because even teachers can be perverted and prey on individuals in their classes. If you tell your friends they may belittle the entire situation and probably would not have the maturity to deal with you.

The last advice that I have is not because you were abused means that you should mistreat others out of revenge as well. When choosing a boyfriend or a girlfriend, you must be very aware of who you select because many former victims of child sexual abuse may not have good judgment or tend to make mistakes in these aspects of life. They tend to suffer from low self-esteem and have a negative view of themselves. If this issue is something you struggle with, know that you are not alone in the world. However you find yourself, know that you are valuable, worthy of respect and deserve true love and support. No one has the power to take that away from you. If you have intentions of being in a relationship or getting married one day, always remember that although great looks are what attracts the persons to each other at first, remember compatible personalities are just as considerable.

Have you experienced a similar situation?
How did you find the strength to overcome?
Please comment below and share; challenge someone to think a litter deeper