The BBC published an article on how to enjoy the Notting Hill Carnival with your children; it is a fairly useful post. As per usual, they decided to add a stock photography picture to illustrate the theme of the post. However, the picture they chose inadvertently told the bigger story of Carnival; the gentrification of what seems increasingly like a formerly Caribbean festival and of the area it takes place in.

*Stabbings and arrests: Click here to read my defence of carnival and Black culture.


The Notting Hill Carnival began in 1966. It was developed due to the horrific murder of Kelso Cochrane, an immigrant from Antigua and the subsequent race riots. The goal of the carnival was to promote unity, understanding and awareness of Caribbean culture.

However, each year the demographic who identify as Caribbean or British Carribean in the UK decreases; the areas that the Windrush generation populated in Britain are increasingly gentrified and the carnival that they established and grew into the biggest event in Europe, see’s its future increasingly under attack. But, most poignantly the culture and people it represents seem only to be a costume, can of red stripe, a dashiki from ASOS and Black music to be supported for 2 days; whilst ignoring the struggles and wishes for equality of the originators ie Black people, for the remaining 363 days of the year.

I wonder how many of attendees knew who Sam King MBE was or honoured the passing of one of the pioneers of Black British Culture and Carnival.

The change in the demographic of Notting Hill could have simply preempted the change in attendees of the Carnival; both symbolises a generation that left the Carribean, also left the Notting Hill area and increasingly the carnival of its namesake.

Carnival is supposed to be fun and enjoyed by all. This is why it would be a travesty if it did become a ticketed event.  However, its roots in Caribbean culture can not be denied. Thus, what should separate it from Glastonbury or any other generic festival, should be the history and the culture that it is supposed to be honouring and uniting. This is why attending carnival should have more cultural significance than simply buying a ticket to go to The Wireless Festival. All people should be able to attend. However, Black culture isn’t simply around to be fetishised or photographed like an exhibit in a museum or zoo.

It is a sad indictment of the legacy of carnival if people simply adorn Black culture for two days and then ignore the racism on their on friends social media accounts, #BlackLivesMatter movement, inequality in the workplace, media and education for the rest of the year.

There are countless marches and movements that could do with people’s support. That support would help to highlight the issues people of colour face. People should not simply see one group of people as a form of entertainment. Whether that is through enjoying their music, sporting achievements or culture. The enjoyment should make you want to keep some level of awareness or empathy for the issues that impact them.

These issues aren’t always simple explained. Just as “Black” culture can mean a lot of things to many different people. This is why it is sad that carnival seems less of a place where people may actually get more empathy for Black culture and knowledge of its diversity. With that said, Black culture isn’t perfect and is also being watered down and marginalised. But that’s a whole different issue

With that said, just as ‘Black’ culture is watered down so is carnival. Playing or requesting Drake ‘One Dance & Controlla” on rotation isn’t the carnival spirit. Nor is wearing a Dashiki you bought from ASOS. People waste time talking about cultural appropriation of hair; when music and fashion are being ransacked and exploited before their eyes. If a person truly enjoys carnival they should listen to real reggae, soca and dancehall music; rather than just the Canadian pop version of it.

Don’t get me wrong, I like Drake’s songs but they shouldn’t take prominence over the Reggae and Soca music and musicians whose style he is appropriating. Just as a Dashiki is more than just a colourful top. Each pattern is symbolic of a tribe and people’s history. If you are going to buy one at least buy it from an African tailor or clothing shop; not some mass produced ASOS appropriation. There are African people who believe only people of African origin should be wearing their culturally significant clothing. But again that is a whole different discussion.

The “I am not going again!” Crew

This is the status I see all over my facebook every Tuesday after Carnival has finished. The problem here is no one asked you to go in the first place. Just as all can attend, all can decide not to attend. However, there is a significant cultural travesty when Black people feel they can no longer attend.

For Black people in Britain there a few moments of unity and celebration as one people. The moments where we can enjoy our culture and represent our individual islands and countries. Example, each year, I see less and less Flags being worn. Carnival should be awash with flags from all over the Caribbean and African diaspora. It should be a time when you see a stranger adorning the same country’s flag as your own family originates from, then for that brief moment you feel connected, whether through a head nod, fist bump, hug, conversation or dance. 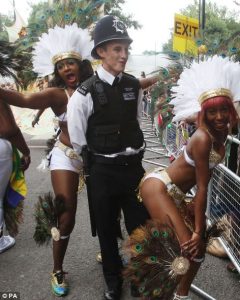 Yes dance! Carnival culture from the Caribbean expanded to Caribana in Canda, Rio in Brazil or Notting Hill in England is a place of colour, dance and self-expression. Like it or not, support it or don’t, love it or hate it that culture and atmosphere can often manifest itself in what some people will view as even passionate or sexually charged.

‘A dance is a vertical expression or the horizontal desire’

People dance with each other and have fun. Coming home and complaining about that fun is like me going to Glastonbury and complaining that I got wet and muddy. However, it has to be said that ‘fun’ still needs consent. With 1-2 million attendees there will always be some guys who take things too far and they cannot be excused. However, it is impractical to expect no one to try to talk, chat you up or initiate a dance with you; especially, whilst you are in an atmosphere of dancing, strangers connecting and people expressing themselves with Caribbean rhythm and energy. However, that same person should be happy to accept a “no thanks” and subsequently move on.  As I said there is a difference between slight rain and mud and someone burying you in a mudslide and drowning you in unsolicited water or in this case touching and/or attention.

There is no excuse for the crime that happens at carnival. But let us not forget that 2 million people attend carnival each year. That’s 20 times more people than attended The Epsom Derby. The same Epsom Derby that early this year Riot police had to be called in to stop a mass brawl, fighting and violence. Oh and let us not forget the recent football hooliganism at the Euros; I didn’t see many Caribbean or African faces in the news reports about the horrendous violence in France.

4 people were stabbed this year at Carnival. Let’s keep it real that sh*t needs to stop! But it is an issue that goes further than a two-day event.

99.9% of people who attend carnival aren’t subject to any form of criminality. Yes, there will be silly young boys who lack the patience to move through a crowd without being aggressive. There will be those who get too drunk. However, people acting inappropriately under influence of alcohol or mass groups being silly is not new news.

A free event with such large numbers of attendees will always have some sort of trouble. Let us not paint it out to be a war zone. Yet, it always seems comments about the crime that takes place at Carnival, are secretly statements about Black people in general. When in fact, as I have said carnival is pretty gentrified; some people of all races get drunk and disorderly at carnival these days. No different to some festivals and football games… 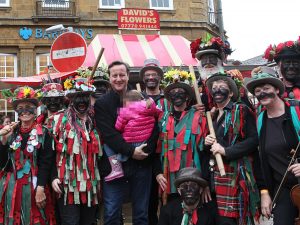 David Cameron in the middle of Foxs Border Morris in Banbury, Oxfordshire.

In short, carnival is still an event where people can have fun, rep their island, enjoy black culture, dance, hear music, see old friends, make new friends and express themselves. However, if the people who originated the carnival aren’t supported then the life blood of carnival will disappear and British people will have to go back to Morris Dancing Festivals and some casual Blackface perpetrated by the Britannia Coconut clog dancers of Lancashire. Yes, Blackface still happens and is still wrong!

So Black people need to keep supporting Carnival and the White[some] people who enjoy it, should expand their empathy beyond two days of the year.

I would suggest the Black people thinking about no longer attending or already not attending, think about how they will feel if carnival disappeared through a lack of support from the community. With that said, you can still go to the reparation march or slavery memorial day event each year. Both, are great places to have that community and culturing feeling just without the hedonism. (The videos can be found here)

FYI the police do a great job at carnival. Support #BlackLivesMatter isn’t anti-police. It is pushing for a better and more accountable police and justice system. This would support the many good Police Officers.

By
Antoine Allen
‘3c’s of life, choice, chance and change; you have to make the choice to take the chance if you want anything to change’
@Antoinespeakson
www.youtube.com/antoinespeaks

Let us know your thoughts
Did you attend carnival?
Did you have a good or bad time?
Do you think cultural events like this need to be protected?
Please comment below and share; challenge someone to think a little deeper