Her Family have shared this photo of Fredzania Thompson, taken moments before the incident in Navasota, Texas.

Local police have reported, Fredzania was hit by a train after stepping out of the way of previous one.

It was her first ever photoshoot, her mother told local newspaper, The Eagle.

“That’s definitely what she wanted to do,” Hakamie Stevenson said about her daughter’s ambition.

“It’s what she had started to do the day she was deceased.” 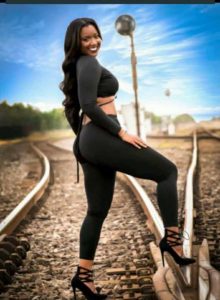 Fredzania Thomson, the day of her death.

Chief Leeth of the Navasota police told BBC Newsbeat they are investigating the incident.

“We have an ongoing investigation but nothing to suggest there is any criminal activity,”

According to BBC Newsbeat, the driver of the train which hit Fredzania tried to warn her as he approached.

“Apparently, there was a photo session being held on the tracks,” said Jeff De Graff of Union Pacific, a spokesman for the company who run the train which hit Fredzania.

“As the train approached, the crew saw the photographer and the other individual on the tracks, alerted them with the train horn and also began the emergency stopping process on the train.”

This incident is one of many recent deaths involving people taking pictures or making selfies in extreme environments. Parents need to especially warn their children about the need to properly check whether it is safe to take a picture.

Fredzania’s funeral takes place on Saturday 18th, March. Her family have set up a GoFundMe page to help with funeral costs.