In America, it is Black history month, a time for the celebration of Black culture and identity. However, one teacher seems to have missed the memo that Black history month is not an excuse to wear blackface; no matter how benevolent a person’s intentions might be.

A local California school under fire for allowing the use of Blackface during a presentation. We’re getting reaction from the school superintendent as outrage from students and parents grows. Details at 10 p.m. on @FOX40 pic.twitter.com/M97HSpbcLR

The Sacramento, California, teacher was allegedly delivering an assembly about David Livingston‘s missionary work. However, in order to ‘bring the lesson to life’, the teacher decided to dress as a Central American of African descent, including applying blackface paint to her skin. Shocking, right?

“I was wrong to allow the use of makeup no matter how innocent the intentions as it has offended some of my students and parents,” the superintendent wrote in a public statement. “I should have anticipated that this could be offensive, and I apologized to my students and parents asking to be forgiven for hurting them.”
Thus far, the teacher in question has yet to be identified but a former student spoke with Yahoo News saying, “I recognize the woman who wore blackface — she is oblivious,” the 19-year-old former student said anonymously. “It was very upsetting, especially because the kids in that class are so young.” Agreed! What the hell.

As most of our regular readers know, Antoine Allen, recently made a documentary about Blackface in Holland.

In the beginning, Antoine speaks of how most people know blackface is wrong in America. However, it is quite shocking in this case that a history teacher seemingly thought her actions would not cause offence.

There will be some people who will defend this teacher’s actions. The main excuse will be their belief that she did not intend to offend anyone. Some will argue that she simply wanted to engage her students. However, despite potentially benevolent intentions, she is still deeply misguided and her actions are still racist.

Blackface represented two types of racism. The first was the derogatory stereotyping of black identity. This could be seen in the characters like the one seen in The Birth Of A Nation, a blackfaced rapist, in need of being killed by the KKK.

The other side of blackface, was when white actors played black characters so that the film did not have to hire a black actor or person of colour. This is similar to this instance.

The school could have brought in an African-American teacher to deliver this lesson with that now necessary, balancing element of critical thought, from an uncompromisingly Black perspective. This would have brought specific knowledge to the class and diversity. Rather, than this offensive alternative.

Although, we do not know the nature of the lesson. Members of the Black have ed that there is clearly a serious problem if David Livingstone and issues around him and the colonial era are still being taught uncritically and from an overwhelmingly pro-White, anti-Black/African perspective.

Therefore, it is deeply troubling when a teacher, someone who is supposed to educate our children, does not know this racial faux pas. We want to believe that this instance is just another one off, but it seems like it is indicative of a growing issue. 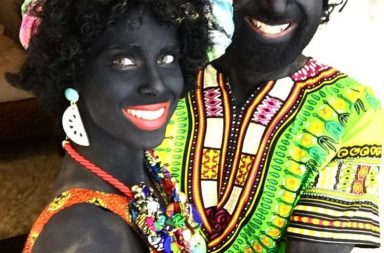 What is Blackface? Racism. Why is it Racist? Black People Are Not Costumes: Here’s 4 Reasons Blackface Must Stop