However, this little boys young life has already had more ups and downs than the BMX tracks he races on; he has had to fight against unfair and saddening hardship. Trey-Wayne Saunders’ parents say he was bullied at school and once came home with footprints on his shirt. The bully was so severe that his parents Wayne and Denise decided they needed to home-school their son. 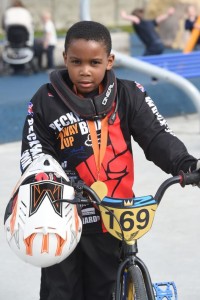 However, despite these sad bullying experiences Trey-Wayne has managed to find the confidents and talent to become a potential future BMX star.

On March 19, Trey-Wayne won the first of five London 2016 BMX series races for novice under-7s in Peckham at Burgess Park.

Trey-Wayne’s performance and story has not fallen on death ears. He has already received the praise and admiration of current Olympians like Shanaze Reade.

Reade, 27, said: “I started BMX when I was 10, which is much older than Trey-Wayne, but it helped me express myself and it obviously helps him too.

“As well as keeping him active and fit, it will build his confidence in all manner of things like social skills and becoming who he is. “I wish him all the best and hope to see him on the pro stage very soon.”

Over 16,000 children are absent from school due to bullying. NSPCC figures suggest nearly half of children and young people (46%) have been bullied at school at some point in their live. 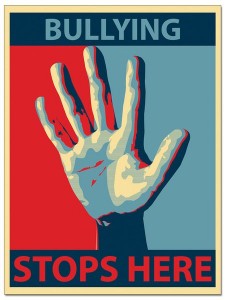 Trey- Wayne’s Father Mr Saunders said: “It was heart-breaking for me and my wife. He was like a different child. He was quieter and his academics suffered. “But BMX gave him something to focus on even though he had lots going on at school. It’s what helped him through.”

Trey-Wayne said: “It felt like I was flying when I went past the finish line. I was bullied at school and a boy kicked me and punched me which hurt sometimes and made me feel sad. BMX gave me confidence.”

Trey-Wayne was inspired by his Olympian admirers. He said his dream was to become an Olympian like Phillips and Reade; a five-time world champion..

Colin Humphreys, national development manager for British Cycling, which organises the event, said: “Trey-Wayne is an inspiration to all young people who are going through a tough time.

“His story proves that sport has a unique offer — it isn’t just about learning new skills and getting active, it helps to build confidence and is a fun way to socialise and make friends.” 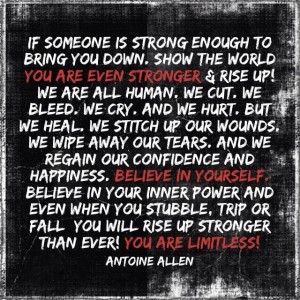 Hopefully this boy will give inspiration to the many other children whom sadly are victims of bullying.

What are your thoughts?
Do you wish their were more alternative sporting activities for children to enjoy?
Let us know your thoughts and comment below.