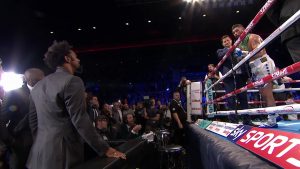 *This was written before fight was announced- but still a great read.

With the dust having settled on the melee that followed Tony Bellew’s victory over BJ Flores, talk has been rife over a super fight between current cruiserweight king Bellew, and former heavyweight world champion David Haye.

The eccentric Evertonian, flattened American BJ Flores in emphatic style in October; however, as soon as referee Ian John-Lewis brought an end to proceedings, the 33-year old was off like a shot, making a bee-line for David Haye, who was sat ringside doing punditry.

Thankfully, his progress toward Haye was halted by a throng of security who were on hand to make sure nothing kicked off. The pair seemingly traded insults, before the Bomber was ushered back into the ring for the post-fight interviews. If Bellew’s performance in the ring was impressive, it was nothing compared to his show-stopping performance on the microphone.

Let’s not forget the last time somebody got in David Haye’s face – it ended with one man suffering a broken jaw, another having stitches in his head, a thrown tri-pod, fines and suspensions.

Compared to that, this was something straight out of a WWE playbook.

Bellew is a rare find in the sporting industry. A  well-spoken, humble, family first, and likeable boxing pundit by day, but a different beast altogether when he is in fight mode. Once that switch his flicked, his character changes like the wind. In the blue of his beloved Everton, he becomes an aggressive hothead who is always bubbling on the edge, not unlike his character, ‘Pretty’ Ricky Conlan, who he played in the Hollywood blockbuster ‘Creed’ alongside the iconic Rocky Balboa.

Former WBA heavyweight champion David Haye is a loveable rogue, who’s charming, silver tongued persona out of the ring, transforms into a vicious, nasty piece of work who loves fighting as soon as the beat of McFadden and Whitehead’s ‘Aint no stopping us now’ hits. As well as his boxing career, he is also known to a wider audience due to his lavish lifestyle and his foray into reality TV.

This seemingly leads to a mouth-watering, pay-per-view football stadium clash next year, right? Well, no, not exactly. The fight is appealing, don’t get me wrong. There appears to be genuine vitriol between the two, certainly on Bellew’s part and it would undoubtedly be a fun fight and the build-up would be on for the ages. Both know how to sell a fight. It would be all that is a weird and wonderful with boxing. But, does the fight actually make sense for either fighter? 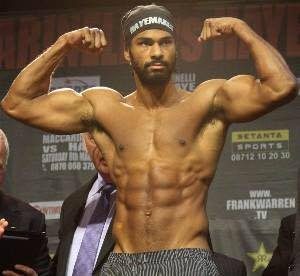 For starters, they campaign at different weights. Since moving up from Light-heavyweight, Bellew comfortably makes the cruiserweight limit. Despite being a similar height to Haye, he is in no danger of struggling to make 200lbs. Matchroom head honcho, Eddie Hearn, has suggested that Bellew would simply add extra muscle by moving up to heavyweight, which he almost certainly would have to do to get the fight.

Haye’s last fight at cruiserweight was in 2008, when he obliterated Enzo Maccarinelli. Since then, he has been a permanent fixture at heavyweight, transforming his body from a ripped 14 stone 4lbs, to a solid 200+lbs, which is a process that takes time to successfully achieve. Since then, Haye has never weighed lighter than 210lbs. The chances of him agreeing to fight back down at cruiserweight are slim to none.

Next, the Liverpudlian’s mandatory challenger Mairis Briedis is eager for his shot, having already stepped aside so that the BJ Flores fight could happen. Bellew will have to defend his title vs Briedis next, unless he gives up the title, or hopes that the WBC gives him permission to challenge Haye and keep his title.

The Bomber also has options at cruiserweight. There are big fights out there with Denis Lebedev, the IBF and WBA champion and Oleksandr Usyk, the WBO belt holder. A fight with Lebedev, whilst less glamourous, is a fight that the Bomber is more than capable of winning and in doing so, would follow Haye in unifying the division. Bellew looks happy and settled as a cruiserweight, and if he wants to prove he is the no.1 in the world, unifying the titles would certainly prove it. 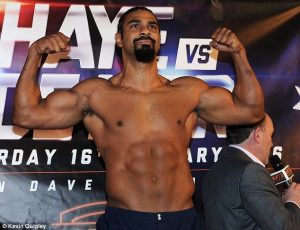 Haye 2.0 might be a little heavier than the younger version, but armed with new trainer Shane McGuigan, he has looked just as fast, aggressive and powerful since his comeback, despite the sorry state of the opposition.

Haye has been trying to convince everyone that he is injury free and ready to prove that he is the best heavyweight on the planet. If he fights once more this year, it will make 2016 the most active year he’s had since 2006. The Bermondsey man will never be an active fighter due to his celebrity status and age, however, he keeps himself in shape and is still capable and motivated enough to prepare himself for a mega fight or two.

With Tyson Fury vacating his titles, it has opened up the heavyweight scene. After weeks of discussion, we now know that IBF champion Anthony Joshua will defend against Eric Molina and if he wins, he will face former unified champion Wladimir Klitschko next year for the WBA ‘Super’ title. We know that Shannon Briggs, (LETS GO CHAMP!) will face Lucas Browne for the ‘regular’ WBA title in the meantime. In addition to this, we know that exciting New Zealander Joseph Parker will face Andy Ruiz Jnr for the WBO title – with the winner being ordered to face the Hayemaker.

With this in mind, Haye appears to have a number of options to get his hands on a title. He could sit out until next year and wait for the winner of Parker vs Ruiz Jnr for the WBO title, or he could take the WBA regular route and face the winner of Browne vs Briggs. Whatever he decides, he doesn’t appear to be far away from a title shot in 2017.

Both Tony Bellew and David Haye have positioned themselves to achieve their goals in 2017. Bellew can become only the 2nd British fighter to unify the cruiserweight world titles and David Haye can blast his way to becoming a two-time world heavyweight champion and both can cement their names in British boxing history. Fighting each other doesn’t fit into those plans.

It is clear that Bellew is looking for a marquee fight. A big fight against a big name, for big money. The downside to being a cruiserweight is that there is currently nobody in the division to make him the kind of money that Haye would. So it is understandable.

For Haye, sharing a ring with the likes of Anthony Joshua or Deontay Wilder (Tyson Fury too if he returns to the sport), is what he needs to be doing if he is to add authenticity to his standing amongst the boxing greats when he retires.

So the question remains, would a fight between the two outspoken bangers, be for legacy or purely for the money?
By Chris Jessop
To carry on the debate Tweet Chris Jessop at @MrChrisJessop