Scientist Emma Sherlock said she was "bowled over" by Dave's size: BBC's Innuendo Did Not Go Unnoticed

The BBC knew exactly what they were doing when they wrote ‘Natural History Museum scientist Emma Sherlock said she was “bowled over” by Dave’s size’. I can imagine a journalist sipping some tea and  chuckling to themselves as they typed that.

They managed to turn a feel-good story about Britain’s biggest earthworm into a ‘that’s what she said’ innuendo. At least to those of us with minds as dirty as the compost heap Dave the earthworm was found in.

BBC Reported, Dave the earthworm has become  the largest ever found in the UK – measuring a record-breaking 40cm (15.7in). 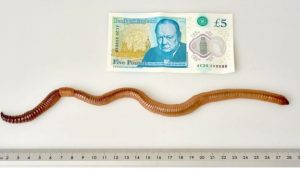 Experts at the Natural History Museum confirmed the achievement of the annelid after it ventured above ground in a vegetable plot in Widnes, Cheshire.

The Lumbricus terrestris was studied at the museum before being euthanised in “the sad bit of science”.

The 26g (1oz) worm was found by Paul Rees and was subsequently named Dave by his stepson George.

The article included a picture and quote from Scientist Emma Sherlock holding Dave the earthworm. However, when the quote was cut down in order to caption the picture it took on a whole different meaning. 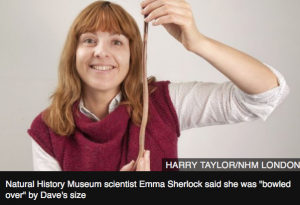 Natural History Museum scientist Emma Sherlock said: “I was bowled over by the size of this worm when I opened the plastic box they sent it in.

“Not only was it really long, it is almost twice as heavy as any other wild earthworm ever seen, weighing the same as a small chocolate bar.

“Dave is now preserved in the museum collections, and will now be useful to science.”

Surely, there were plenty of Sherlock related puns they could have used…

This whole story is perfect. ‘A giant worm called Dave has been found by Sherlock ( aka @EmmaSherlock4 )’ ? https://t.co/uQI56wxIdl

With that said, it is nice to read a lighthearted news story whilst we are in the midst of Hillary Vs Trump and Brexit Vs anyone hoping common sense will overrule public opinion.

Let us know your thoughts on Dave
Have you seen any large insects in your home or garden?
What feel-good stories have you read recently?
Please like and share; challenge someone to think a little different

Please like our page; there are lots of interesting videos and more blog posts www.facebook.com/antoinespeakson