Remember the ‘angry‘ police officer that smashed Leon Fontana’s car window as he filmed the officer’s questionable behaviour, during a traffic stop? Well,  PC Joshua Savage has been charged with threatening behaviour, assault and criminal damage.

The London Evening Standard has reported:

Pc Joshua Savage is also charged with possession of a bladed article after an investigation by the Independent Police Complaints Commission.

Motorist Leon Fontana, 25, was apparently pulled over in a case of mistaken identity while driving in Camden last September.

The officer demanded the driver get out of his vehicle and when he refused began striking the windscreen shattering the glass.

The officer is then filmed slicing through the shattered windscreen with what looks like a penknife.

Many people asked what had happened since the incident in September, 2016. It seems as soon as the footage filmed by Leon Fontana ‘went viral’ the police were made aware of the incident. Subsequently, PC Savage was placed on ‘restrictive duties’ and The Crown Prosecution Service started their investigation.

Videos such as this one, are the reason why the #BlackLivesMatter campaign was also adopted in the UK. Although, far less Black people or people in general, are killed by the police in the UK. Notable cases such as Mark Duggan and Stephen Lawrence investigation have exposed the often poor relations between the police and the Black British community. 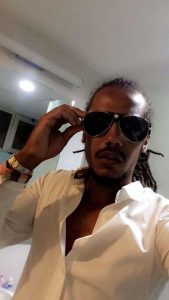 The Metropolitan Police said officers believed Leon, pictured, was a man of interest to them

At the time Leon told The Sun:

He[leon fontana] said how he was “scared” when the officer began hitting his window, adding: “I was driving back to my house, I’d been getting some electric for my mum.

“Two police officers decided to pull me up, they put their sirens on and went in front of me.

“I indicated and pulled up, one jumped out and I just asked him what the problem was and he said he wants to see ID and get out the car.

“I told him I will show him my ID but wouldn’t get out the car because I didn’t need to.

“I’ve had a full licence for just over two years now.

“He was adamant I needed to get out the car, he thought I was going to drive off but I took the keys out of the ignition and showed him they were out.

“He got very agitated and angry and started to open my car door but it was locked so he pulled on the window and then banged on it five or six times.

“This has happened before but not to this extreme, this is the first time I’ve got it on camera.

“I don’t know why he pulled me over, I think he thought I was someone I’m not, but he wouldn’t answer my questions.

“He said he didn’t need to do a licence plate check, I sounded calm on the video but I was in shock, everything was going so slowly.

“How he was acting was inappropriate and I was scared for my safety.

“They asked me who I am and I told them, I haven’t been involved in the police since I was a youth, around eight years now.”

Incredibly, after the incident, Leon was allegedly given no information about why he was stopped or if he would have to fit the bill for his car, which he was forced to drive away and park up on a nearby street.

He later went to hospital where he was treated for glass fragments to his eye and swelling to his face after allegedly being assaulted.

He continued: “I wasn’t taken away, arrested, charged, they just drove off and told me to park my car around the corner.

“They gave me no information, just a stop and search slip, so I contacted them to ask about my car and an officer came and saw me today at the hospital.

“I went to hospital because I have swelling from being assaulted as they pushed me up against a wooden fence and I got glass fragments in my eye from when he was smashing the window.

“The officer in the hospital wasn’t the same as the one who smashed my car, but I was told that officer wouldn’t be patrolling today which I don’t know if that’s true or not, but when he told me that it made me safer.

“It’s these kind of officers that are not doing their job right and going against the law.

“The public should feel safe and I didn’t feel safe.!”

Being a police officer is not an easy job. However, conflict management should be the prime tool in defusing any potentially volatile situation. This PC’s behaviour is especially troubling with the MET calling for more armed officers to be on the streets. Imagine if this had happened in America; Leon could have lost his life.