Millionaire Gamer PewDiePie has been caught using the N-word during an online Broadcast. Yet, he is just one high-profile example of the casual racism that takes place in the online world; especially during competitive gaming! Someone think of the children! Here’s my a quick story of my own experience of the casual racism in the gaming world and how behaviour like Pewdiepie’s makes gaming less enjoyable for Black people.

The world’s highest-paid YouTube star, PewDiePie, has used the “n-word” during an online broadcast.

The Guardian went into more details:

The 27-year-old video blogger called an opponent a “fucking n*gger” while live-streaming playing the online game Playerunknown Battlegrounds, before correcting himself to “fucking asshole”, adding: “I didn’t mean it in a bad way. 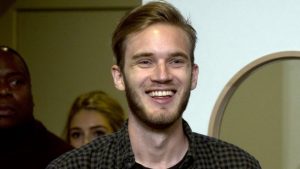 Let’s keep it real,  there is no other way to say ‘fucking n*gger’. Just as this is most likely not the first time PewDiePie has said this phrase during gaming(or even life). He is just one example of people being caught saying something their bank balance later regrets. However, even more so he is an example of the toxic side of online gaming.

Often people with masses of followers and a popular media profile that is dependent on a having a brand-friendly image, seem to always ‘not mean things in a bad way’. Celebrities such as Justin Bieber, Paula Dean, Mel Gibson, Donald Sterling, Hulk Hogan, Dog The Bounty Hunter and many many others have been caught making racist remarks behind closed doors or during recorded arguments.

Yet, most people will never hear another person’s private phone call or backstage rant. However, the online gaming world is an open platform where those same negative statements become part and parcel of the online experience for many Black gamers. We are either the butt of a joke or the casual racist ‘banter’ from an angry kid living in their parent’s house.


My Experience Of Casual Racism Online

I can remember my mother bought me an Xbox 360. I was very excited to get into the online gaming world; Call of Duty! However, there was an air of trepidation in my excitement. I had hoped the online world would not be as bad as the real world I lived in. My hope was that I could enjoy gaming without having to be subjected to a barrage of racist abuse. Surely, this was a fair hope to hold, seeing as this was long before webcam gaming, thus no one could see that I was Black. I was free to just be another person enjoying shooting random strangers. Sadly, I was wrong!

I sat down, turn on the X-box and waited to join a match on Call of duty. A Call of Duty match could potentially bring together an array of people from across the globe. Personally, I am British, but I am not from one of the places that have distinctive accents. So, my voice at the time, apart from being high-pitched, would not have revealed where I was from in the UK or even so much what ethnicity I was. Yet, after getting onto a lucky kill streak, one game decided that I was a ‘dirty n*gger’. Each time I killed him his verbal attacks increased. Just as my in-game attacks on him increased. The only, good side of online gaming racism, is that you can actually attack the person who is abusing you, without knowledge and fear that you will soon be police handcuffs. A person of colour can attempt to bruise the ego of the racist gamer, by simply being better at them at the game. However, my gaming was more miss than hit. Thus, a game gets ruined when you lose and on top of that someone calls you a ‘loser n*gger’. Yet, in truth, besting some online abusers character a few times, is not comparable to them racial abusing you for 20minutes. 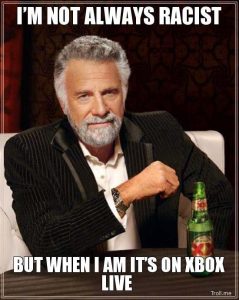 For many, online gaming can be a place of escapism through anonymity, unchecked aggression, and bravado. The combination of all of these creates a perfect storm for people to abuse strangers across the globe, this is despite them playing in a what should be a safe space for friendly competition.


Yet, in my case, it was more an eye-opening experience for my friend who was white. He would have to sit next to me as either of us played the game. He was given a taste of what it is like to be a Black person, even when people can not see you are Black. I could see the embarrassment on his face as there was nothing he could do to stop what was happening. Just as there was nothing that I could do but argue back. But an argument online rarely ends with ‘oh, my bad, I am really sorry that I offended you’. The lack of accountability for someone’s words and actions, allows people to truly express their true feelings, wishes and intentions with little care for the unlikely repercussions.

Just as PewDiePie said maybe many of those teenagers ‘don’t mean that in a bad way’. Yet, to that excuse, I use this example. If you punch someone in the face, your intention behind the punch doesn’t stop the pain, bleeding or anger. Casually punching black people in the face online is not acceptable. But no doubt PewDiePie will survive his second accusation discriminatory behaviour. He previously paid people to hold a sign that said ‘death to all Jews’. But I guess he did not mean that either- it was just ‘banter’.

This is the privilege people who say racist slurs and racists jokes have, they excuse everything as just banter or a joke. Without aforethought for the person who does not find their content remotely acceptable or funny. They have the privilege of not needing to care about the person who simply wanted to partake in some escapism, in the hope they would not get verbally punched in the face by a stranger.

Some of you are thinking ‘but Black people say the N-word…  if Black people did not want people saying it, why do they say it’ or even ‘how comes black people can say it and White people can’t?’. Well, do Black people say the n-word? No, some Black people say the n-word, not all! There’s no hotline that all Black people have. There is no meeting we have to decide which words, dancers or trends we will be propagating this year. Each black person is an independent person with their own perception of what is and is not acceptable. Many Black people do not say the n-word. A person could argue that it is predominantly African Americans that say the word. Just as a person could argue that not all of those African Americans agree with anyone saying it, let alone Black people. Therefore, without going into the history behind the word, I can simply say that if there is one Black person who finds the word disgusting and chooses not to say it themselves- then every non-black person should follow their example. Why? Because one day you might just come into contact with at least one of the many Black people who do not want anyone saying it, especially non-black people. That interaction may not have an amicable ending for you.

Yet, the prevalence of casual racism in America means that sometimes I feel like the last generation that does not want it to be commonplace to hear people casually using a word with such a murderous, racist and heinous history. Yet, I would still hope that people could enjoy gaming without having to racial abuse each other to do so.

Gaming for many people is a chance to escape the reality of real life. It is a place to become a soldier, sports person or essential a hero. In other words a ‘winner’. Those moments of winning become tainted or even ruined when another gamer uses their gaming experience as an avenue to escape into their racist, sexist or prejudice persona. The world is already far too racist, at least allow people a place to escape from it; banter or not.