Why People's Rants on Terrorism Need To Remember The Bigger Issue

This week Britain comes to terms with another terrible extremist attack. 22 people lost their lives and over 59 people were injured. Some people will be waking up for the first of many sad times without a daughter, son, mother, father, brother, sister or friend. This week will sadly be their first of many mornings. Some people, who managed to survive the attack, will live on with injuries, scars and memories that will never truly heal. Some people who were not present during the attack, but will live, work or visit Manchester, will have the ‘that could have been me’ feeling of sorrow and unsatisfying relief. Whereas, some people with very little connection to Manchester, will just mourn for an attack on Britain or for an attack on life itself.

In the end, our distance from tragedies like these determines how we react. This distance can be geographical, but more so the distance is measured in empathy and knowledge. It is this distance that qualifies the nature of terrorism, extremism, and war in the western world. It is this distance that determines the nature of the statuses you will see going down your Facebook or social media timeline.
There will be those whom simply wish well to the families of those affected. I would hope that this is a universal wish. However, this is not always the case. There are those who use tragedies such as these, to say something they always wanted to say. Whether it is anti a certain group or to qualify the death in comparison to what is happening in other countries. In the end, we all have an opinion and for want of a better phrase- ‘viral’ tragedies are the time in which people proclaim their truest opinion of the world, politics, religion and society.

Most of our statuses are born from a prior knowledge, prior ignorance or prior hope. Therefore, a reaction to an event is usually indicative of how a person truly feels about the world. An on-going news story such as the attack on Manchester Arena, London’s Westminster or a New york street, does not immediately give enough information for a person to truly cast an in-depth factual opinion. However, the paradox is that there are more than enough questions yet to be answered, to enable someone to fill the gaps with their own perspective of the world. Whether that perspective is: one of hope- simply asking for unity and united strength; one of cynicism- stating a lack of belief in the events and questioning its authenticity or one of ignorance- using this opportunity to brandish one group of people and to spout generalized rhetoric about their ‘inherent’ evil nature, book or ways.

Yet, a week or so from now the chatter on social media will die down. There will be another news story that will occupy people’s minds, thoughts and social proclamations of truth and guidance. But, as the story moves on for us, we must begin to remember the story does not move on for the people whom actually lived or worst died due to the tragedy. Any tragedy is just a story to some but real life to others. It is this distance in connection to events that should make us realise just how fortunate we are. It is this distance that should make us qualify our reaction and think a little bit deeper on the way we engage with such tragedies.

We should look to ask ourselves how much do we know and how much are we going to find out. If we are simply going to rant and move on with our lives, surely, that is indicative of just how little these events have affected us? Or will we look to actively examine causes, reasons, and solutions on how to stop more families experiencing the heartache of those from Manchester, London and our global community? I would hope it is the latter.

Our discussion, debates and even arguments are only fruitful if they come with the goal of creating a better understanding for a better future. Otherwise, we are simply flexing our self-appointed intellectual chiefdom in order to score likes, shares and the praise of the Facebook sheeple we heard in the echo chamber of our social media ‘friendships’ and followers. 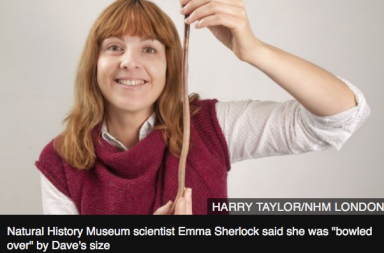 Scientist Emma Sherlock said she was “bowled over” by Dave’s size: BBC’s Innuendo Did Not Go Unnoticed