Anaheim, California, USA, a 13-year-old boy and a group of teenagers are lucky to be alive after an off-duty police officer allegedly ‘accidently’ fires his weapon at the group during an arrest.

Christian Dorscht, a 13-year-old male, is seen being dragged and detained by an off-duty police officer in this video. The officer alleges that Christian said he would ‘shoot him‘. However, Christain states he said he would ‘sue‘ the officer after he allegedly verbally abused Christian’s female friend and assaulted Christian. In the video below and above you can see and hear the altercation:

In the video below and above you can see and hear the altercation:


Key statements from the video: 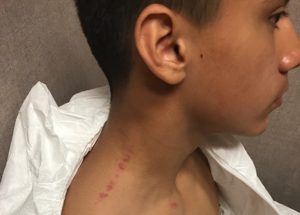 ‘A group of teens were walking home from school yesterday afternoon in the West Palais neighborhood of Anaheim when a resident confronted them. The off-duty Los Angeles policeman apparently complained that they were walking on his property. Words were exchanged, the man grabbed a 13-year-old named Christian (per the Facebook post of a woman claiming to be his mom), and kids whipped out their smartphones to film what happened next, a video that’s since gone viral.

According to Anaheim police, Christian threatened to shoot the man, which led to the cop trying to cuff him. “You’ve been resisting this whole time,” the man told Christian, who can be seen in the video clutching the youth and refusing to let go. “Punch a kid in the nuts, that’s a little pussy move,” Christian responded. “Let me go, for the last time!”

Christian alleged in the video that the off-duty cop called a girl a “cunt” when telling her to get off his property, and then tackled him first when he stood up for her.

The verbal exchanges led to the off-duty cop dragging the kid towards some bushes. It’s unclear from the tape if he ever identified himself as a police officer. “I’d understand if you were a cop, but you’re not a cop,” Christian told the off-duty officer at one point during the video.

Anaheim police finally arrived to detain Christian and his friends. He was booked at Orange County Juvenile Hall for criminal threats and battery. Police arrested a 15-year-old for assault and battery before releasing him to his parents. The Orange County District Attorney’s (OCDA) office will review the case.’

The mother of Christian plans to seek legal presentation and potential sue the officer once Christian’s case has been reviewed. There are also plans to protest the alleged police brutality.

“I’m pretty pissed off about what happened,” Dorscht says. “You could talk to anybody, my son has very good manners. He does good in school and isn’t disrespectful or anything like that.”

“We’re going to find legal representation and be suing,” Dorscht says. “This is B.S. Even the cops, when they got there, they had all the kids down. They didn’t even go after the guy.”

Whatever, the result, this video once again shows how close life and death is when a person is in a confrontational situation with an American police officer. Some people would question where the conflict management skills were before the officer felt he needed to arrest anyone. If 13-year-old boys were so unruly, teachers would be bringing weapons into their classrooms every lesson.

Let us know your thoughts
What did you think?
Who do you think is telling the truth?
Do you think the teenagers should be charged or charges dropped?
Please comment below and share; challenge someone to think a little deeper