Over a million people attended Notting Hill Carnival 2017 and overwhelmingly the majority of those attendees went home happy, unharmed (except sore feet) and not in police handcuffs. However, the media would have society believe Carnival was a war zone, with people running for their lives on every street. Sadly, Carnival has become an example of how the media can push an agenda to the masses. 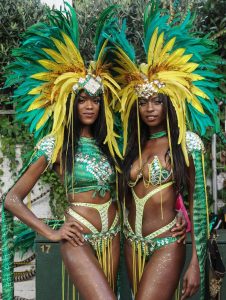 Once again, Notting Hill Carnival‘s fight for survival continued on for its 51st year. 2017’s carnival was two days of celebrating the Caribbean and African culture, record breaking sunshine, vibrant costumes, smiling faces, gyrating hips, happy people and unity for those who lost their lives and homes due to the Grenfell Tower Fire. However, the statistics of the 313 arrests and ‘supposed acid’ attack have left an image of Notting Hill carnival as ‘chaos’ if you go by The Express’s sensational headline.

The police have once again called for the event to be stopped despite a decrease in arrests.

Carnival is fast becoming a prime example of how the media can influence people’s perception of an event simply by picking which parts of the story to tell ie how to spin the truth in a way that best matches their agenda. As Malcolm X said:

“The media’s the most powerful entity on earth. They have the power to make the innocent guilty and to make the guilty innocent, and that’s power. Because they control the minds of the masses.”


Every year Carnival is accessed by certain sections of the media by the amount of crime that takes places. This negative press takes precedence over the vast majority of positive pictures, stories and experiences most people have from their time in Notting Hill.

Commentators such as Katie Hopkins take particular pleasure in documenting anything negative that happens at Carnival. Even though the supposed ‘acid’ attack has been downgraded to a ‘liquid attack’.

8,000 police. A ring of steel. And still, another acid attack in Khan’ts London. . #NottingHillCarnival https://t.co/R2QEIuBBZs

Yet the problem is not acknowledging or reporting the negative aspects of Carnival. The issue is when people or the media focus all their attention on the negative news despite it being statistically minuscule in comparison to the positive. Or even, other festivals with even fewer attendees but more crime committed in comparison.

Last year, I wrote in defence of Notting Hill Carnival and Black culture and people. Many people agreed with what I had to say and a few media organisation have basically copied my points on crime at other festivals. Yet, I had hoped a year from now the conversation would have moved on. However, it has not. The question is why?

Well, statistics are merely raw numbers. It is the interpretation of statistics that provide them with their meaning or what we infer from them. There are sections of mass media that interpret carnival statistics in the best way to pander to their audience. An audience that has not been and never will go to Carnival. An audience that sees Carnival as little more than a drain on resources. And, sometimes an audience that lives in Notting Hill and wishes the carnival took place somewhere else ( Last year spoke about the impact of gentrification on carnival). Thus, the media panders and perpetuates the ignorance and lack of awareness of those whom will click, share or buy what they have to publish. This basic agenda is the foundation of  1900’s Yellow Press, general Media bias and our new epoch of fake news. 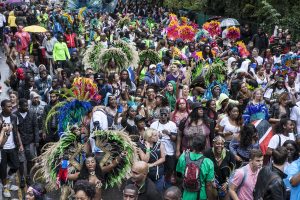 Sadly, in Carnival’s case, the potential impact will be the death of Notting Hill Carnival due to a minuscule amount of crime. The impact is the number of people whom decided to stay at home due to a statistically unlikely fear of getting hurt. The greater impact is the lack of cultural awareness, appreciation and support for Black culture and people; along with the generalisation and stigmatisation that comes from generating negative press for a Black event ie ‘black people be like…’.

Yet, for me what is truly sad is the parents that do not feel comfortable bringing their children to Carnival due to this perception. Or even some adults.

People need to realise Carnival is more than just music, food and colourful costumes. It is a taste of the Caribbean and African culture. It is a place for unity, nostalgia, coming together, reconnecting and making new friends. It is a chance for younger generations to see sights, sounds, cultural history and expressions of the Caribbean without having to get on to a plane to the West Indies. For instance, my niece went to her first carnival this year with my sister. I would hope Carnival survives long enough for her to go with her friends and one day take her own child. A part of me feels like the carnival she attends in the future will be vastly different or simply won’t exist.

Therefore, those of us who do appreciate Notting Hill Carnival need to constantly promote the good news and push back against the negative news. Not for ourselves, but for the future generations yet to experience the two days we love. Yet, we must also work to make it as safe as possible so more parents feel comfortable bringing their children; even though this year had less crime than last year. There was even time for this Police Officer to bust a two step.

Across the two days of the carnival held in the Royal Borough of Kensington and Chelsea, there were 313 compared to 454 arrests last year.


With that said, we must put the statistic of carnival into context and reality. The organizers of Carnival and the police work very hard to ensure the event is as safe as possible. However, for the carnival to be 100% crime free it would mean London and society would need to be 100% crime free. That is simply not going to happen. London has a problem with knife crime and acid attacks. The carnival takes place in London. So London’s problem becomes the Carnival’s problems for two days. Moreover, there will always be the potential for minor conflict when humans find themselves in mass in the same location and there is alcohol flowing uninterrupted.

Every Saturday people get drunk and have fights. Every Saturday time some football fan gets into an argument with another fan and there is an exchange of punches. For instance, the video below is two Nottingham Forest Fans supposedly fighting over the last pie at the food counter.

Alcohol + People = Potential Conflicts. However, the majority of people manage to avoid succumbing to this equation. Therefore, we should focus on highlighting the good rather than pushing a negative agenda for clicks, retweets and views.

The future of Notting Hill Carnival is dependent on people supporting, promoting and fighting for it and not assuming that it has a guaranteed place in the British calendar.

‘We cannot carry on like this. It is a disgrace,’ he said. ‘My brave colleagues were attacked for just doing their job.

‘This is not acceptable. What other event would be allowed to carry on regardless with so many police colleagues under attack?’

No one should be attacking the police working at Notting Hill Carnival. Just as no one at football games, nightclubs or other festivals should be attacking the police. Thus, it is not fair to penalise and generalise carnival by a minuscule amount of criminality. The same criminality that is present at other events, at a higher degree. If the police want to make London safer, it begins with building a better community relation. That community relation breaks down by calling for the end of Carnival.

I will end with this post Carnival statement from Emma Dent Coad MP: 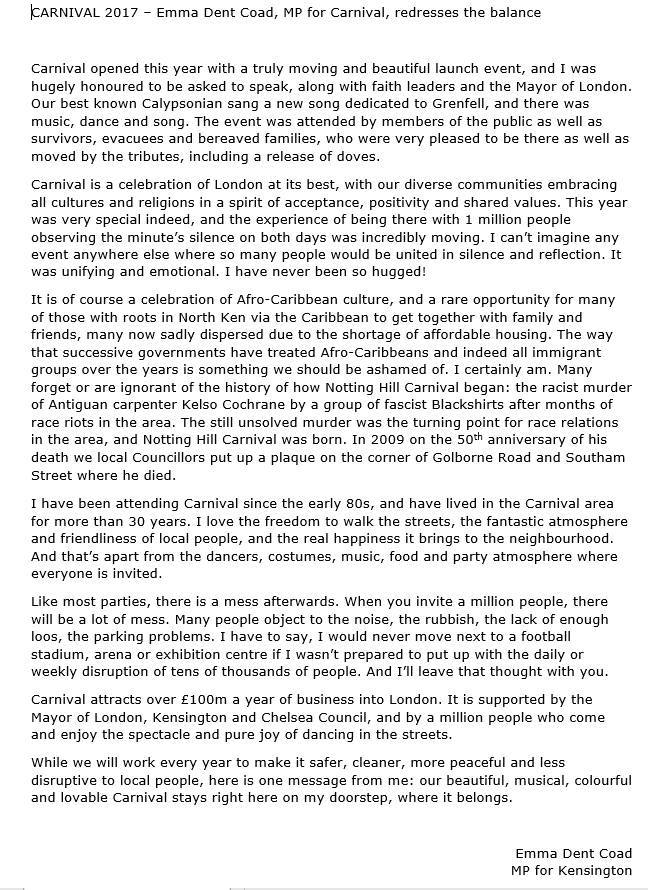 By
Antoine Allen
You can tweet me at @AntoineSpeakson – It would be nice to receive some feedback: good or bad I will survive either way 😉