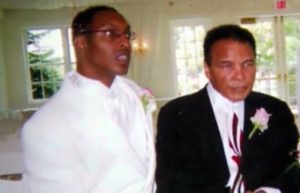 Muhammad Ali Jr. legendary boxer Muhammad Ali, was reportedly detained for several hours by immigration officials at a Fort Lauderdale-Hollywood International Airport. After Muhammad Ali died I wrote an article about how a young Ali in today’s world would be treated. More and more it seems like I was correct.

It has been reported that:

According to a report by the Courier-Journal, Ali and his mother Khalilah Camacho-Ali were arriving at the airport from a Black History Month event in Jamaica on Feb. 7 when they were pulled aside by customs and asked if they were Muslim.

Ali’s lawyer Chris Mancini told the Courier-Journal that while Camacho-Ali was let go, her son was questioned for almost two hours about his origin, where he was born and his religion.

Ali is a Muslim born in Philadelphia and holds a U.S. passport.

“To the Ali family, it’s crystal clear that this is directly linked to Mr. Trump’s efforts to ban Muslims from the United States,” Mancini said, referring to President Donald Trump‘s executive order banning citizens from seven Muslim-majority countries from entering the U.S.

The order was put on hold by a federal judge on Feb. 3.

Camacho-Ali and Ali Jr. live 20 minutes from the airport in Florida. According to the report, the family contacted a lawyer the day after the incident. 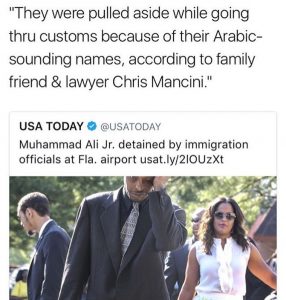 This incident is just another reminder of the negative impact of Donald Trump’s presidency and the ramifications of ‘war on terror’ started by Republican President George Bush Jr. In short, marginalising people is not a way to foster unity and common understanding. stereotyping and spreading fear is what drives people underground and validates the negativity feelings and beliefs.

Obama said in his speech that Muslims are our sports heroes. What sport is he talking about, and who? Is Obama profiling?

The question becomes how many people who weren’t the children of famous people has this ban and profiling affected.

The order imposed a 90-day ban on travellers from:

Additionally, it suspended the US refugee programme for 120 days and indefinitely halts acceptance of refugees from Syria.

The ban did not apply to certain visa types, nor to religious minorities fleeing religious persecution from those countries – for example, Christians.

Syria is the only one of these countries specifically named in Mr Trump’s order. The others derive from a 2015 Obama-era statute listing “countries of concern” for terrorism to be excluded from the US’s Visa Waiver Program.

I will end this how I end my piece on Muhammad Ali’s death and life.

‘So to truly mourn and honour Muhammad Ali a person must speak out against Islamaphobia, racism, inequality and be empathetic of the deaths of people around the globe.

RIP Muhammad Ali; legends never die; they live on in the memory of those whom remember all that they stood for.’

By
Antoine Allen
You can tweet me at @AntoineSpeaksOn if you want to carry on the discussion or simply comment below.

Let us know your thoughts
What is your favorite Ali Quote?
How will you remember Ali?
Do you think celebrities should speak about topical issues?
Please comment below and challenge someone to think a little deeper

If you liked this check out our other articles, such as: 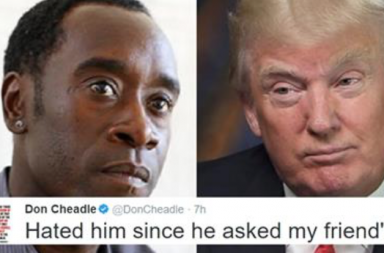 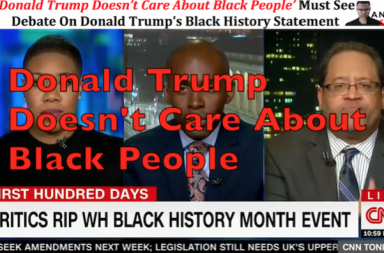