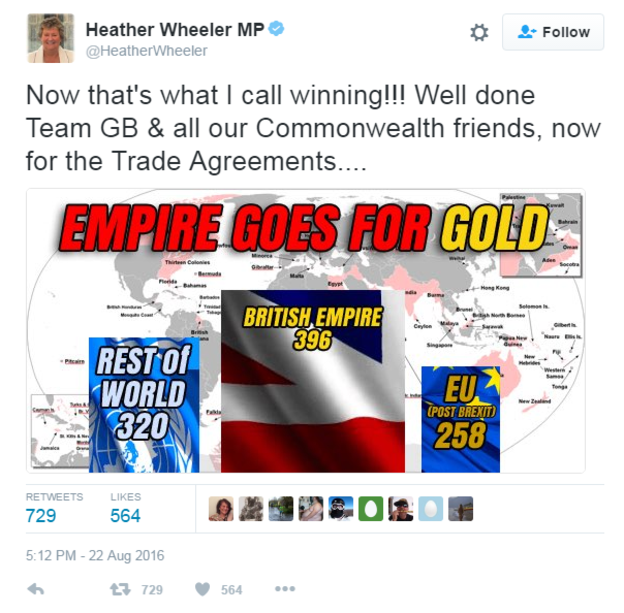 MP Wheeler said the tweet was a joke response to a similar tweet that had all the EU medals together. The problem is Heather Wheeler is an MP not a comedian. Many people didn’t find her ‘joke’ response at all funny.

Labour MP David Lammy has called for MP Wheeler to apologise for the tweet that many people on social media found deeply offensive. To many, it seemed like the tweet insinuated that Britain still owned or could claim the achievements of the many nations who fought for independence from the sometimes brutal rule under the British empire. Twitter users posted pictures of that brutality.

Ms Wheeler, who campaigned for Britain to leave the European Union, told the BBC it was a “tongue-in-cheek reply” which she felt was clear, adding: “My tweet says congratulations to Team GB and the Commonwealth”.

When queried about the mention of the British Empire, she said: “It was clearly a joke.”

Conservative MEP Daniel Hannan, who also campaigned for Brexit, tweeted in support of Ms Wheeler, saying: “This is Twitter! Any light-hearted remark will spark cretinous faux-outrage!”

“This is Twitter” is such a poor excuse. No twitter is a platform for people to be able to speak their mind. However, it isn’t a special place that people can say whatever they like without expecting any form of backlash or scrutiny. Heather Wheeler is an elected representative of the British People. Her words carry weight and important for that very reason. This is regardless of what platform she uses to speak to the general public.

If you have forgotten Britain’s history; here is a video on Britain’s role in the transatlantic slave trade

Do you think this tweet was in bad taste?
Do you think the conservative MP should apologise for the offence she caused?
Or Do you think we take twitter and social media too seriously?
Please comment below and share; challenge someone to think a little deeper