Ashley Theophane is a name that the casual boxing fan might not be familiar with. In fact, you’re probably more familiar with his modelling work for Ted Baker or for WellMan vitamins, than his in-ring exploits. Hopefully, by April 2nd, this will have changed.

British light-welterweight Ashley ‘Treasure’ Theophane, who hails from Paddington, London, faces off against the brash, outspoken and polarising figure that is Adrien Broner for the WBA world title in Washington DC, on April 1st.

Whilst a British boxer getting a title shot is nothing new (Britain currently has numerous world champions), Theophane’s story is different to what you might be used to. Theophane’s achievements in the ring are largely unheralded on these shores. Maybe because he’s done things his own way – on the road, without the push of a TV network or UK promoter and on his terms.

A pro since 2003, with a record of 39-6-1 (11 KO’s), is proof that his ride to boxing’s summit has been anything but a smooth one. The man who fights out of the Mayweather Boxing Club in Las Vegas, Nevada, is backed by ‘TBE’ himself, Floyd Mayweather Jnr. Impressed by Ashley’s hard working attitude when training at his gym, he took a chance where no promotional banner would. 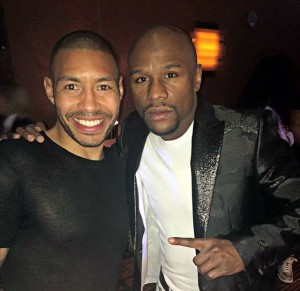 ‘Treasure’, had been going to the Mayweather Boxing Club for two years now before being signed to Mayweather Promotions. After training in New York, he thought he would visit Las Vegas to see what it was like to work in the same gym as Floyd ‘Money’ Mayweather, regarded at the time as the sport’s best pound for pound fighter.

It would be easy to understand why Theophane would have been intimidated showing up at the Mayweather gym all those years ago. The reality was, he showed up like he belonged there and was quickly able to fit in with the rest of the team and has since formed a close bond with fellow ‘TMT’ fighters Ishe Smith and Badou Jack.

Theophane has been a tough luck fighter throughout his career. He has experienced highs and lows on the way to landing a shot a world honours. After an impressive win over DeMarcus Corley in 2008, he lost a split decision to future world champion Danny Garcia in Texas in 2010. A decision, which many felt went the wrong way. A couple of fights later he beat the talented Delvin Rodriguez, again stateside, but was unable to build on that impressive win. 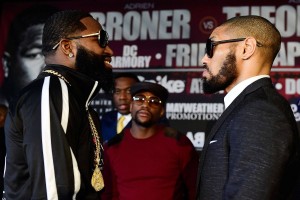 Theophane didn’t rest on his laurels, however. He continued to put in the work and returned to England and quickly won the British light welterweight title with a notable KO of Jason Cook at Wembley Arena. This high did not last long though, as he dropped a unanimous decision, and with it the Londsdale belt, to relative novice Darren Hamilton in 2012 in Liverpool.

That was Theophane’s last fight in the UK. Feeling frustrated at a lack of appreciation for his talents, he has fought on the road in America and once in Luxenbourg. Since aligning himself with boxing’s biggest name, he has lost only once (a split decision to world title challenger Pablo Cesar Cano), and is currently riding high on a 6 fight unbeaten streak.

Now, at 35 years old, Ashley faces his biggest challenge. Adrien Broner (31-2-0, 23 KO’s) is already a 4-weight world champion, and has promised to ‘torture’ Theophane and win within 4 rounds. But Theophane is not intimidated by his younger foe. “He likes to call me ‘easy money,’ ” Theophane said at the press conference to announce the fight, turning to Broner, “but I can tell you it’s going to be hard money, boy.”

If successful, this would surely go down as one of Britain’s biggest success stories in a boxing ring. In April, across the pond, in front of a hostile crowd, in front of Floyd Mayweather, the man he calls boss, across the ring from a man who calls himself ‘The Problem’, Ashley Theophane is looking to prove once and for all, that you can achieve your dreams, if you are prepared to work for it.

Win, lose or draw, the UK should be proud of Ashley Theophane.

Like what you have read? Check out @MrChrisJessop take on Khan Vs Canelo: Khan he or Khan’t He?

Comment below and let us know your thoughts on this Boxer and British boxing in general.
Do you think this is an exciting time for British boxing?
Who do you think will be the next superstar?
Who are you most exciting to see fight?

Here are some words from the Ashley Theophane himself. FYI someone in Ashley’s camp need to get a highlight reel together; we couldn’t find one anywhere on youtube!