Maybe I should say thank you and farewell since this is the LAST movie Hugh Jackman will do playing Wolverine and yes that is OFFICIAL! But maybe we might still see him in a Deadpool movie? ( one can only hope )

”LOGAN” –  What a fantastic experience- this film is what the cinema was made for! I am a big fan of superhero movies and I read comic books but most importantly I’m a big fan of movies in general. So for me seeing great acting is always more important than seeing big set pieces and huge explosions and expensive CGI all over the screen (yes I’m looking at you Michael Bay). Take for example ”PRISONERS” where Hugh Jackman played a very difficult and different role than your favorite X-men superhero Wolverine. He was a desperate father in that movie filled up with anger, fear and desperation; due to the situation he was put in, he made some really bad choices but you still rooted for him in the movie because of the way he played the role. Well I can tell you now Logan is one of his Best performances yet; not just playing Wolverine but in general as an actor. He is great,  he is Awesome, he is in pain, he is suffering, he is old and Damaged … he is ” Old Man Logan’. So if you are a big fan of Jackman as an actor and of the way Wolverine was portrayed by him in the movies, then you will LOVE this movie mostly because he is still and gladly so, the main character of the movie.

Before we go further you need to understand if you are not familiar with the comic book ”Old Man Logan”, on what this movie is based on even with all the changes it made to the book), this movie is not you summer BLOCKBUSTER movie. It is not the Avengers it is not even your X-men movie …it is how the title ( LOGAN ) says a wolverine movie. You won’t find any of the old mutants ( except for Dr.Xavier ) in the movie and it will be explained in the movie why… You probably won’t like the reason why but such is life, BAD THINGS HAPPEN and this movie tries to be as grounded into reality as possible even if it’s a movie about superheroes.

The story is set in the future, maybe in an alternate universe or maybe not. It’s hard to tell because the movie isn’t telling us if this is the same Wolverine that traveled in time in ”Days of future Past” or if this is the Wolverine from the first X-men movie or simply another Wolverine in a completely different universe … It is a future where mutants do not exist anymore and I won’t spoil it for you why a future where the Government has won the war against mutants and the last remaining mutants ( if any ) are hiding because they are being killed when captured no questions asked. There is a new generation of mutants but unlike the old ones, they are being cloned from DNA of the best mutants that lived and trained as some sort of soldiers… I think because of the plan or whatever plan or reason there was for all of this is soon scraped and they ( the bad guys ) decide to kill them anyway …Well, that sucks, doesn’t it? … So yes there are moments like this in the movie that can frustrate you because you don’t know, understand why we got to this point, why humans are doing what they do and how the mutants lost the war with humans more exactly … After a slow start of the movie where you see an almost DEAD Dr. Xavier that suffers from a degenerative brain disease ( Alzheimer ? ) and dementia and a battered sick Logan that tries to work as a driver saving some money for him and Xavier to be able to leave the US because Dr. Xavier is or was considered the most dangerous Weapon of Mass Destruction ( yes he is spoken as he is a weapon and not a person ) . We are then introduced to some circumstances to the new star of the movie X23 and if you’re not familiar with the X-men comic books again, X23 is basically part of the new generation of mutants ( sort of like DC’s Teen Titans ) but their existence is part of the story and it’s explained how she got here and what her purpose is. From here on we get some really good action scenes and the most BLOOD GORY fights and deaths we have ever seen in a movie ( thank you Deadpool for making this happen ). Yes, this is the most R-Rated gory superhero movie to date. Do not I repeat DO NOT take your small children if you don’t want them to see clear adamantium claws ripping trough someone’s skull, his face or trough his neck with blood splatter all over…it’s gruesome and brutal I LOVED IT. There are about 3 maybe 4 set pieces where Logan has to fight against these Mercs ( yes they are just some random mercs hired to track down mutants ) and a surprise villain x24 who I won’t spoil it to you who he is …but he is a bad mean son of a bitch. Trough it’s slow moments the movie tries and succeeds in creating and bonding these last remaining characters together Dr. Xavier, Logan and X23 ( the young girl). There is character development here especially between Logan and the girl and Logan and Xavier ( not that we needed more of that). We knew Logan cares for Dr. Xavier and vice-versa but here we actually see a ”father-son relationship” and it’s heartbreaking at times… 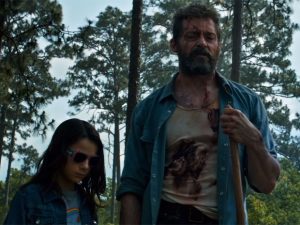 The acting in this movie is pretty much PHENOMENAL regarding the main actors including the young girl X23 and with Hugh Jackman leading by far ( Oscar worthy ). However … and it pains me to say this the villains of the movie are undeveloped and weak because of no character development and no previous introduction … They are just bad guys because they are

The acting in this movie is pretty much PHENOMENAL regarding the main actors including the young girl X23 and with Hugh Jackman leading by far ( Oscar worthy ). However … and it pains me to say this the villains of the movie are undeveloped and weak because of no character development and no previous introduction … They are just bad guys because they are mercs/soldiers because they are paid to ?… And thew lack of other mutants does hurt the movie a bit. It feels like Logan should have been a story made out of 2 or 3 movies ( sort of like Logan / Logan’s redemption / Old Man Logan ) … It’s like we jump so far away into the future skipping so many events ( probably explained in future movies maybe ) and we get to where we are and BAM this is what is happening just like that. So other than the main trio of the movie everyone else gets a PASS they do their job but no time to really appreciate anyone else.

while it’s not your huge blockbuster movie with huge set pieces it does very well whatever it does … And that is RAW brutality and well-choreographed fight and probably the best CGI blood effects to date. So good actually that I can not say what was actually practical effects ( fake blood ) and what was CGI . It was simply shivering and you get to feel the impact of each blow/shot/cut in the movie. I think in terms of Wolverine slicing and killing people this is the closest we can get to perfection. 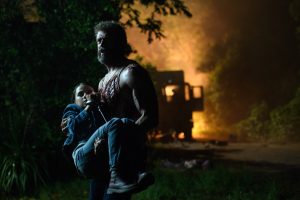 I like that fact that there was no shaky cam and when the fights pick a high tempo it’s well filmed from wide shots and you get to understand what the hell is going on on the screen ( which is more then I can ask for with all these new action movies coming out ). I liked the art direction also especially during the scenes filmed in the desert areas and the tone of the movie overall. It’s not perfect but it’s good.

I really enjoyed some of the songs used, they are not bombastic and won’t get your blood boiling but they are well chosen for what the movie’s message aims to be. During the fight sequences,  you also have some really creepy sounds going on that compliment those specific scenes. It’s different it’s sad and it’s brutal and weird at times.

well what else can I say about the movie without repeating myself. This is a different superhero movie, it’s not an X-men movie and it does not aim to be one. It’s certainly not a ”Wolverine Origins” movie and it is not Deadpool type of movie either. It is a sad and raw realistically made movie; so sad that it might even bother you at times, due to the lack of humour in it and the lack of any comedic relief.  However, it does have its funny moments few and far in between but when they happen they will probably make you laugh ( because you desperately needed them so much ). It’s something else to finally hear Dr. Xavier say ”Oh fuck of Logan” :)) … So listen if you are a fan of Wolverine in the X-men movies and or a fan of Hugh Jackman or a fan of good acting in movies in general, do yourself a favour and go see LOGAN. It will make your skin goosebumps at times it will shock you and maybe even make you cry. I personally think there were things that could have been changed like the final battle scene, the way it played out and the way the movie ends but it’s still a POWERFUL and WORTHY goodbye to one of my favourites superheroes of all time The Wolverine