Lawrence Okolie, a name that boxing, sports and fitness fans should get to know. His remarkable story of turning his physical health around is symbolic of the power of sport, dedication, self-belief and personal ambition.

As you will learn from the interview, Lawrence has only been boxing for since 2010. He did not start boxing with the goal of becoming an Olympian or European champion. He simply wanted to lose some weight and improve his fitness. However, destiny and a series of ups and downs got him into the GB squad. After just over a year in the squad, he qualified for the Rio 2016, Olympics. He has already made a name for himself as European Boxing Champion and sparring with professionals like Dillion Whyte and Anthony Joshua[ Heavyweight Champion ]. 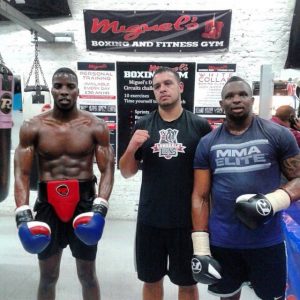 In Rio, Lawrence joined sporting legends from around the world and a record-breaking GB Olympic team. He was victorious in his first Olympic bout but was beaten on points by the eventual Bronze medalists Erislandy Savón. Lawrence gave an inspirational performance considering that Erislandy Savón had previously won a Silver Medal at 2012 London Olympic in the super heavyweight category. Whereas, Lawrence was fighting in his first Olympics in the under 91kg category.

In this series of interviews, Lawrence tells us about how he got into boxing, what drives him, his hopes for the future and the hurdles he had to overcome to become an Olympic boxer.

How did Lawrence get into boxing? What were those first feelings of being in a ring like?


What was your life before boxing? Did you get into fights growing up?

How did you get into the GB Squad? What hurdles did you face getting into the boxing at 18(which is fairly old for an amateur?

What inspirational words do you have for people trying to change their lives around?

Well done to Lawrence Okolie for representing himself, his community and Great Britain in the ring and as an inspirational young man.

Let us know your thoughts
Did you watch any of Lawrence’s fights?
Do enjoy watching boxing?
What other sporting stories have you found inspirational?
Please like and share; challenge someone to think a litter deeper