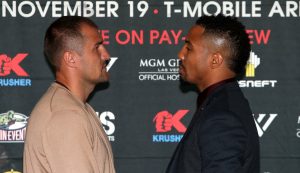 Christmas comes earlier this weekend and all eyes will firmly be on Las Vegas, Nevada.

Though it has been a frustrating year for boxing fans due to over-hyped mismatches, extortionate pay-per-view prices for seemingly non-events, injuries scrapping potential big fights, failed drug tests, laughable comebacks and…Tyson Fury. However, this year’s penultimate month gives fans a reason to be cheerful and boxing a chance to catch its breath, make it through the round and fight on against UFC seemingly unstoppable body blows led by the likes of MMA stars like Connor McGregor.

This Saturday sees the ‘Krusher’ Sergey Kovalev defending his three light-heavyweight titles – the IBF, WBA and WBO – and possibly the title of ‘P4P’ king against unbeaten American Andre ‘Son of God’ Ward.

There seems to be a frustration in boxing as too often the world’s best fighters are kept apart for one reason or another and what we want and what we get, are two completely different things. Most discussions about super fights lead us to talk about a time decades ago, when the best would pit themselves against the best on a regular basis. This fight now seems like an exception to the rule and that’s what makes it even more special.

There is a real throwback feel to this fight – two undefeated warriors vying to solidify their spot as the world’s best fighter and win here does just that.

Kovalev, who hails from Kopeysk, Russia, has had to wait for a fight of this magnitude after failed negotiations with the WBC champion Adonis Stevenson. Despite being world champion for over 3 years, the 33 year-old has struggled to find a competitive rival that people could get excited about and one which would add to his legacy. Ward may tick all of the boxes.

The biggest win of Kovalev’s career thus far, was a lopsided victory over the legendary Bernard Hopkins. Despite being 49 years-old, the wily and experienced Hopkins, entered the ring fancied by many, however Kovalev did what he had to do and dominated the fight from start to finish. The closest rival the Russian powerhouse has had is Jean Pascal. Now, whilst this made for an entertaining clash of personalities, Pascal was unable to seriously challenge Kovalev.

In the first bout, Pascal had his moments, landing some decent shots in some of the middle rounds. However, for the most part, Kovalev was too strong and stopped the challenger in the 8th round. The rematch, a year later, was a far less competitive fight and the build-up was dominated by racism claims and bad blood. Experienced coach Freddie Roach pulled out Pascal after the seventh round. Kovalev stated after the fight he could have finished it earlier, but purposely drew it out to punish his Haitian foe.

Kovalev’s last defence was against the tricky and awkward South African, Isaac Chilemba and despite showing some vulnerabilities, he came out a clear winner.

Ex-Olympic Gold medallist Andre Ward’s road to this weekend’s mega-fight has been a lot different to his Russian counterpart. Originally a super middleweight, Ward proved his world-class credentials by winning the Super Six tournament, beating the likes of Mikkael Kessler, Arthur Abraham and England’s Carl Froch. So dominant was Ward at the weight, that there were no challenges left at the weight for him.

Since then, his career has been frustratingly stagnant. After a unanimous points victory over Edwin Rodriguez, serious injuries and promotional disputes have meant that Ward has been in out and of the ring only sparingly, fighting only 3 times between 2012 and 2015. However, this will be his third bout this year, hopefully putting those out of ring issues behind him.

Since moving up to light heavyweight, Ward’s opposition hasn’t been spectacular, but the manner in which Ward defeated the previously undefeated Sullivan Barrerra, was impressive and points to Ward being just as good now as he was at super middleweight. In his last outing, the Californian easily beat Alexander Brand and whilst it was a routine victory, it showcased that he has fully established himself as a force at light heavyweight.

This is easily the best fight of the year and it is rare for such a brilliant match-up to happen with little fuss and no real drama between the fighters. It is a shame that due to both fighters limited fan bases, the fight is almost going under the radar.

Kovalev is obviously the bigger and stronger man, having always campaigned at light heavyweight. However, due to having 26 KO’s in 30 wins, he gets wrongfully tarnished as just a big hitter. He is actually a very smart and skilled fighter. Kovalev’s main strengths lie with his excellent jab and his unrelenting work rate. He pressures his opponents for every minute of every round. Add to that, he has immense power in both hands and is one of the most clinical finishers in world boxing.

On the flipside, Ward relies on the fact that he is one of the most intellectual fighters on the planet. He is a thinker, is usually able to nullify his opponent’s strengths and can seemingly adapt to any style of fighter. Whilst he doesn’t possess the power that his Russian opponent does, he has proven multiple times that he can fight the distance and has a brilliant defence.

Similar to Floyd Mayweather, he doesn’t have knock out power, but he is incredibly accurate and picks his punches very well. He is slippery and slick and will rely on his skill set as he will be tested like never before.

What is there not to love about this fight? It is for 3 of the 4 world titles, for pound-for-pound excellence, somebody has to lose their undefeated record and it if it is a good match, it has immense rematch value – there could be a 2nd and 3rd contest. Also, it once again pits Russia against America. Now, whilst this may still represent the current political unease between the two nations, I like to think of Rocky IV and Ivan Drago vs Rocky Balboa! 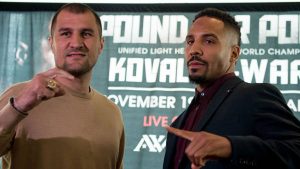 In an era where real, genuine super fights are hard to come by, both boxers deserve immense credit for taking this fight. It is a clash of styles and it could go either way. Whilst this is true in any fight, picking a winner for this one is virtually impossible. Both fighters are on top of their game, both undefeated and both in their prime. Will Ward’s skill set shine through, or will Kovalev ‘Krush’ another opponent?

If I had a gun to my head, I would pick Kovelev on points. I think his size and power will give Ward problems that he has never encountered before. Ward also hasn’t faced a top opponent in a long, long time and this inactivity at the top could give Kovalev a slight advantage. That being said; don’t be surprised to see the complete opposite happening!

One thing is for certain; only one fighter’s hand will be raised at the T-Mobile Arena and that man will end the year sitting atop boxing’s fabled ‘pound-for-pound’ list.