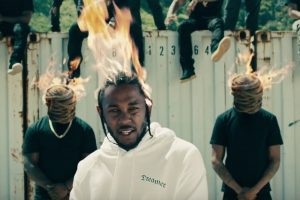 Kendrick Lamar released his new single ‘Humble’, which looks like a taste of what is to come from his eagerly awaited new album. Whereas, some people loved it; others found it ‘benevolently’ misogynistic and another example of a man trying to put his beauty standards on to women.

However, to me, a person’s perception of the video is based on Plato’s allegory of the cave. The fact that most people reading this will not know what Plato was sayings, proves my point. In short, our level of prior knowledge on a topic, impacts our analysis and enjoyment of someone else talking about said topic. In this case, if someone who knows more than us about feminism, the depiction of women in the media, patriarchy and the multifaceted nature of misogyny, provides a criticism of something we thought was ‘woke’- we often label them as ‘haters’ because we are still in the cave and not willing to see their critique as knowledge. Yet, we and they must understand that knowledge and truth are two different things. There are no universal truths only perceptions/opinions. Thus, we can learn from each other perceptions in the knowledge that none of us deliver our messages perfectly; as we are all fallible to our own perception and preferences in life.
Kendrick raps from his perspective about his preferences- he is not Jesus. The video humble symbolize that. Therefore, as keyboard music critics we must also be humble in our analysis and our interactions with each other.


Most of the backlash has been provoked by this verse

So… I’m thinking about @kendricklamar‘s new video for #Humble & the casting call where they said. “Naw, sis. Not enough stretchmarks.” pic.twitter.com/kXPKxWfQ40

Kendrick told women on the last day of women’s history month that we are beautiful without the extra shit & y’all still mad 😭 how?

How dare Kendrick Lamar tell women he finds them beautiful in their most natural state!

One of my favorite parts in #Humble video pic.twitter.com/EC8k7XDT8U

My thought is that it’s reality for a lot of women, but it is a women’s right to choose how she wants to look and not a man’s place to say

I want black women to be acknowledged and appreciated for our intellect and our accomplishments not just our face, hair and asses. https://t.co/uCPLbp9XtT

Yet this same person wrote this. Which is a good point but at the same time, it shows their own lack of awareness or a point that is personal to how they see the world. For instance, it was the police who released the recent photos of missing Black women. Many of them have been found and there has allegedly been no reported increase in missing cases of anyone black, white, male or female, in comparison to recent years. Thus ‘no one is doing anything’ could be analysed as an incorrect statement. However, just as Kendrick gave his perspective/opinion, so did this twitter user.

Tens of thousands black women missing/dead in the u.s and no one is doing anything about it. But, we still talking bout what we look like?

In short, Kendrick Lamar is a prime example that the path to enlightened consciousness[ woke as some of you say] is filled with good intentions- but no one person can deliver a universal message that is also true to themselves. We each hold preferences and how we expressing them can be indicative of our current level of ignorance; regardless of how good our intentions are. As a society and especially social media we must start to understand our criticism must be framed in a way to educate people, not simply for retweets, likes and the applause of the followers in our echo chambers of knowledge, opinion and too often self-righteousness.  We must admit there are those who know more than us about a given subject; but, we must also acknowledge that there are those that know less than us but that does not mean their opinion is invalid or ‘hate’. Most poignantly we must realize just because we ‘like’ ‘love’ or think someone is ‘the truth’ we do not have to defend them like loyal dogs- we must be objective in our analysis of those we praised the most. This is so that they can keep improving their abilities and refining their message.

So, is Kendrick still my savior of Hip Hop? Hell Yes! Hip Hop has never been perfect, just as Kendrick Lamar is not perfect. Hip Hop is an art form and Kendrick reflects the Black male consciousness that still has a lot to learn about misogyny, patriarchy, feminism and how to truly attempt to praise sister. But, Hip Hop is opinionated and to censor that opinion only limits artistic expression. Therefore, it is our job to be here to critique and evaluate the messengers!

By Antoine Allen
What are your thoughts?

Check out our review of J Cole