Katie Hopkins 'sacked' By LBC But She Will Be Back! | Here's Why And Are Her Worst Tweets

Controversial broadcaster and social media personality Katie Hopkins has left radio station, LBC by mutual agreement. However, many people believe she was sacked due to her controversial tweeting and libel cases against her.

Hopkins’s has often been accused of making inflammatory, racist, Islamaphobic and dangerous statements. Most recently she called for a ‘final solution’ when referring to how to stop Islamic extremism. However, even with employees at LBC supposedly celebrating, I predict this will not be the last we see or hear of Katie Hopkins.

LBC and Katie Hopkins have agreed that Katie will leave LBC effective immediately.

Earlier this year, food writer Jack Monroe won £24,000 damages, plus £107,000 in legal costs, in a libel action against Hopkins after a row over two tweets, which Monroe said caused said caused “serious harm” to her reputation.

Hopkins was later told she could not appeal against the libel action.

In December, she apologised to a Muslim family she accused of being extremists after they were refused entry to the US for a Disneyland trip.

Mail Online, which published her claim, also paid £150,000 in libel damages to the Mahmood family.

Like her or hate her Katie Hopkins still has a large following. Therefore, it is very unlikely this is the end of her career. Anyone that follows American politics will know Katie Hopkins is essential the British version of Anne Coulter. Both of them gain success by pushing the ‘freedom of speech’ boundaries as far as possible by making inflammatory comments about minorities, immigrations, and Islam, within the knowledge that it will appeal to their right wing audience and supporters.

Anyone that follows American politics will know Katie Hopkins is essentially the British version of Anne Coulter. Both of them gained their collective success by pushing the ‘freedom of speech’ boundaries as far as possible by making inflammatory comments about minorities, immigrations, and Islam, within the knowledge that it will appeal to their right wing audience and supporters. They act as the counter argument or narrative to the liberal commentators and ‘Politically correct’ narrative of most broadcasters.

As such a polarising figure, Katie is able to be the topic of conversation for her supporters and for her detractors. Therefore, in the ‘social media engagement’ world we live in now, she will still be top billing for any broadcaster that simply wants views, clicks, and shares. Whether we like to admit it or not, there are many people who share Katie Hopkin’s views.

No one amasses over 700k Twitter followers by accident. Any person with such a following is offering opinions that many of their audience shares, resonates with or would happily state themselves if they had a similar size platform.

Therefore, the statement ‘no press is bad press’ is even more true for public figures like Katie Hopkins. Her notoriety is not dependent on people liking her. She simply needs to stay relevant. There will be a new topic for her to discuss on a new show eventually. This is why she will be back!

Celebrities STOP replying to @KTHopkins she is like Obi-Wan; Each time you strike her down she becomes more powerful than you can imagine

However, with that said, Katie’s ‘sacking’ is a reminder that freedom of speech does not mean the freedom from consequences of what you say.

Here are some of Katie’s most inflammatory tweets and statements 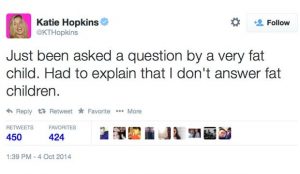 With that said, LBC is host to a number of opinionated hosts and presenters. However, Leading Britain’s Conversation doesn’t actually represent everyone from Britain. There is not a single Black presenter on the LBC schedule. Therefore, it will be interesting to see whom they hire to take Katie Hopkin’s time slot. 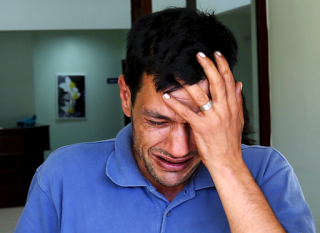 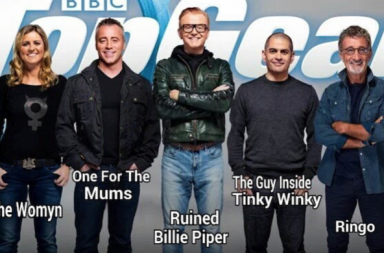 Top Gear’s New Line Up! Here’s How The Internet Reacted…