When people talk about the crime during Notting Hill Carnival, it seems like they are really commenting, generalizing and judging Black people and our culture.

Here’s the audio version for those who would rather listen and watch. Or you can scroll down and carry on reading.


The media would have people believe Carnival was ‘The Purge”; two days of non-stop violence and debauchery. Whilst making out that criminality is only unique to Carnival and does not take place at other popular events.

It seems like the discussions on the increase in crime at the Notting Hill Carnival have been founded upon a passive aggressive racism that stereotypes and generalises Black people and our culture as “violent destructive, nihilistic gangster”.

Since 1964, Notting Hill Carnival has been the two-day celebration and expression of Caribbean and Black culture. As I have said in a previous article, the Carnival’s roots came from the desires for unity, celebration and strengthening Caribbean people and culture in Britain. This was after local race riots and the murder of Kelso Cochrane. However, with each year, the historical inspiration and cultural relevance of Carnival becomes a little less. Especially, when the media focuses their attention and headlines on the increasing crime-related arrests and incidents; rather than the 99.99% of people enjoying themselves and going home unharmed.

One of the leading voices of this exaggeration has been Katie Hopkins. Hopkins decided to pander to her supporters and question whether Carnival should continue. She said:

Michael replied: “This is a London event, it’s multicultural – ” and that’s what really kicked Katie off.
“I don’t buy multiculturalism at all.”

Turns out their ‘we’ didn’t try very hard to find comparable statistics. Derek Richards rebutted Hopkin’s claims and others by saying this on Facebook:

So racism and the lobby of gentrifying insurgents wouldn’t have anything to do with this anomaly would it?’ 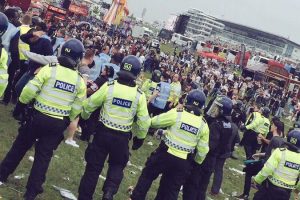 This whole discussion smacks of the Black on Black Crime discussion that does not mention White on White crime. Everything Black people get stereotyped for White people and every other race also does. More poignantly, it should be acknowledged that the vast majority of all of those people will not participate in any forms of negative activities.

Carnival is no different to the rest of society. Most people who attend do not cause any trouble. There is a whole host of influential factors that impact crime at Notting Hill Carnival and in the wider community/society. Factors such as: heighten policing, underfunded education, poverty gap, lack of funding for youth centres, lack of job opportunities and many other reasons.

This current insidious discussion of Black people and Carnival’s crime statistics reminded me of David Starkey’s comments after the 2011 London Riots:

“The whites have become black. A particular sort of violent destructive, nihilistic gangster culture has become the fashion and black and white boys and girls operate in this language together… This language which is wholly false, which is this Jamaican patois that has been intruded in England and that is why so many of us have this sense of literally of a foreign country.”

Starkey must hold a completely inaccurate depiction of the Britain he speaks of. In Starkey’s Britain, before Caribbean people arrived here everyone supposedly lived in a utopian Britain without crime. A Britain where working class people all spoke like his Cambridge and Etonian friends. However, when Black people arrived here with their reggae music, gyrating hips, and chocolate skin, they subsequently, corrupted Britain’s youth and destroyed ‘Britishness’. Starkey’s Britain ignores the fact that Caribbean people helped to rebuild Britain’s public services after World War 2. We have subsequently played a continued part in working for the interest of the British people. As a result, through multiculturalism, Britain has developed into a diverse, tolerate and before Brexit, what seemed like a welcoming society.

With that said, this summer saw the most glaring example of the racial hypocrisy in the media’s and Starkey’s discussion on race, riots and crime. What David Starkey did not acknowledge is that football hooliganism was an exclusively Caucasian pass time for much of his lifetime and even to current day.

The 2016 Euros showed speaking ‘Jamaican patois’ and Black culture could not be blamed for the horrendous acts of criminality seen in France. ESPN reported that there had been 1000 arrests. A figure, that is more than twice the number at Notting Hill Carnival. Even without those stats, most people could see the stark difference in violence and hooliganism between football fans, when compared to the dancing of the majority of Carnival attendees.

Moreover, Black people are neither significant attendees of racing days. However, the riot police were still called into Epsom Racing Day where bottle throwing and fighting erupted between people not of Jamaican or African decent. Therefore, it turns out being Black is not a prerequisite for ‘violent destructive, nihilistic gangster culture’.

Just as being a White football or racing day fan does not mean you are predisposed to throw a punch or bottle at a stranger. Just as being Muslim does not mean you are a terrorist. Yet, it is people of colour who seem to be the only ones who get stereotyped so heavily, by the actions of the minority of them, that happen to tick the same box as them on the census form.

If we are going generalize and demonise a whole culture and set of people; the media should do it accurately for everyone. However, it would be better if they and society simply acknowledged that a minority of people will always act inappropriately at big events. Especially a free and open one like Notting Hill Carnival.

I would love to know the statistics for Carnival attendees because it seems each year the demographic of whom attend seems to be changing. (see my article on Carnival Gentrification).

Most people would attest that there is a significant difference in the driving force for public disorder between people protesting police brutality and people fighting for the sake of a football game.

Yet, no matter who attends or how statistics are shown, Carnival violence will always be associated with Black culture. That association went from the original Trinidad culture to Caribbean culture to Black culture in general. But it is this generality that ends up stereotyping us all as one people who think and act the same. Making us seem like a plague of Black Ants whom swarm Notting Hill for 2 days and then scurry back to the ghettos we came from.

Sorry, this simply is not the case. The majority of Black people who attend do not cause any trouble or engage in criminality. Just like the majority of people of all ethnicities that attend, simply embrace the carnival spirit and want to have a good time. 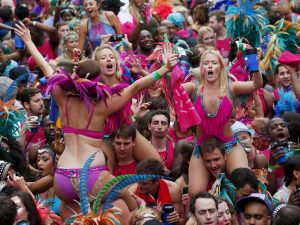 With that said, there is no excuse for the violence, stabbings, assaults, thefts or any other violent offenses that have taken place this year. We should denounce such behavior at all events. However, the question at Carnival is, is this a problem with Carnival, Black people or simply London Culture?

Leeds carnival is not known for such trouble. Nor is Canada’s Caribana or Rio’s carnival.

I say ‘London Culture’: Far too many London youths carry blades and weapons. However, 90 arrests meant 90 people no longer have their blades. Hopefully after prosecution will think twice about doing it again. That’s a good thing!

Moreover, despite some of their complaints, it seems like the Met Police force are using Carnival as two-day event to make significant inroads into London’s knife crime problem, in such a short space of time. 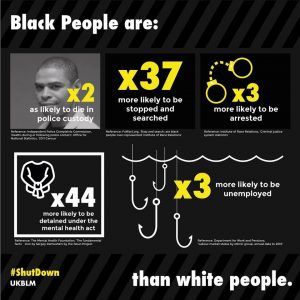 
Yet, if the police used their Section 60 order powers to police festivals like Glastonbury, then they would find significant Class A Drug use. Probably, enough to film a Scarface remake and a couple of seasons of Narcos. However, they do not. Therefore, festivals like Glastonbury cannot be used as a fair comparison to the most policed event of the calendar year. Even though, technically the crime rate is higher at Glastonbury despite nowhere near the level of policing.

Yet, this disparity in policing practices can be found further afield than Carnival’s two days of celebrations. From Britain to America there is significantly more policing of Black communities than White. Even though in America it has been proven that the rate of drug use from both communities is the same. However, because the Black Community is policed more, Black people get arrested more which greatly impacts our perception in statistics.

However, the point here is not to judge an event or a people by 0.022% of the attendees and population. Carnival is not and was not a ‘battlefield’. Black people and Jamaican culture specifically is not ‘violent destructive, nihilistic gangster’ in nature. We must not lose sight of the fact that riots, violence, and public disorder take place around the world by all ethnicities of people. The trigger for this can be political, sporting, reactionary and protesting. The flames of public disorder can be fuelled by alcohol, mob mentality, youth and a whole host of other reasons. None of them are specific to one race.

I would love a Notting Hill Carnival where there was 0% crime. However, each Saturday night around Britain the basic foundations of Carnivals result in the same equations.

With 2 million people attending carnival over a two day period, it is ridiculous to expect there not to be any public disorder. Especially in a city that does have some problems that need working on.

Let us not let the actions of a small minority ruin it for the vast majority.

FYI Here’s one of the pioneers of carnival: RIP SAM KING

Do you think Carnival is unfairly judged?
Did you go to Carnival and see any trouble?
Please comment below and share; challenge someone to think a little deeper