How Many Spots Can You Count? It Is Like 2015 #TheDress

Struggling to see the spots all at the same time? Don’t worry you haven’t been hit by one of GGG punches. This is an optical illusion posted by Japanese psychology professor Akiyoshi Kitaoka. 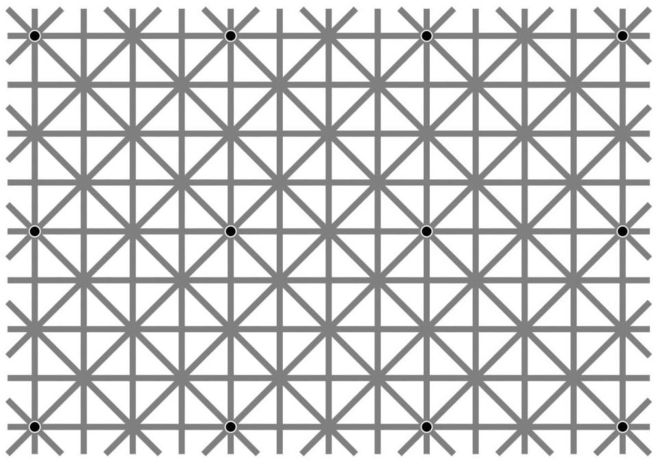 It started to trend on social media after game developer Will Kerslake tweeted the image on Sunday, by giving away the answers: “There are twelve black dots at the intersections in this image. Your brain won’t let you see them all at once.”

Well, theBBC reported that it is ‘Called Ninio’s Extinction Illusion after the French scientist Jacques Ninio, the image shows a grid of horizontal, vertical and diagonal lines with 12 black dots at various intersections. Most people will be unable to see all 12 at the same time.

Most people will be unable to see all 12 at the same time.

It is when the eye sees for instance, a particularly arranged pattern that the brain may not be able to process accurately.

Ninio explains: “When the white disks in a scintillating grid are reduced in size, and outlined in black, they tend to disappear. One sees only a few of them at a time, in clusters which move erratically on the page.

“Where they are not seen, the grey alleys seem to be continuous, generating grey crossings that are not actually present.

“Some black sparkling can be seen at those crossings where no disk is seen. The illusion also works in reverse contrast.”‘

Social media loves to have those brief moments when our shared humanity manifests itself in what we can or can not do with our eyes. For instance, this illusion seems reminiscent of #TheDress that went viral last year. The answer to that still alludes me. So, here is The Guardian explaining why we all saw the dress as differently. 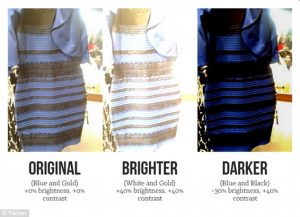 “What’s happening with #TheDress is that your eye is either discounting the blue so you’re seeing white and gold, or discounting the gold so your eye sees blue and black. But why would your eyes lie to you like this?

Human beings evolved to see in daylight, but daylight changes the colour of everything we see. Human eyes try to compensate for the chromatic bias of daylight colour.

We see objects because light is reflected. When we look at something, light enters the eye with different wavelengths which correspond to different colours. This light hits the retina in the back of the eye where pigments shoot signals to the part of the brain that processes these signals into an image.

Your brain figures out what colour light is bouncing off the object your eyes are looking at by subtracting that colour from the real colour of the object.”

Both of these optical illusions give a brief example of just how complex our minds are. They make a person wonder, if we can be tricked by simple lines or a two-tone dress; what other illusions are passing or not passing by our eyes on a daily basis. Are we really in the matrix?

Let us know your thoughts
How many spots can you see?
Which colour did you first see the dress as?

By
Antoine Allen
@AntoineSpeakson
Feel free to tweet me your answers