How Do Boxers Win Fights: Solitary Fitness Vs Team Spirit? 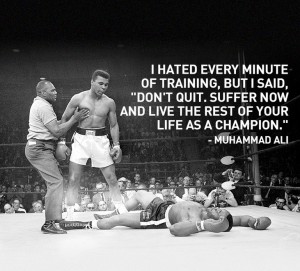 As soon as the bell rings for a fight a boxer is both alone and a part of a team. His vision, hearing and concentration are focused on his opponent. He is temporally deafened to the orders, screams and chants of his team and fans.

Why? Because only he can fight his opponent, only he can score that knockout or be knocked out. However, it is the collective efforts of his team that culminate to get him to the point of hearing that bell ring. Moreover, it is the preparation, advice, and motivation that will guide and care for the boxer; in those short moments between that bell ringing for rounds or the longer moments a bell rings between fights. The question is how does a boxer find that balance between I and Team.

The other day, I had a conversation with a boxer friend of mine. He told me how his training was going – where he’s training, who he’s sparring with etc. – and he told why he thought the gym he was going to in Manchester was ‘good’. He said of the fighters, that their energy was ‘different’ as they are trained and conditioned hard by their very well respected trainer. He said that the trainer gets them down the running track at 6:00 in the morning! And together they do all sorts of sprint variations; whilst Joe really puts them through their paces.

This is brilliant because one: their trainer is barking at them to work harder than they think they can and two: they are all training together, so the competition between them will be strong. They will want to prove to their coach that they are braver, tougher and fitter the rest of the team.

The benefits I’ve listed will always stand a fighter in good stead; it’s really important for fighters to be super fit because they’d never be able to fight hard if they weren’t. ‘Fatigue makes cowards of all men’ springs to mind, and if you’ve ever fought competitively you will know exactly what I mean – boxing is very, very hard.

Boxing though, is a very lonely sport. Fighters need to be physically fit, but they also need a certain type of metal when they are all alone, in the middle of a hard round, late on in a fight. When you’re in trouble half way through a round, you’re still a minute and a half away from your team. This can be paralysing.

I believe that fighters should make plenty of time for solitary conditioning and running, in the early hours of the day, when no-one else is pushing them, when no-one else is awake, to push themselves to their limits, to exhaustion. Building the discipline to do this for some people can be hard, because they’ve become accustomed to their trainer taking control of this; these fighters will have no accountability. These are the fighters that leave their trainers every time they lose, quickly getting a new one to pin the blame on for the next loss. They’ve missed a trick though, responsibility is empowering! and this will grow the more they become self-disciplined.

When fighters take control of their own conditioning and push themselves in training they are going to find it so much easier to do the same on fight night. When you’re in the ring, you’re on your own, but that loneliness will be a familiar feeling for the man (or woman) who bathes in it regularly.

There is no replacement for a very strong bond between a fighter and his coach, and this needs to be built in training; but trainers should also be there to slow their fighters down, hold them back from pushing themselves too hard and to get them to peak performance on fight night by doing so. They can be equally useful as the opposite of great motivators if their fighters are self-motivated.

One example is Pacquiao. When he was preparing for Barrera in 2003 – a fight he was tipped to lose – his trainer Freddie Roach said that he struggled to get Pacquiao to take a day off – he was running 6-7 miles on Sunday! In the gym he would have gradually reduced the amount of work he let Pacquiao do and this would’ve made Pacquiao angry as he would WANT to work (instead of being told to) and then Freddie let him off the leash on fight night ‘work all you want now Pacquiao’. He won a tremendous fight that night against one of the best pound for pound boxers in the world at that time. 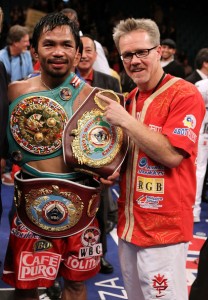 It’s my strong belief that fighters should make plenty of time to be on their own, to learn about themselves and to build an impenetrable will to win for when every other person in the arena wants them to lose.

If you liked this article check out our other boxing posts