Hertha Berlin lost their game against Schalke. However, they won the battle for tolerance, equality and the hope for ‘an open-minded world’ by taking a knee before their game in a show of solidarity with the NFL player protesters. This has been seen as one of the first examples of international sports people actively showing support for the NFL protest movement.

Hertha BSC stands for tolerance and responsibility! For a tolerant Berlin and an open-minded world, now and forevermore! #TakeAKnee #hahohe pic.twitter.com/spZvRSGVxQ

Before their Bundesliga game against Schalke FC, Hertha Berlin decided they would show solidarity with the NFL protests started by Colin Kaepernick.

“We are living in the 21st century, not the 18th century, but there are some people who haven’t developed their ideologies accordingly,” Hertha player Sebastian Langkamp told Sky Sports.

“If we can give them a bit of help in doing so, then that’s good.”

Kaepernick started his protest last year when he sat down as the American national anthem was played during a pre-season American football game in 2016. Colin Kaepernick

I am not going to stand up to show pride in a flag for a country that oppresses black people and people of color. To me, this is bigger than football and it would be selfish on my part to look the other way. There are bodies in the street and people getting paid leave and getting away with murder.
— Colin Kaepernick, former San Francisco 49ers quarterback, Aug. 26, 2016

However, since leaving the San Francisco 49s Kaepernick has been unable to find a new team to play for. This has led some commentators to state that Colin Kaepernick had been blackballed by NFL. This has resulted in more players following Kaepernick’s example and taking a knee during the national anthem.

However, most people have forgotten who told Colin Kaepernick to kneel instead of sitting, here’s the full story

Yet, it was the intervention of President Trump that took the protest to a new level. Trump called the players that protested during the national anthem ‘son’s of bitches’. This resulted in league-wide protests that included owners joining their players, in defiance against Trump’s statements that the owners should fire any player that protests during the anthem. Trump has since on his opposition to taking the knee:

Shannon Sharpe, a former NFL player turned sports commentator, has been one of the leading voices in critiquing the NFL protest and reactions:


The question is should more sports people join in the protests? Or does ‘taking a knee’ meanless when it is not during the American national anthem.

Let us know your thoughts?
Do you think more teams should join in the protest?
www.Facebook.com/antoinespeakson 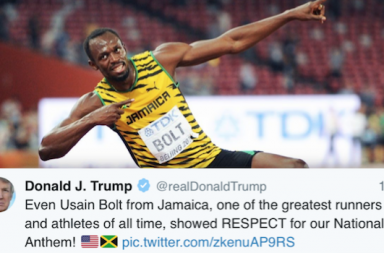