Today Stephen Lawrence would have been 42 years old. However, Stephen was the victim of a racially motivated murdered on April 22nd, 1993. Shamefully, it would be nearly 19 years until his parents saw some form of justice for his murder. For many, Stephen Lawrence’s name will forever live on as testimony to how racially and systemically different life in Britain was for Black and White parents and people. 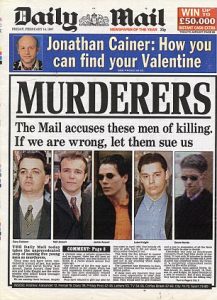 Stephen Lawrence’s murder became symbolic of the stark difference in life in Britain between White and Black people. For many White people, at the time, Stephen’s death may have just been another ‘bad’ news story. However, to most if not all Black Britons, Stephen’s death was our death, his parent’s tears our parent’s tears and the justice they fought for, was for their son and our sons and daughters!

Yes, many white people would have been saddened by his death. But there is a difference between acknowledging something was wrong and emphasizing because you know “Stephen Lawrence could have been my son”.

Stephen Lawrence’s death exposed the two biggest fears and warnings Black parents gave their children. Firstly, the fear of them being victims of a racially motivated attack. Secondly, having to confront an institutionally racist police force with years of confrontational community relations in order to try and try again to obtain the same justice and treatment afforded to everyone else.

As early as, May 4, 1993, the Lawrence family knew and complained that the police were not doing enough to catch Stephen’s murderers. By June 29, 1993 charges against two of the 5 killers had been dropped. In 1994 the Lawrence family felt they had to start their own private investigation and prosecution. By April 25, 1996, the case against the remain 3 suspected killers had collapsed and they were acquitted. In 1997, the inquest into Stephen’s death ends with the jury confirming Stephen was murdered unlawfully by 5 White youths.

However, the Lawrence family did not see justice until 2012 when Gary Dobson and David Norris were convicted of murder. This lengthy process, struggle and lack of justice was the fear of Black parents across Britain.

My own mother would warn me “do not walk home alone” and “If the police ever stop you, call me and make sure you get their badge number!”. Advice, I would put into action on more than one occasion.

I can only wonder how many times my mother’s heart started to race and her mind filled with anxiety, as I came home late or did not answer my phone. Yet, even after the recent Crimewatch reconstruction, my mother rang me to speak about the continued lack of justice. 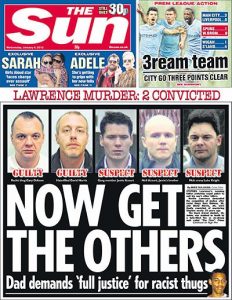 Why? Because, before and after Stephen’s murder, every Black parent shared the fear of their own child becoming the next Stephen Lawrence.

Sadly, Anthony Walker’s parent’s fears were realized in 2005. Anthony walker was brutally murdered in an unprovoked racist attack in Liverpool, with an ice axe by Michael Barton and Paul Taylor. Were Barton and Taylor emboldened by the lack of convictions against Stephen’s murderers? Or was Anthony’s murderers’ convictions due to the reforms to the police force, that was provoked by Stephen’s murder? We will never know. Sadly, all we know is Stephen’s parent’s pain was shared by the Walker family.

That is not to say that White parents did not or do not fear for the safety of their children. However, Stephen’s death was symbolic of attacks, murders and racist abuse that were an everyday reality for many members of the Black community. Therefore, fear manifests itself on different levels and for different reasons.

Having to deal with racist abuse can only be compounded by fearing you will have to seek justice from what was later proven to be a sometimes equally racist police force. What is truly sad is that if Stephen Lawrence had not had been murdered the 1997 Macpherson Inquiry may never have taken place. Thus, the modern day police force may never have publically stated in 1998, that they will eradicate racism in their institution.

Although, many will rightly say that sadly White people have also been victims of racially motivated attacks. But, the reason those names are not on the tip of people’s tongues is not down to society simply ‘not caring about white lives’ but because justice was served in most cases.

For instance,  in 2004, Kriss Donald, 15, from Scotland, was stabbed 13 times and set on fire. His brutal murder was committed by a Pakistani Gang, who were all given life sentences. After the trial, his mother said “Justice has been done. It is over.”

One of the reasons this murder stayed in my mind was because right-wing groups and leaders like Nick Griffin former BNP leader often tried to compare the two murders and use Kriss’s death for his own political agenda. He even used the comparison as a rebuttal to my first Guardian article on why society was still racist.

However, those that often use this comparison, miss the key reason Stephen Lawrence’s murder stayed in popular consciousness and the news. Stephen’s parents had to wait 19 years to see only some justice and even until this day, Stephen’s mother Doreen Lawrence cannot say ‘it’s over”. Only Gary Dobson and David Norris, 2 of the 5 suspected murderers have been convicted.

Therefore, Stephen Lawrence’s murder case is still ongoing and so are the revelations of the catalogue of errors. The police recently reviewed the case paperwork. During which, a grammatical error revealed a leather strap found at the scene was not 90metres away but actually 4.5metres from the murder scene.

Police are now offering £20,000 to anyone who can provide information that eventually leads to a successful prosecution.

This ‘mistake’ was compounded by the revelations that at the time of the investigation the police attempted a smear campaign against the Lawrence family. Along with revealing an undercover police officer worked within the Lawrence family camp. 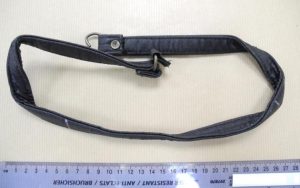 Both of these revelations made it seem like even when Black people are murdered they are still treated as suspects.

This is why Stephen Lawrence’s murder haunts the minds of Black parents. It was the realization of a fear they all held. It was the warning they gave their children. It was the belief that justice was something Black people had to fight for rather than unquestionable given like any other British Citizen.

The simple difference between #GrowingUpBritish and #GrowingUpBlackBritish was proven by Stephen’s murder. Two sets of parents lost children to racist attacks. But only one has been able to say “Justice has been done. It is Over”. The other had to fight for justice and reveal an institutionally racist police force. Did the majority of White children grow up being told or thinking I could be the next Kriss Donald? I think not.

Life in Britain has changed since the 90s. However, the distrust in the police is still apparent. Although some have questioned the methods of #BlackLivesMatterUK, the conversation they are provoking is still a much-needed one.

Happy Birthday Stephen, there is still work to be done; we will continue to fight on to prove you did not die in vain.

By
Antoine Allen
@AntoineSpeaker Tweet me to carry on the conversation
Let us know your thoughts
How did your parents react to Stephen Lawrence’s death?
Were you fearful of racist attacks in your town?
Please comment below and challenge someone to think a little deeper