“Who you gunna call? Ghostbusters and their street smart token Black friend” Should this be the tag line for the new All-Female reboot of the Ghostbusters movie franchise?

UPDATE: Ghostbusters have released a new trailer and it is equally as bad. Rather than give them some undeserved views. Here are some really funny and insightful reviews called Double toasted; check out what they had to say

For many movie fans Ghostbusters is seen as a classic. It had entertaining action, special effects that looked great at the time and not too bad today and an ensemble of funny actors such as Dan Aykroyd, Bill Murray, Harold Ramis and their black friend whom they secretly wished was Eddie Murphy.

Originally Dan Aykroyd wanted Eddie Murphy to play the role of Winston Zeddemore. However, Murphy was busy filming Beverly Hills Cop. So the studio settled for Ernie Hudson and subsequently downgraded his character and lines. So needless to say Hollywood operate a policy of ‘If we can’t get the most famous Black actor lets just get a less famous one and make him a token character’.

This is supported by the fact that original Winston was supposed to be the smartest and most capable Ghostbusters. Kind of like Carl Weathers[Predator] meets Carlton Banks[Fresh Prince]

‘In the original script for Ghostbusters, Winston Zeddemore was intended to be the smartest and most capable of the Ghostbusters, a former Marine with multiple degrees and a Ph.D., making him more suited for the job than the founding three Ghostbusters. However, in the final screenplay none of these qualifications were mentioned.’ Wikipedia

After Winston was given the role he barely appeared in the original’s trailer and his PHD was never mentioned. Also he was omitted from the promotional material for the subsequent video game.

But that was the 80s, surely poor diversity is no longer an issue?

Well, the original Ghostbusters film came out in 1984. Today is 2016, one would think that the Black Ghostbuster would be a more relevant, prominent and substantial member of the team. 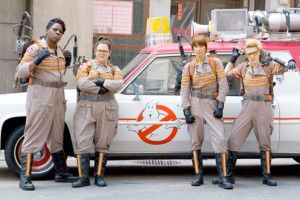 It would seem ‘not so much…’

As the trailer below shows, the Ghostbusters team is now comprised of 3 white scientists and their tag along ‘sassy and street smart’ Black friend played by Leslie Jones. Jones’s character is a subway driver instead of a scientist and seems like the personification of Hollywood behind the scenes diversity problem.

Having more Black writers and producers could potentially have made someone ask “hey, didn’t the Black Ghostbusters used to be a scientist? How comes our female version has her as a subway driver?”

Now, that is not to say there aren’t Black people whom drive trains or that is isn’t an honorable profession. The point here is context. The context of the Ghostbusters is a team of scientists taking on the paranormal. Context is previously they were all scientists; even if they downgraded Winston’s part. Question is why didn’t they make one of the White actresses the ‘sassy street smart’ Ghostbuster? Well, the director, Paul Fieg told Empire Magazine that:

We had written the role with Melissa[McCarthy] in mind, but then I thought I’ve seen Melissa play a brash, larger-than-life character. She’s done it in my movies before!” he said. He’s right, having directed the actress as big, brash characters in both Bridesmaids and The Heat. The Bridesmaids role earned McCarthy an Oscar nomination and made her a household name. Feig said he wanted to do the same thing for Jones. USA Today

So, if Jones, wasn’t going to originally be playing the role, would there have even been a Female Black Ghostbuster? It seems like someone in the production team plucked up the courage to say “Do you guys realize none of the Ghostbusters are white this time?”

With that said, Leslie Jones’s has spoken out in support of her character and her role. Which isn’t surprising. I am sure she has bills to pay like everyone else. I am also sure she was struggling to find other leading roles. Most likely, Jones had hoped that this franchise would continue on and on or lead more opportunities for to reach mainstream success. However, the problem isn’t simple the characterization it is the lack of diversity in movie’s in general for Black Actresses.

Hollywood could be excused for having the ‘sassy black friend’ if it was just seen as the ‘the sassy friend’. The character being black would not matter if there were more positive and leading roles for Black Actress. Jones’s character would be counterbalanced by another film where a black actress is portrayed as strong, ‘intelligent’ and a ‘positive’ lead. For instance, imagine if every depiction of White women was Melissa McCarthy or Rebel Wilson ie as ‘Brash, larger than life’.

Wilson and McCarthy’s characters aren’t seen as the stereotypes of White women because the majority of White female characters are the polar opposite of them both. Moreover, I wonder if Leslie Jones will ever be afforded the chance to play a different type of character by this Director or any other…

Do you think Leslie Jones’ character is a stereotype?

Are you looking forward to seeing this movie?