GGG vs Kell Brook: Can Brook Shock The World? Yes, But Two Things Must Happen

This is an unusual kind of fight, but something that is unfortunately happening more and more in the sport. The fight is a middleweight contest, meaning that Kell Brook will be stepping up not one, but two weight divisions to take on the most feared fighter in the division (if not the sport). Looking at this fight on the surface, you will see one undefeated champion stepping up to face another undefeated champion. However, the stats don’t really give a true reflection of the fight here.

Both are undefeated world champions with high KO percentages and the bout will take place at a soldout arena with the challenger fighting in front of a highly partisan home crowd, after a week of public events across the city of London. What is there not to love about this fight?

Well, one – nobody even thought about this match up before it was announced, so it is not a fight that anybody really wants to see. The boxing world would much rather GGG take on Canelo Alvarez, or failing that, another middleweight world champion. Many would have much preferred Chris Eubank Jr as the Briton in the opposing corner, before negotiations for that fight broke down. Secondly, nobody is really giving Kell Brook much of a chance. Sure, Kell Brook CAN win, but to do so, he would have to produce one of the best performances of all time (no pressure).

Gennady Gennaydyevich Golovkin, or GGG as he is more affectionately known, has firmly established himself as the most fearsome knockout artist in world boxing. He is arguably the #1 pound-for-pound fighter in the world right now. Golovkin, a quiet, well-spoken fighter hailing from Kazakhstan, has knocked out everyone put in his way since making his American debut and hasn’t heard the final bell since 2008.

The ‘middleweight Mike Tyson’ has built up a loyal following, with people tuning in knowing they are about to witness violence. The problem GGG is now facing is that due to his incredible knock-out ratio (it is currently the highest ever middleweight KO percentage); he is largely avoided by the big names and because of this, is yet to be truly tested. That is how we ended up with this fight – negotiations with other middleweight world champions fell through and Eubank Jr seemingly priced himself out of the fight and Kell Brook was presented with a once in a lifetime opportunity.

Sheffield’s Kell Brook, the IBF welterweight world champion, has also built up an impressive undefeated record with wins overly the likes of Carson Jones, Vyacheslav Senchenko and a career best win over Shawn Porter in California, USA in 2014. Much has been made about the fact that ‘Special K’ is moving up two weight classes; however, he has struggled to make the welterweight limit recently, and is a very thick set 147 lber. By his own admission, he is more natural at 160 lbs, so making the weight won’t be an issue – in fact, at the 30-day weigh-in, Brook weighed 11 lbs more than GGG. Brook, much like bitter rival Amir Khan, has been looking for a fight with a marquee name with some of the major welterweight players like Danny Garcia, Keith Thurman, Jesse Vargas and Khan himself, for years. And similar to Khan, who challenged GGG’s rival Canelo at middleweight, Brook has decided that stepping up in weight and taking on a man who many have avoided, provides him with his best opportunity of experiencing huge PPV fight. Whether you agree with fighters jumping up weights or are disappointed in GGG for fighting a welterweight, you have to give Kell Brook massive respect for taking on such a dangerous fight. 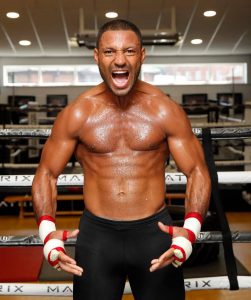 Brook is a talented boxer, who at welterweight is quick, strong and packs a powerful punch. However, the big question mark here is whether he can carry all of those attributes up to middleweight. Pictures of the new 160 lbs Brook seem to show him as a natural at the weight and if he can settle quickly, move around the ring well and get his jab working, he can cause GGG a lot of problems. Yes, Kell Brook can win. But for this to happen, he will need a career best performance and for Golovkin to underperform. Despite his reputation as a banger, GGG is an underrated boxer. He was a decorated amateur – world amateur champion, Olympic silver medallist and out of 350 amateur fights, he only lost 5 and he has never been knocked down. Add to this, he will have a size and a significant power advantage and it looks like it will lead to another GGG KO win.

All in all, the fans in attendance are in a win-win situation. They will either cheer their English hero to what will be one of the finest wins in boxing history, or they will be in awe at getting to see one of the finest boxers of our generation up close.