Get Out Is Making Some People Angry: Here's 5 Real Racist Incidents In History Worthy Of Anger

The thriller and horror genre has pretty much been drained of all originality. However, Get Out strikes out to bring a new twist to the genre; we are calling this ‘Racism Horror”. Get Out is about an interracial couple going to ‘meet the parents’ for the first time. However, the Black boyfriend is confronted with more than just some ‘Guess Who’s Coming To Dinner” level of racial tensions. He becomes trapped in a town that seemingly has a more sinister agenda towards young black men.  The film is directed by Jordan Peele from the Key and Peele show.

Get out has actually received a 100% rating on Rotten Tomatoes so far: Click here to read some of the reviews

With that said, there has been even more shock and social media outrage by a section of the white community and probably a minority of Black people who do not ‘get’ the trailer either. Namely, both of those whom are not or choose not to be aware of the history of racism in America. Yet, there are also some who are aware of the somewhat sensational point this horror film is making. Watch the trailer so you can gauge where their outrage or misunderstanding may have been born from.

As expected this line and the general premise of the film has produced complaints from some people. Some people have been shocked by the trailer and others have said it portrays the genuine fears that black people sometimes have.

But remember, the old adage, it’s ok to be quasi-racist as long as you have a member of the opposite race as a close friend. Jordan Peele is already Black, so he can’t say “my best friend is black”. On the other hand, Peele has more than a best friend whom is white, he is married to a White woman ie he has a super best friend. But, in all seriousness, it can be argued that the film portrays the fear that Peele subconsciously had when he first met his wife’s parents. Are those fears only limited to interracial couples? Are those fears valid or invalid? Probably not! If we look at history we can see how these fears may have manifested over time.


The question becomes, just how far from reality are the themes of this racially charged thriller? Well, here are some examples from history of the mistreatment Black people have faced by sections of the White community; all after the end of slavery. 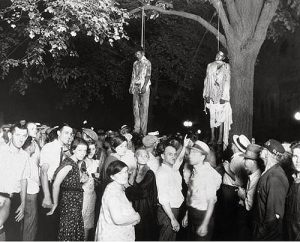 This was only a brief overview of the history of mistreatment, racism, rape, murder and subjugation that Black people have faced throughout history. Therefore, if you are angry at a fictional trailer, you should read a history book or do your own research on just how fictional the many incidents of racism Black people have faced. Those real life accounts of racism should compel people to be outraged, rather than a new twist on the fictional horror genre.

Or maybe people’s outrage is the subconscious knowledge that the film is only fiction but the themes it represents are very much reality from history and in contemporary society. Therefore, instead of being angry or questioning the film, people should be conversing with black people to ask why they hold these ‘nervous’ feelings and how society can help to combat them.

In short, movies like this expose the subconscious fears of the subjugated minority and highlight a lack of awareness from the other members of the same society. Get Out it is basically the horror version of Guess who’s coming to dinner. If people have a basic knowledge of history then they shouldn’t be shocked by this film. It only shows racism from a horror perspective. Therefore, if art is supposed to imitate life, this film is merely a reflection of an aspect of life. Thus, people should find society’s racism more shocking than this film that for the first time depicts an aspect of life from a horror perspective. So, yes it is sensational but that ‘Horror’; people need to discuss the issues it raises- rather than simply complaining for the sake of it.

FYI if they are mad about “Get Out” they probably won’t want to watch Birth Of A Nation: the true story of Nat Turner the leader of a Slave rebellion.


Let us know your thoughts
Did you like the trailer?
Will you be going to see the film?
Please comment below and share; challenge someone to think a little deeper

Please like our page to support independent news and opinion: www.facebook.com/AntoineSpeakson
On the page you can find interesting videos such as poems, comedy, speeches, movie trailers and quotes.

‘Get Out’ Star Daniel Kaluuya “I Resent That I Have To Prove I’m Black” | Reply To Samuel L. Jackson

Caster Semenya’s Gold Medal Vs Lynsey Sharp’s Tears: Who Should We Applaud Or Question? She, Yes SHE, Isn’t The Only Athlete With An ‘Advantage’

Rogue One: A Star Wars Story That Lives Up To Its Title! #FilmReview- Andre Speaks