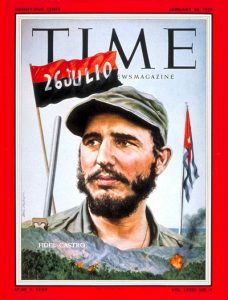 Fidel Castro, the Cuban revolutionary leader who became the embodiment of viva la revolution, for his achievement of his political, social and economic revolution. All whilst having to spend half a century defying U.S. efforts to topple him, has died at 90.

‘Castro’s younger brother Raúl, who assumed the presidency of Cuba in 2006 after Fidel suffered a near-fatal intestinal ailment, announced the revolutionary leader’s death on television on Friday night.

“With profound sadness I am appearing to inform our people and our friends across [Latin] America and the world that today, 25 November 2016, at 10.29pm, Fidel Castro, the commander in chief of the Cuban revolution, died,” he said.’
Fidel and Cuba’s David and Goliath struggle stood as testimony and inspiration to smaller nations around the world that had their sovereignty continually floated by American imperialist plans.


Fidel Castro, the man and the revolutionary.

A lawyer who became a Marxist guerrilla. Born in Biran, Cuba, into a wealthy farming family. After working as a lawyer for three years, he planned to stand for Parliament in 1952, but the Government was overthrown in a coup staged by General Fulgenco Batista. Castro accused the US-backed Batista of violating the constitution and led an attack on his Moncada Barracks in the Oriente province.

He was taken prisoner and jailed for 15-years, but was released in a general amnesty in 1955 before going into exile in Mexico and the US. 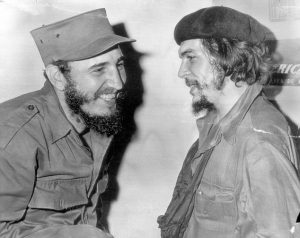 Castro returned to Cuba with just 12 men, including Argentinian-born revolutionary Ernesto “Che” Guevara, and fought a guerrilla war against Batista’s forces before eventually toppling him in 1959.

Within months he had embraced the former Soviet Union and fallen out with the US, seizing American-owned property and companies in Cuba.

Castro fought off a CIA-backed invasion at the Bay of Pigs in 1961. His alliance with Moscow helped trigger the Cuban Missile Crisis in 1962, a 13-day showdown with the US that brought the world closer to nuclear war.

Despite Castro’s growing legendary status the US had hoped father time would succeed where their assassination attempts had failed. Leaving their efforts to a “biological solution” to communism in the Caribbean. However, Castro’s brother Raúl succeeded him in 2008 and has solidified his own authority while overseeing cautious economic reforms, and agreeing the momentous deal to restore diplomatic relations between Cuba and the US in late 2014.

Remarkably Castrol managed to out last 10 Presidents and The Cold War that ended with dismantling his main supporter USSR. This is despite a suspected 600 attempts at assassination from America.

“I realised that my true destiny would be the war that I was going to have with the United States.” Fidel Castrol

We all are by-products of our culture, ideas, goals, dreams, effort and how the world reacts to them. Castro had a strong will in all of the above, therefore those 600 attempts at his life and the coinciding Cold War no doubt influenced his governance of Cuban. Whether that be restricting journalists or imprisoning opposition/unionist movements. Just as his religion most likely impacted his terrible treatment of LGBT community. Castro was not a perfect leader but nor are the so-called ‘First world’ leaders/countries.

This is not an excuse for Human rights abuses but simply context. A context that must be extended to all of countries. Whether it is France’s banning of Burkas, US waterboarding, treatment of Native America protestors, treatment of #BlackLivesMatter protestors, treatment of whistleblower Edward Snowden and USA/UK subsequent over use of surveillance powers. Each political leader must tackle with their own conscious when defending their political ideas, ethics and morality.

‘Men do not shape destiny, Destiny produces the man for the hour.’ 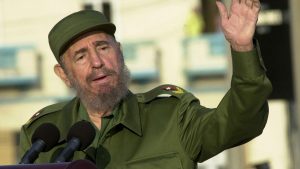 This is how world leaders reacted to Fidel Castro’s death:

“The name of this distinguished statesman is rightly considered the symbol of an era in modern world history,” the Russian president, Vladimir Putin

“From building a world-class health and education system, to Cuba’s record of international solidarity abroad, Castro’s achievements were many… For all his flaws, Castro’s support for Angola played a crucial role in bringing an end to apartheid in South Africa and he will be remembered both as an internationalist and a champion of social justice.” -Mr Corbyn, a long-time supporter of the Cuba Solidarity Campaign – which campaigns against the blockade on, and foreign intervention in, Cuba.

Jacob Zuma, the president of South Africa, thanked Castro for his help and support in the fight to overthrow apartheid.

“Fidel Castro was a towering figure of the 20th century. He incarnated the Cuban revolution, in both its hopes and subsequent disillusionments,” French President François Hollande.

“France, which condemned human rights abuses in Cuba, had equally challenged the US embargo on Cuba, and France was glad to see the two countries re-establish dialogue and open ties between themselves,” the Socialist party leader added in a statement.

Yet, if America had not had an embargo on Cuba, the country they left would be distinctly different. Despite that embargo, there are still many Cubans whom now have education, healthcare and society that has given them opportunities that may never have come even in America. Cuban is now world renowned for its health care, sporting achievements and music.

Cubans are left with a system that is imperfect but has a chance to move forward with ideals of socialism. Whilst they can look forward profiting from the tourism generated by Castro’s ‘brand’ of revolutionary spirit that Cuba will always be synonymous with.

Yet, Fidel is an example to the protesters and would-be revolutionaries around the world. He was able to topple a dictatorship and defend against the world’s biggest superpower. He proved that all attempts at change need a plan, significant strategy and unwavering dedication. Without those, there is no way to achieve tangible change. However, even if/when you do succeed you have to be ready to take on external forces and be flexible to accommodate the changing will of your own people. Or your legacy will be as split as Castro’s is.

Fidel Castro proved that even a small nation like Cuba can have a big and lasting impact on world politics and society. Like him, love him or loathe him his impact and place in history must be recognized and respected. There are few revolutionaries in history that have defied American military might and lived long enough to see their dream turn into a reality.

Here are some more famous quotes from Fidel Castrol:

Let us know your thoughts
What did you think of Fidel Castro?
What do you think the future holds for Cuba?
Please comment below and share to challenge someone to think a little deeper