Emmy’s is leading the way for nominating and awarding a diverse perspective of TV talent. In a Primetime Emmy awards night that could not include any Game Of Thrones Episodes, due to the series airing outside of the nomination period, it was still a very entertaining night. The 69th Primetime Emmy Awards, hosted by Stephen Colbert, aired Sunday on CBS.

In other historic Emmy wins, Julia Louis-Dreyfus getting the Outstanding Lead Actress In A Comedy trophy broke the record for most Emmy wins for a single role (previous record-holders were Don Knotts and Candice Bergen), and The Handmaid’s Tale’s win for Outstanding Drama was the first time that award has ever gone to a streaming service. 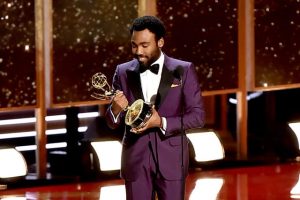 Donald Glover winner for Outstanding Director of a Comedy Series

The British winners included Riz Ahmed, who took best lead actor in a limited series or movie for The Night Of.

Here are all the winners:

Outstanding supporting actress in a limited series or movie

Outstanding supporting actor in a limited series or movie

Outstanding directing for a comedy series

Outstanding writing for a drama series

Outstanding writing for a comedy series

Outstanding directing for a drama series