Dr Dre received his Black celebrity wake up call after the rapper and producer was searched by police during an argument with another motorist over parking.

It has been reported by TMZ that Dr Dre got into an argument with another motorist after his drive way was blocked by their vehicle. TMZ say Dre pulled out his mobile phone to record what he says was ‘racist’ remarks coming from the other motorist. However, the Motorist subsequently called the police and said that someone had pulled a gun on him.

The TMZ the motorist said

“Here we go again. Another Black guy with a gun”

Pictures show that at least 5 L.A county officers arrived to the scene. They subsequently handcuffed Dr Dre and proceeded to pat him down for weapons. No weapon was found on his person. 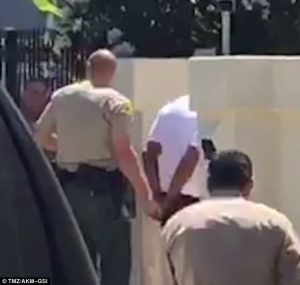 The reporter doesn’t suggest that the other driver was arrested for racially abusing Dr Dre. Maybe Dre stuck to the pointless ‘no snitching’ code in Hip Hop.

Dr Dre most likely thought his days of being stopped and frisked by the police were over, ever since he left N.W.A, became a multi-millionaire and  years later sold his Beats by Dre brand for a reported 3 Billion dollars to Apple. This incident shows that no matter your position in life a Black person can still be the prime suspect in too many people’s minds.

Some fact people should know on Black People and the police:

Some will say the difference between Dre getting searched and getting shot was due to him being cooperative. However, if we look at the recent shooting of Charles Kinsley we can see that being cooperative doesn’t stop you from getting shot. He was cooperative and his autistic client had a toy truck. Yet sheriffs still decided they would shoot first and ask questions later.

In this case the fact that Dre was outside his mansion and is a well knowledge celebrity was most likely the difference in his police encounter ending up being non fatal.

The most poignant part of this story is that Dre’s encounter with the police is being considered symbolic of a growing trend. There is an increasing number of comments and stories on the Internet of Black people believing that people are purposely calling in false reports to 911 of Black people pulling out guns in public.

If true these false reports may end in someone losing their life once again at the hands of the police. Many black people have been shot and killed by the police due to a false report followed up by an over zealous and badly trained officer. Names such as Tamir Rice, Charles Kinsley and John Crawford to name but a few.

Let us know your thoughts
Do you think Dr. Dre should have pressed charges against the other motorist?
Do you think Rappers should be doing more to speak out against police brutality?
Have you heard any stories of false police reports?
Please comment below and like and share; challenge someone to think a little deeper