Donald Trump has proclaimed “we have to start winning wars again” and that by increasing the military budget by a proposed $54 billion it will send a “message to the world in these dangerous times”. 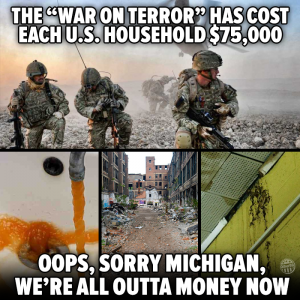 The United States already dwarfs the rest of the world in military spending — last year, the US spent $US622 billion, followed by China with $US191 billion, while the UK, India, Russia, and Saudi Arabia all spent about $US50 billion… The World Bank last year estimated how much various countries spent on defence as a percentage of GDP — USA 3.3 per cent, China 2 per cent, Russia 5 per cent, UK 1.9 per cent, South Korea 2.6 per cent, and Australia 2 per cent.’

Trump’s proposed increase is not unique or even as historic as he has proclaimed. However, it has come at a time when the previous administration was curtailing military spending. So what has happened in 2017 to make Trump’s administration need to increase the budget to such an extent?

Trump’s proposed defense budget is hardly one of the largest increases, was higher in FY09, FY08, FY03, FY02… #Jointsession pic.twitter.com/83wfcOFvEC

No doubt the 45th is referring to ISIS and not Russia’s blatant disregard for American people’s sovereignty when ‘hacking’ the American election. However, our biggest issue is Trump’s knowledge of American history. Trump has repeatedly stated that when he was younger all America used to do was win wars. Yet, Trump was born in 1946, therefore, he would have been ‘young’ during some of  America’s most iconic losses in wars.

In this video, we quickly look at a basic table of USA’s military results since Trump’s birth. Let’s see if Trump is factually correct about the history of his youth:


As I explain Trump’s revision of history is both inaccurate and dangerous. What exactly will be achieved with an extra $70 billion, unless Trump’s government intends to start another way in order to ‘keep the oil’.

Donald Trump has inherited a stable economy, it seems he willing to destabilise it on fear of a war that most likely won’t happen.

Imagine living in a world, where America decided it would spend less on war? Surely that would send a message to the world. A message of peace and acknowledgement that the people of the world deserve better books, health care and an improved quality of life rather than more guns, bombs and war.

What Do You See Shiny Legs or White Painted Legs? Here’s 15 Illusions That Will Blow Your Mind