Dennard and Sanders began going back and forth over whether Trump knew about black history or even if Douglass were still alive. Sanders believed that the clip was indicative of Donald Trump’s lack of care or knowledge about Black history and society. She added:

He is the clip:

A person would have to be a full-fledged on the payroll Trump supporter to not be able to acknowledge that both Trump and his Press Secretary Spicer spoke with very little clarity about Black History Month. However, history is history. if we attempt to look to the future, we have to acknowledge the statement made by Paris Dennard. He stated if he was to come back on to the show in a few months from now he would be able to state all that Trump is doing for the Black community. The question is, is he simply protecting the President he supports or does Trump actually have a plan to help the Black community?  As Sanders stated until we see actions and not just badly worded rhetoric people are justified to not hold a man with such a racist past with any level hopeful or wishful thinking. 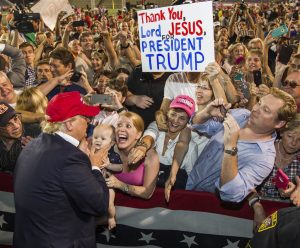 In the end, if Trump does ‘help’ the Black community it will be welcomed, by all regardless of their dislike for the New President. But it should also be acknowledged that help won’t be despite his detractors and protests levied against him, but because of them. The protests and critics are hopefully making Trump feel like he has to prove them wrong. We can only wait and see.

Let us know your thoughts
What do you think?
Should they lift the ban?
Should they keep the ban?
Please comment below and share; challenge someone to think a little deeper