Donald Trump’s handshakes are usually awkward but when he does not shake hands it is equally awkward. This awkward video of Donald Trump seemingly ignoring the German Chancellor, Angela Merkel’s offer of a handshake has been the talking point of social media. Yet, earlier in their meeting, the two shook hands on Merkel’s arrival. So this supposed refusal from Trump may not seem out of character but it at least felt out of protocol, seeing as he had already shaken Merkel’s hand. The Question is does it matter? Is this the best progressive media could come up with to take down Trump? Or are they pursuing a strategy that goes against their own core values?

The question of what goes through Donald Trump’s mind and his decision-making will be queried by political, social and psychological commentators for years to come. Maybe, this latest incident came from Trump being lost in translation, maybe he was daydreaming about being back on the apprentice or he is just the misogynistic manipulator we believe and paint him to be. But, my interest today does not lay in finding out that answer.

My interest is about, how this one awkward video has been used as propaganda against Trump. The handshake, or lack there of one, has become a news story by itself. Even though, Trump previously did shake Merkel’s hand. However, with the video circulating by itself, without the previous handshakes, a person would need to do further research to know that. Therefore, a person who did not do their own research about the meeting between the two political leaders, would be left thinking Trump did not shake Merkel’s hand at all. This shows how even the simplest bit of information can change the perspective someone has of a news story or a person.


‘Trump refuses to shake Merkel’s hand’– although basically making the same statement, it presents a different perspective to ‘After a ‘welcoming’ handshakes, Trump seemingly refuses another Handshake from Merkel’. The first headline makes it seems like Trump was ‘anti’ Merkel from the onset of the meeting. People would justly believe this, based on his previous statements about Merkel’s leadership of Germany and immigration. However, the second headline makes it seem like he was ‘happy’ to meet Merkel but during the meeting, something may have changed his mind about the German Chancellor.

Again, the handshake really is not the issue here. Trump has previously been lambasted for the nature of his handshake. Sometimes they are too long or sometimes Trump does his ridiculous ‘pulling in handshake’. No doubt, all of the many many videos critiquing his handshakes most likely have not gone unnoticed by the 45th. So, maybe Trump’s lack of handshake is indicative of a man feeling the burden of being scrutinised and simply not knowing how to act as himself or as President. Or simply said, he might not have heard the request in the first place. Now that again could be propagated into a headline that reads: ‘Trump has hearing problem’ or ‘Trump daydreams and misses handshake request’.  I am sure the right wing media would have happily spun this meeting if it was former President Obama. Yet, what do we or the progressive media gain from this constant and easy attacks on Trump?

Yes, Donald Trump is a despicable man. He symbolises everything wrong in society and just how easily the media and a person can manipulate the ignorance in society. However, it will be a long 4 years if we repeat how the right-wing media attacked Obama for 8 years. Long because at heart, or at least in principle ‘liberals‘ or those who call themselves progressive are not attack minded.  The progressive media try to be the ‘play nicely’ type of kids in the playground, trying to get everyone a touch of the ball during Football. Whereas, the conservative and far right media are the ‘it’s my ball no one can play unless I want them to’, the bullies and the arrogant yet, somehow popular kids; that the rest of us do not know why their followers do not see their holistically ‘evil’ personality. 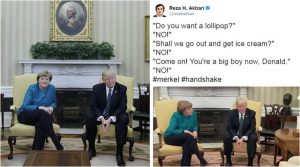 Therefore, I simply do not believe, the progressive media is equipped to go on an attack mode for 4 years. Yes, liberal comedians can carry on quiping Trump’s faux pas and ignorance but the actual media is known for the progressive higher ground. Whereas, a Fox News could attack Obama for 8 years straight, with no need to dial back or give a balanced discussion. Progressive media’s own morality and ethics are why ‘attack mode’ goes against their own core values. Fox news has no values, attack mode to them is the same as championing equality for progressives. Yet, that progressive morality means when Trump does something well, they will choose to praise him even if it is not in their ‘agenda’. For instance, Van Jones praised Trump during a speech. His praise came as a warning but it was praise nonetheless. Van said ‘the virus’ of Donald Trump was mutating.  Yet, his warning was how does the media and Democrats react to a less offensive version of Trump.

Obviously, praising Trump does not help the progressive cause or The Democrat party. It would result in Trump supporters stating ‘See I told you he wasn’t actually that bad’. So, progressive media and The Democrats need to find a better strategy to combat Trump, rather than just waiting for him to make horrendous mistakes or do something outrageous. He did some pretty outrageous things during the election campaign and yet he is now President… Maybe that tactic works well for him and is a losing strategy for the progressive media and The Democrats.

I am no political adviser. But, I believe the same solution that would have defeated Trump in 2016, can be used to defeat him in the run up to 2020. Progressive media and especially The Democrats need to find a champion, someone to praise, someone to build up to a point where society sees them as ‘presidential’. Before, 08 Barack Obama was promoted by Rappers like Nas as the person who should be president. Yes, Killer Mike loves Bernie Sanders but Bernie could not even beat Hillary. Why would Trump supporters who wanted less progressiveness and lower taxes vote for Sanders ie the anthesis of Trump? I still believe it is a false narrative to say Bernie would have beaten Trump.

I will end by quoting one of my favourite anime shows- Naruto. By the end of the storyline, the two main characters wanted to become Hokage; which is basically the leader of their village.  Sasuke- one of wannabe leaders simply thinks he can become Hokage by force. Whereas, his older brother Itachi, tells Naruto, another wannabe Hokage that:

Hillary Clinton lacked acknowledgement for her being ‘presidential’ material. Namely, because the media and The democrat focused on why Trump was wrong for the job, rather than, why Hillary was right for the Job. The progressive media and democrats need to not repeat this same mistake for 4 years. They need to find someone else to ‘acknowledge’ as the worth person to defeat Trump.

‘3Cs of Life; choice, chance and change- you must make the choice, to take the chance, if you want anything to ever change. ‘
Please like our page www.facebook.com/antoinespeakson