Caster Semenya’s Gold Medal Vs Lynsey Sharp’s Tears: Who Should We Applaud Or Question? She, Yes SHE, Isn’t The Only Athlete With An ‘Advantage’

At the elite level, where athletes train equally as hard and have comparable talent levels, the question becomes what is a fair or unfair natural advantage? Newly crowned Olympic Champion Caster Semenya has been scrutinised by this question more than any other athlete in modern times.

South African Caster Semenya is the 800m Olympic champion; congratulations to her. She ran 1min 55.28sec, the 20th fastest time of all time, making her the 11th fastest woman of all time. However, her performance has been overshadowed by the questions around her testosterone levels and highlighted in an interview by her fellow finalist.

Great Britain’s Lynsey Sharp came 6th in final. She ran a personal best 1min 57.69sec, making her the 3rd fastest GB athlete of all time. Her time is the 532nd fastest time of all time. The BBC decided to ask Sharp about her opinion of the winner Caster Semenya.

“I have tried to avoid the issue all year. You can see how emotional it all was. We know how each other feels. It is out of our control and how much we rely on people at the top sorting it out. The public can see how difficult it is with the change of rule but all we can do is give it our best… I was coming down the home straight, we were not far away and you can see how close it is. That is encouraging. We will work hard and aim to come back even stronger.”

Sharp insinuated that her fellow athletes Melissa Bishop of Canada and Poland’s Joanna Jozwik both shared her concerns. They all finished outside of the medals. The Guardian said the

‘three hugged together after the finish in what Sharp said was a show of unity. “We see each other week in, week out, so we know how each other feel.”’

Her time and her 6th place have meant many people on social media felt it was not her place to speak on the controversy surrounding gold medalist Caster Semenya. Some noted that this ‘unity’ seemed like the White athletes showing unity against the African medalists.

Lynsey Sharp: “The rule change makes it difficult to race against Caster??.”

Everyone: “But you finished 6th though” ?

With that said, as an athlete and fellow competitor surely she has the right to speak their mind? Just as other athletes have spoken about whether drug cheats should be allowed to compete again.

However, that doesn’t mean the public have to agree with what the athlete has to say, but we should listen to their concerns and form our own opinion.

Lynsey Sharp is a) directly affected & b) wrote a thesis on hyperandrogenism. She is perfectly placed to comment on Caster Semenya issue.

Yet, Sharp must be aware that her time and placing did not put her in the best position to be the prominent voice of descent. With or without Semenya, Sharp would not have medalled. No doubt her PB will continue to get lower and lower. But right now she isn’t even in the top 100 800m runners of all time. Just as Semenya would have been beaten in other eras. Many many other women from previous eras would have beaten Sharp. For some, Sharp simply wasn’t good enough to be talking about the champion.

Does Caster Semenya have an unfair genetic advantage?

It has to be said Caster Semenya is a woman not a man. But, she has a condition called hyperandrogenism. The Australian Telegraph reported Semenya has 3 times the normal level of testosterone and internal testes. However, these claims have never been validated. Thus, to an extent, they are now irrelevant. However, IAAF wants to make them relevant again by fighting the decision by the Court of Arbitration for Sport.

Based on the case of Dutee Chand, an Indian, 100m runner with the same condition as Caster Semenya. The Court of Arbitration for sport said there is no conclusive evidence to say her increased testosterone level helped her performance any more than, access to coaching and training facilities, nutrition and other biological and genetic variations.

The Court of Arbitration for Sport said it had been “unable to conclude that hyperandrogenic female athletes may benefit from such a significant performance advantage that it is necessary to exclude them from competing in the female category.”

FYI Dutee Chand was a 100m runner if it wasn’t for this case no one would have heard of her. Her hyperandrogenic condition didn’t help her win any medals or make it passed the heats of the 100m. Surely, if testosterone is going to help someone it would be in the 100ms? However, despite these findings, some athletes have still spoken out about the ruling and decision.

Paula Radcliffe, Former GB Athlete, retired world-record holder in the women’s marathon, told BBC Radio last month that it was “no longer sport” when a victory was so seemingly assured as Semenya’s appeared in Rio. 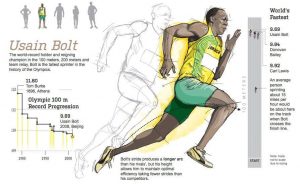 I guess Radcliffe had been temporarily retired from broadcasting during the last 2 Olympics’ 100/200m finals featuring the seemingly unbeatable Usain Bolt. Bolt is no just the fastest man in history over the two distances, but, also the tallest winner of both events. There is no doubt that Bolt’s longer stride gives a potential genetic advantage over his competitors. Bolt’s winning streak in 100, 200 & 4x100m relay over the past 3 Olympics, could be used to support this claim. However, Radcliffe hasn’t said anything negative about the nature of his performances.

Bolt isn’t the only person with a seemingly genetic advantage over his competitors. Kevin Durant 6’9(he says- he is more like 6’11), either way, he is far taller than the average man and even most basketball players. 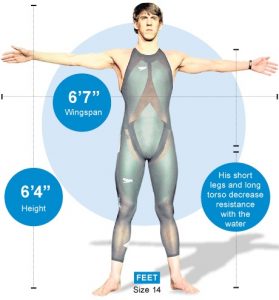 Just as many people have noted that Michael Phelps’ height, arm span and feet size have meant his is built to be the perfect swimmer. Kenya & Ethiopian athlete’s train and live at a high altitude, naturally enhancing their bodies ability to absorb oxygen. Actually, this last example can be heard in the joyful tone that commentators use when they see a ‘European’ athlete able to compete with the African athletes.

“Eero Mantyranta, a Finnish cross-country skier who won seven Olympic medals in the 1960s, including three gold medals, was found to have a genetic mutation that increased his hemoglobin level to about 50 percent higher than the average man’s.

There is “no fundamental difference” between a congenital disorder that produces high testosterone levels and a genetic mutation that produces elevated hemoglobin levels, according to a recent commentary, “The Olympic Games and Athletic Sex Assignment,” in The Journal of the American Medical Association.

Yet elevated levels of naturally occurring hemoglobin do not disqualify athletes. In any case, the Journal commentary said, “all of these biological differences are minuscule compared with the suspected use of performance-enhancing substances.””

In short, elite athletes are elite for a reason. They all have something that makes them faster, stronger and more physically predisposed to be more elite than their competitors and us normal folk. In my teens, I was ranked no1 in GB for 400m Hurdles. Partly, because I was the opposite of Michael Phelps, I had a short torso and long legs, perfect for hurdling. That didn’t mean I was unbeatable. It just means guys with shorter legs had to work on their technique and leg speed that little bit more.
Athletics is supposed to be natural athletes of all shapes, sizes and genetic variations taking on each other to see who is the best.

Of course, it should be women vs women, man vs man. However, men’s natural testosterone levels aren’t tested in the same manner as Semenya’s. There could quite easily be a male with a similar condition. If we are going to start restricting one athlete’s right to race and forcing them to take suppressant drugs; we would need to start restricting all athletes with comparable advantages.

If we are to mention Caster Semenya ‘invincibility’ As Paula Radcliffe insinuated and Lynsey Sharp cried about, then we must mention all the other athletes who have seemingly similar advantages.

If we keep it real, no one is going to beat either of Usain Bolt’s world records! Unless in the future, there is a 6’7 and super fast man, who decides not to become an NBA multi-millionaire. 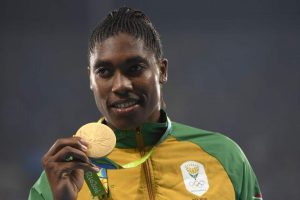 In 2009, Caster she was proud of herself and said:

“God made me the way I am, and I accept myself… I am who I am, and I’m proud of myself.” Caster Semenya

After the 2016 Rio Olympics she should be able to say it again, without the media or other athletes detracting from her achievement. However, there will always be questions around her performance whether she or we like it or not. This is what Caster Semenya had to say after her mandatory press conference post 800m final, after being asked “How she made a difference in the sport?”

“I think it is all about loving one another. It’s not about discriminating against people. It is not about looking at how people look, how they speak, how they run, it is not about being muscular. It is all about sport. When you walk out of your apartment you think about performing, you do not think about how your opponent looks. So I think the advice from me to everybody is just to go out there and have fun.” Caster Semenya

Let us know your thoughts
Do you think it is fair for athletes to question Caster Semenya?
Do you think the IAAF made the right decision on her condition?
Please comment below and share; challenge someone to think a little deeper

If you liked this post please check out our other sports and opinion posts: