After the circus act that was Mayweather vs McGregor resigned to ‘boxing’ history, after a long wait, it’s finally time for all eyes to be firmed focused on the mega-fight between Saul ‘Canelo’ Alvarez vs. Gennady ‘GGG’ Golovkin (the middle G stands for Gennadyevich) in Las Vegas on September 16th. 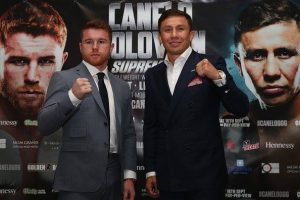 Canelo vs. GGG is for undisputed supremacy in the 160lb pound Middleweight division. The fight is for a number of organizational titles, including the WBA, WBC, IBF and IBO straps. Also on the line is the lineal middleweight crown which Canelo picked up from Miguel Cotto two years ago and has had ever since. Golovkin, however, is widely considered the true king at 160lbs. This fight is the chance to determine the true number 1 between two boxers at the height of their powers. There is nothing not to love about this fight.

Triple G (37-0, 33 KO’s) has to be the slight favourite leading into this fight. The man hailing from Karaganda, Kazakhstan has built up a reputation as one of, if not the, heaviest punchers in world boxing. With 33 of his 37 wins coming by the way of knockout, including 23 consecutive KO’s. However, an efficacious amateur career (widely reported to stand at 345-5), means that to dismiss his boxing ability and ring IQ is almost ludicrous.

The unbeaten 35-year-old strengths lie in his ability to walk down opponents and cut off the ring, before pinning them down and unleashing power punches from a host of awkward angles. Golovkin has a commanding jab, a superb variety of punches in his arsenal and if that wasn’t enough, he possesses an iron chin*.

This is not to say that Canelo (49-1-1, 34 KO’s) stands no chance in this mega-fight, but he will enter the ring as the slight underdog. The Mexican superstar, who turned pro at 15, has been in the game for over 10 years and has amassed over 50 fights at the tender age of 27.

Alvarez has operated at various weights from welterweight, light middle and middle. He is rumoured to be able to put on more than 20lbs between the weigh-in and first bell, so those who are expecting Golovkin to be the heavier man may be in for a shock on September 16th. 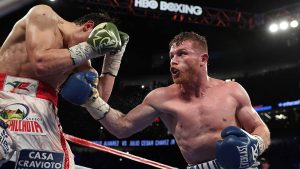 Alvarez’s one blemish came at the hands of Floyd Mayweather, who used his natural ability and ring craft to box circles around the then 23-year-old. There is no shame in losing to Floyd Mayweather. He has made numerous greats look very average. However, what Canelo learnt in that fight was probably more beneficial to him than if he’d have won a decision. He has improved tenfold since.

He throws effective combinations with power and accuracy, is a brilliant body puncher and is steadily becoming one of the best counter punchers in the game.

For a while, it seemed like there was the real danger that this fight would not take place, ala Mayweather vs Pacquiao. Canelo had toyed with the middleweight division but was not ready to move to the weight permanently. He chose a catch weight bought with Britain’s Amir Khan when the WBC made Golovkin his number 1 challenger and then faced another Brit in Liam Williams after. It seemed to many, including Golovkin, that Mexico’s finest was avoiding him.

Golovkin on the other hand kept doing what Golovkin does and broke Kell Brook’s face in a 5th round stoppage and then encountered his toughest challenge to date in the shape of the tall, rangy and quick Daniel Jacobs, winning a close decision.

Canelo announced a ‘huge’ fight with fellow Mexican Julio Cesar Chavez Jr and hammered him for 12 rounds before being met in the ring by Golovkin after the bout, ensuring the boxing world was ablaze with excitement and the announcement of this super fight. 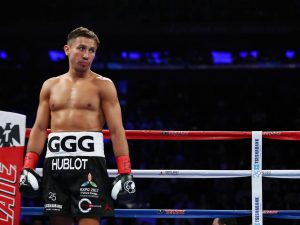 So, how is the fight going to go? That is the million dollar question. This is one of the best fights in years and both guys are so talented that it’s a genuine 50-50 fight. Golovkin on his day is frightening. Standing behind a brilliant jab, he can break his opponents down and quite literally stop them in their tracks. The Kazakh is always moving forward and is happy to take one to land one and he also happens to carry devastating power in both hands.

Canelo’s hand speed and movement is key for him in this fight. If he can get in on the inside, Golovkin’s defence and head movement are not great, which means he really isn’t too hard to land on. If Canelo can get his opponent on the back foot, the fight could lean in his direction.

However, Triple G has the greater ring IQ, has the greater power and is a fully fledged middleweight which leads me to believe that he can control the fight and win by late stoppage or on points.

*Watch knockout of Daniel Geale. He takes a power punch square in the face and proceeds to knock Geale out with a punch of his own.