BREAKING NEWS: BBC has reported Anthony Joshua’s next opponent will be Eric Molina. This is after negotiations for a super fight with Vladimir Klitschko had broken down. 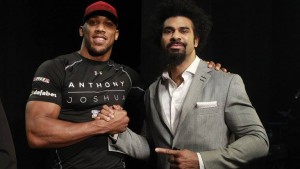 There have been a number of people calling Anthony Joshua for a potential fight. At one point former heavyweight nd cruiserweight champion David Haye was one of the most vocal challengers. However, him supposedly ducking Shannon Briggs has dented his credibility and fan base. But no doubt a fight between the two would be interesting to watch if it were to ever happen (not likely).


Joshua, unbeaten in 17 fights and is looking to fight in a super fight with former heavyweight champion Vladimir Klitschko in 2017. However, before that fight can be agreed upon, AJ needs to get past his last opponent to end 2016.

Here are some highlights of Molina’s loss to Deontay Wilder- He doesn’t look amazing but he isn’t a pushover either.