Arsenal.com have reported the signing of Japanese 21 year old striker Takuma Asano from Sanfrecce Hiroshima.  This is their second signing of the summer; after signing Swiss midfielder Granit Xhaka. 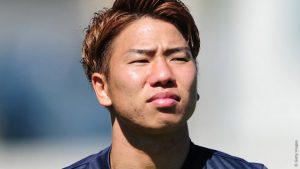 Arsenal have report that a number of clubs were trying to sign the young Japanese forward. Arsene Wenger gave his opinion of the player and his future:

“Takuma is a talented young striker and very much one for the future. He has had an impressive start to his career in Japan and we look forward to him developing over the next couple of years.”

Making his full debut for the Japan national team in August 2015, Takuma has made five appearances for his country and is expected to be a part of their squad for the Rio Olympics in August.

Takuma signed for Sanfrecce Hiroshima as an 18-year-old in January 2013 and enjoyed great success with the J-League side, making 56 appearances and scoring 11 goals.

However, for many Arsenal fans they will see this as a signing for the future. Rather than a player who can help Arsenal better their 2nd place finish to becoming Premier League champions. Many Arsenal fans will still be waiting for a big name signing; especially after Jamie Vardy decided to stay with Leicester.

Here are some highlights of Takuma Asano young career so far:

Let us know your thoughts
Do you think Takuma will be a good signing for Arsenal?
Do you think Arsenal need to make ‘bigger’ signings?