Alkaline's Brixton Concert 'locked off' | Is This A Reflection On Black Culture Or Merely Poor Planning?

Dancehall artist, Alkaline’s concert, in London, was called off after the police were called to stop crowd disturbances outside of the venue. The negative press around another dancehall/Black event has been a major topic for discussion for #BlackTwitter. There are many videos and pictures on social media of a number of people trying to get into a venue that seems to have been oversubscribed or close to capacity. However, many in and outside of the Black community are unfairly using this as an example of ‘Black people and culture’.

Even so-called non-bias media outlets such as BBC reported the fact one person was reported as injured due to trouble at the venue. However, the BBC’s front page had no report about the videos of people fighting after Arsenal victory over Manchester City at Wembley.

“Academy Music Group would like to thank the police and response units, staff, security and all performers, who acted swiftly and professionally to diffuse the situation outside as quickly as possible with no issues inside the venue.

When he toured the UK last year, a number of Alkaline’s gigs were cancelled over security fears, including one in Sparkhill, the Birmingham Mail reported at the time.

“At the request of West Midlands Police , it was agreed the event should not go ahead due to specific and credible information received by police, which raised concerns for public safety,” said a police spokesperson in June 2016.

In short, there are many other factors that impact an event’s potential for disorder. The problem becomes exacerbated when we use these minor instances of crowd disorder as a general statement on whole cultures of people.

#Alkaline is trending for all the wrong reasons 😑 sad times for black culture, dancehall music & Brixton

We have to step back and look objectively at the other factors that contributed to the potential disorder. The disorder can usually be caused by these 3 variables Venue size + Venue Dates x Popularity Of The Performer.

o2 Brixton Academy has a capacity to 4921 and Alkaline was booked to perform at the venue for one night. His previous attempts to perform in the U.K have been halted due to oversubscription and crowd disturbances. Therefore, Alkaline is seemingly more popularity than his promoters estimate.

Therefore, bigger venues such as Wembley Arena(12000) or 02 Arena(20000) could have been booked. However, with bigger venues comes more costs and a greater need to sell tickets. Yet, bigger venues often have better security and essentially make people act in a better manner due to the prestige, greater numbers of security/CCTV and generally fans, clubbers, and attendees being in a less compact space.

In short, if you compacted people into a small venue or have people outside with the knowledge that they won’t get to see their favorite artist for months/years, some people will ‘try’ their luck and seek to gain entry by any means possible. Whereas, if the venue is big enough to accommodate the demand or there are enough dates that most people are able to obtain tickets legally, then there is less of a  chance that will people try their luck.

Thus, the issue with the lack of Black events/venues rather than Black people or culture. Black artists are often far more popular than the proportion of Black people living in western countries. But, outside of major arts like Drake/Rihanna, it is often months/years before a fan of Black artists can have the chance to see their favorite artist live in the flesh. However, when that opportunity arises it is often at venues that aren’t able to handle the demand. Why? because people often underestimate just how popular Black music is and/or how much support Black people and non-Black people are willing to give dancehall, hip hop, and other Black music forms.

The problem extends itself to nightclubs as well. Many of us have been to a nightclub that plays ‘Black music’ and people have said it is a source trouble. However, the troubles develop from the scarcity of clubs that are well organized that cater to fans of ‘Black music’. If there is only one popular club that plays Black music or one popular event, then many people are going to try to gain entry to that club/event. Whereas, if there were more venues of quality that cater to fans of black music, those many people will be spread across the City, rather than confined to one location. 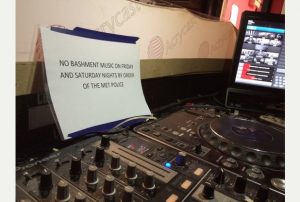 For instance, the owner of Dice Bar in Croydon spoke out about how the police told him not to let his DJ’s play Bashment music.  Mr Seda, Dice Owner said

“Every week customers come up to me and ask why we’ve stopped playing bashment music… They don’t understand. They think I’m a racist. All I can say is I am really sorry but the Metropolitan Police has told us [not to play bashment] and, if we don’t, I will lose my licence. Someone has to stand up and say this isn’t right. People deserve to know what’s happening.”

“Singling out Caribbean and specifically Jamaican music as being associated with crime and disorder is profiling – which is unacceptable,”

Yet, the issue is a self-profiling prophecy. The police will state or ‘insinuate’ they cannot issue events licenses to play ‘Black music’ due to chances of a public disorder. Which means there are less Black music clubs, which means more people have to go to the limited amount of venues, clubs and concerts that cater to their Black music tastes. This subsequently, leads to potential oversubscription which contributes heavily to the disorder.

With that said, people should be able to control themselves and their actions. But, the disorder was by a minority and should not be used to reflect the actions of the majority.

Here is how #BlackTwitter reacted

When you were upset you couldn’t go to the Alkaline show but now you see why it’s trending and you all of a sudden feel better pic.twitter.com/4FLvyw9CJL

Every1 running to see alkaline just imagine if we ran like that to church to hear the word of God. We rush for mankind but not the maker️

Your mum didn’t endure labour for you to bum rush a door at an Alkaline concert. Want better for yourself.

So who do you think is to blame? 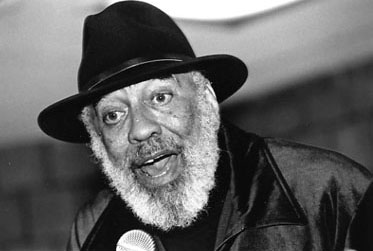