After Donating Hair to Cancer Patients Little Boy Gets Cancer: Why Vinny Desautel Needs Our Support

4 years ago this caring little boy grew his hair long, so he could donate it to kids and people who are fighting cancer. A saddening twist of fate has meant he is now battling his own fight against cancer. 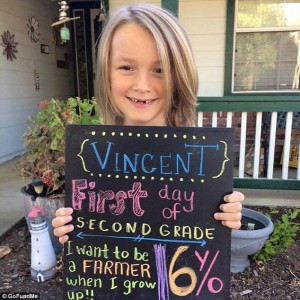 Vinny Desautel, heartbreakingly now has Stage 4 aggressive cancer, most likely Ewing’s sarcoma, a rare cancer of the bone or soft tissue. Vinny’s parents are appealing for help; much like the help this brave little boy selflessly gave to others.

The Washington post reported that ‘Seven-year-old Vinny Desautels learned about cancer for the first time because his mother, Amanda Azevedo, was helping survivors of the disease get ready for a gala. She is a hair stylist who volunteered with a local lymphoma foundation, doing the hair of former cancer patients before they arrived at an annual benefit event. ‘

Vinny then decided he would grow his own hair and donate it to “Wigs for Kids.” For two years he grew his hair and endured the taunts that young boys with long hair face; “you look like a girl” etc etc. However, this young boy remained positive and determined to see out his goal. 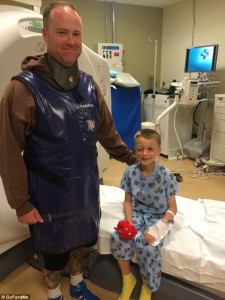 Outstandingly, by March his hair had grown to 13 inches. It was now time to cut his hair and donate it to help people battling against cancer. His mother had explained to him that cancer is especially traumatic to women, whom have to cut off the long hair that they are often known for.

Soon after doing such a benevolent gesture, Vinny would be sadly undergoing his own fight against cancer and have no more hair to give.

Within weeks after giving, Vinny had a stinging his right eye that would not go away. At first his parents thought it was merely allergies similar to hay-fever.

However, by April, his eye had become swollen, so they booked an appointment for him to see a specialist.

But, the day before the appointment Vinny came home with substantial swelling around his knee and hip. His parents asked Vinny whether he had simply fallen over. However, when he said he hadn’t and the swelling remained bad, they decided to rush him to A&E. Doctors soon discovered he had a tumor in his pelvic bone.

Vinny’s condition has become progressively worse. He can now barely open his right eye and had undergone blood tests, MRI scans and cancer treatment. All of which are a very daunting prospect for any 7-year-old child.

Whether you believe in Karma or not, you should be able to recognize that this little boy’s good dead deserve recognition and he deserves our support. 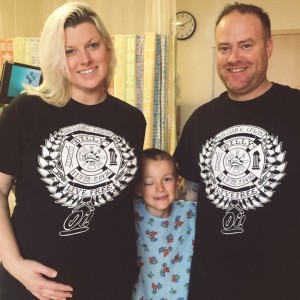 His Mother is pregnant with her third child and his father has taken time off work to support Vinny with his treatment. Vinny’s mother is unable to carry on working as a hair stylist and fears she will lose her clients. The family have set up a GoFundMe account for anyone to give donations to help with Vinny’s treatment and recover.

Here is the link to make any donations

If you want to wish Vinny a healthy and speed recovery or sending any other support you can contact him at victoryforvinny@gmail.com

Do you have any stories of cancer battles or advice for others?