A Black Man Hanged A Klu Klux Klan Member & A White Photographer Captured It: Here's What It Means

“I wanted to do something very powerful that ask a lot of questions and start a conversation.” Tyler Shields. FYI Mr Shields is white. Ok, lets start the conversation Mr Shields; but are people ready for the answers?

A naked Black man hangs a Klu Klux Klan member in a pond in the middle of a forest. This is the literally description of photo by Photographer Tyler Shields. Shields simply took the reverse of already existing images. Between 1877-1950 nearly 4 thousand Black people were reportedly hung in America; with zero accounts of KKK members befalling a similar fate. In this photo Shields asks, how would society react if that figure were reversed? The question is how do we analyse this image ourselves?

What is it saying about society then and now?

What is it saying about Racism?

What is it saying about Black people?

What is it is saying about White supremacy?

However, the most poignant question is; what does it say about the viewer; in how we choose to compartmentalize this image?

Well, if a picture is worth a thousand words; then this image is worth 165 minutes. This image is comparable to the cinematic expression of the revising of America’s racial history that sums up Quentin Tarantino’s Django Unchained.

This image and that film both evoke empathy, controversy and debate around the question of fictional Black retribution and “avenging”. However, we must never forget that both remain fictional, made up, NOT REAL and it is that fact that we must never lose sight of.

The reality of the world is Black people were hung from trees, raped, underwent torture, forced servitude, treated like livestock, killed by the police, oppressed/discriminated in the work place and globally their deaths have been ignored or devalued. But let us look at this image and why the fiction seems so powerful…

Interpretations of the image

Like a question in an exam; let us analyze the potential symbolism within this image.

What is the image saying?

Racism is dead? The naked and unashamed brute strength of Black people has culminated in us killing racism. Or is it that the obvious forms of racism are dead with the KKK being the personification of that obvious form of racism? But, does this image truly tell the full story of the darkest period in American and world history? Was it only KKK members whom terrorised the Black Community? Or is the truth that we can look back at images in history and see faces that aren’t covered by hoods, numerous people marching against Martin Luther King/progress and many people unashamed and unapologetic in their hatred of Black people.

Why is he hanging a KKK member? 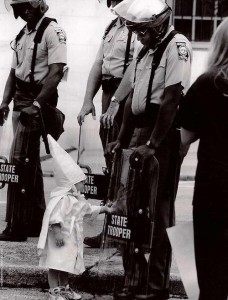 The KKK are the personification of open racism. Much like the Nazis were the personification of anti-Semitism. Although, the Jewish community were able to have ‘their day in court’ with the Nuremberg trials which putting their persecutors to account. Many Black Americans feel that they are yet to have their day in court and still live within an unequal and racially biased society.

What is the reason for this lack of justice or accountability for an equally horrific time in human history? Well, this personification has become a get out of jail freecard for White America and people in general to pretend it was only people who wore white hoods or swastikas that were racist, anti-sematic, bigoted or prejudice. One need only to watch any Civil rights footage and you will see the face of average White Americans spitting, fighting and trying to stop the advancement of Black people for voting, eating, schooling, building business or simply living as free men and women.

However, at the same time another group of average White American faces stood alongside Martin Luther King at marches and chanted “Free Huey newton” with the Black Panthers. Question becomes what if this wasn’t a KKK member? What if it was just an average white person? How would a person determine whether it was one of the smiling face that appeared in images of Black people being lynched. Or one of the determined faces that stood, spoke out and fought for the Black struggle despite themselves not being black. If Tyler Shields had taken that photo, that would have been a controversial image and created a far deeper conversation! 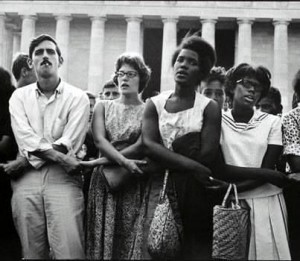 Why is the Black Man naked?

Maybe he is naked because the white supremacist system has stripped black people of their identity, history, language, kingdoms and freedom. Leaving them only with the desire for freedom and the belief in a better day to keep them warm. Or is he naked because it symbolises that despite having nothing Black people are unafraid and unapologetic in their pursuit for justice. They would fight their oppressers with nothing but their bare hands, naked skin and unwillingness to go silently into the night as their weapon.

Why alone in a pond in a dark forest?

This death occurs in a dark empty forest to symbolise that black people were freed into a society where they had no stake, infrastructure or influence. Leaving them to fight against racism or drown in a pond of their own fury and freedom. Or is the pond symbolic of the belief that the desire for retribution and growing anger will consume us. If this Black Man stays naked and only focuses on killing the obvious form of racism. Will he only end up drowning or catching hypothermia from his focus on retribution? Is the image saying it is time to move on put clothes on our backs. Clothing being the rebuilding of our economic power, infrastructure, community and history. Asking us to leave the obvious forms of racism to die of old age; as we prosper and grow in power and influence.

They gave them falsely believed freedom only to really lead them into the prison industrial complex, prejudice workforce, discriminatory school system and a society that still had elements that became nauseated that the hands that were picking cotton finally held the pen at the white house desk. But despite these disadvantages black people fight on to kill the racism they face each day; #BlackLivesMatter…

“Racism never dies it only multiplies” Chris Rock. Well, I am not sure it is still multiplying but it certainly hasn’t died. It festers like a cancer. Sometimes it is obvious and can be combatted with some kind of treatment. Other times is malignant or dormant waiting for the right event to allow it to flare up. This is the worst kind. The kind of racism society doesn’t know how to treat; the kind of racism most of society doesn’t acknowledge exists or festers inside a lot of people. The kind of racism Black People cannot fight alone.

So, as I said this picture is fiction not reality, not historically accurate and not how racism will be defeated then or now. However, as we began with asking what does it say about the viewer, in how we choose to compartmentalize this image?

Regardless of race a person will see this image as powerful. However, race will often influence whether a person sees that power as: righteous or dangerous; justified or unjustified and/or right or wrong.

I ask why is this fictional retelling of oppression more powerful than actual factual images of the oppression of black people. Like why have more people seen the fiction of Django; Unchained than the harsh, saddening and undeniable true story of 12 years a slave.

Finally, admittedly there are some Black people whom would prefer the image showed more than the obvious personification or racism. They would support an image showing the systemic, institutional or the anonymous form racism takes on the internet. But, as we have discussed that would lead us with no ability to differentiate between friend or for; those white people whom walked hand in hand with Black people in the fight for inequality. Just because they share the same skin colour under the KKK hood; doesn’t mean they share the same character, moral compass and negative thoughts.

It is never loosing sight of this fact that keeps a person objective and open minded. Objectivity keeps you from being consumed by hate and generalise a whole group of people as ‘evil’ or equal participants in oppression and supremacy.

So, I believe for us all to move forward we must work together, fight together and think of a way to make the future bright for every member of society.

Did you find this image controversial? Do you think it makes a powerful point or is a missed opportunity?
Please like and share; challenge someone to think a little deeper…
Check out these posts