Walter Scott, Philandro Castile, Eric Garner and Alton Sterling. Four unarmed African-American males who died recently at the hands of police officers. Their deaths sparked outrage not only in the US but also around the world. What was even more shocking about their deaths is that to date, despite the fact that none of the mean were armed; none of the officers involved have been convicted. Not one. 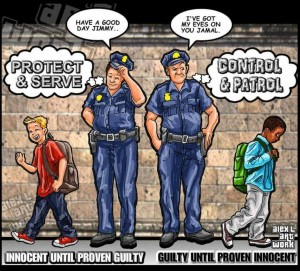 Even here in the UK, these names and the stories behind them resonated and still do.


Here are some more names for you to consider:

Sean Rigg, Olaseni Lewis and Leon Briggs. These names may not be as familiar but they should be. They are just three examples out of hundreds of unarmed Afro-Caribbean males who have died whilst in police custody.

In fact, since 1993, approximately 1,500 individuals have died in police custody. Disproportionately, 500 of them have been Afro-Caribbean or Asian males. What is eerily familiar though is that similar to the cases of unarmed African Americans killed in the US, not one officer involved has been convicted.

For example, Leon Briggs died while being detained under the mental health act at Luton Police station in November 2013. Almost four years later, his family and other dedicated campaigners are still seeking answers.

The distinct lack of convictions that one would expect have not been forthcoming and this sends a chilling message not only to ethnic minorities but to all Britons and it is a simple one. If you die in police custody, The very institutions whose sole purpose is to uphold law, order and justice will fail probably fail you.

The UK has a long history of championing the rights of individuals living under despotic and totalitarian regimes around the world but fails to ensure that that the families of individuals who have died at the hands of the state see justice. This is very troubling.

What is also troubling is the distinct lack of coverage of this issue. Remember, a vast majority of the individuals who have lost their lives were British citizens. They were unarmed and being held in police custody where safety and a duty of care should have been a priority. They should not have been in danger but little did they know that their lives were about to end and in a horrific way.

Sadly, the mainstream media has remained largely quiet. The Guardian newspaper, however has been diligent in covering the issue consistently but largely it hasn’t been touched by other UK based leading media organizations.


As a result of the lack of coverage and debate it has meant campaigners have been forced to use provocative tactics to get the issue highlighted and given the coverage it deserves.

For example, In October 2016, The Guardian reported on a number of provocative bus stop posters that had been installed in London to raise awareness. Also, in January of this year, Black Lives Matter sought to draw attention to the issue by protesting close to Heathrow Airport. Many other protests have taken place around the UK and campaigners have worked tirelessly to raise awareness and seek justice.

Above all, what is apparently missing is accountability on the part of the justice system here in the UK. A system that was quick to act when these individuals were apprehended and held in custody but slow to act when it truly mattered.

The scales of justice are supposed to balanced but sadly it would appear that they have been tipped ever so slightly in favour of the state. And that is a sad indictment on this so called democracy.