This Cuban Evaluates Fidel Castro's Legacy, The Revolution & The Cuba He Left Behind 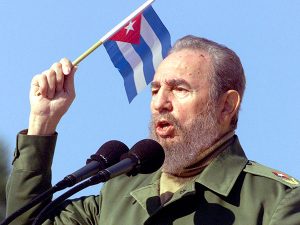 Cuban-Argentinian musician Eliane Correa on Fidel’s trajectory and what happens next for her country after the loss of Fidel Castro.

My mother called me from Havana earlier today to tell me that she woke up startled because she couldn’t hear a single car on what is usually one of the busiest avenues of the neighbourhood. Friends from Cuba reported an unprecedented level of silence in the usually rumbling, almost chaotic city.

Meanwhile, the traffic ground to a halt in the area around Café Versailles, hub of anticastrista activism in Miami. The Cuban-American community celebrates with Cuban and US flags and chants of freedom.

The Facebook News Feed of those of us who are Cuban or have anything to do with Cuba are up in flames today. Insults are flying. Orderly debate has been replaced with name-calling, finger-wagging and sourceless statements of every shade, interspersed with occasional facts and links to traceable information here and there. The general feeling is that we have no idea how to deal with today’s news, so we have collectively lost it and taken to social media as a soap box.

Se murió Fidel. Fidel is dead. I, like many others, had forgotten that one day I would be reading and uttering these words. How ironic that one of history’s most prominent communist icons had to die on Black Friday, this ultimate expression of consumerism, which is also how we now know for sure that he truly was alive until yesterday. The popular theory that he had already passed away and was being kept in a freezer until all the necessary arrangements had been made was just a rumour after all.

In December 1956, Fidel, Raúl, “Che” and their men disembarked in Eastern Cuba from a small yacht called “Granma”, with the idea of running down Batista’s CIA-backed, well-armed, 10,000 strong military. They arrived at a distinct disadvantage: they disembarked in the wrong place, on the wrong day and without their weapons, which had sunk along the way. Batista’s forces were expecting them; of the 82 men on board, only 17 of them escaped to the mountains to continue the guerrilla. Most of the remaining men were tortured and/or killed.

Over the next two years, these 17 men proceeded to build a guerrilla which ultimately succeeded against all odds in dismantling Batista’s military dictatorship, partly thanks to Fidel and his team’s faith and determination (and, of course, luck), which fuelled a sense of hope among fighters and supporters across the island.

None of the people who formed the first revolutionary government had any experience in running a country. They still managed to reshuffle the political structures of the country almost from scratch. Land and property were made public to ensure equal opportunities for all, even in rural areas; a free-for-all, across-the-board healthcare system based on the NHS was created, education became free all the way up until the highest academic levels and illiteracy was entirely wiped out by the mid-seventies. Cuba was officially the most equal country in the world throughout most of the eighties, with very little violence and crime.

But not every law passed under Fidel smelled of roses: in the nationalisation of land and property, Fidel never consulted with the previous owners of the land, by then mostly exiled in Florida, which marked the beginning of a toxic division among Cubans “here” and Cubans “there”; jazz was seen as “imperialist music” and forbidden in the early 60s, as were, later, the Beatles and long hair on men. Homosexuality was a crime until 1979 and HIV-positive people were locked up in a residence far from contact with non-infected humans. In the name of atheism, displays of religion were banned; this law mostly affected followers of Afro-Cuban religions and was seen as a step backwards in the complicated path towards racial equality in Cuba.

When the Soviet Bloc fell and the US tightened the embargo, Cuba predictably plunged into an unprecedented crisis. Since the Revolution, it had relied almost entirely on the Soviet Economic Area for trade, and for the first time in its history the country had to stand on its feet without the help of an economic superpower. Scrambling for solutions, Fidel and his team introduced a series of emergency measures called Período Especial: food shortages, carpooling and electricity cuts became part of daily life, and international tourism went from a small and contained industry to a nationwide boom, bringing with it inequalities, prostitution, crime, social tensions and environmental issues. Some say Fidel did well, considering the bleak future Cuba faced. Others say he should have packed the idea of a socialist revolution and stepped down. The reality is that most Cubans remember the nineties as a difficult and tense decade, an exuberant but collectively traumatic period fuelled by rum, sweat and soy protein, in which only a very basic lifeline of welfare continued to flow through the island, guaranteeing bare survival.

Eventually, tourism stabilised, the Chinese invested, biotechnology began to bring its fair share of money into the economy and the situation improved, but who can blame the children of the nineties for rejecting a system that fed them crisis since they can remember, while the media continued to blabber on about the wonders of the revolution?

Since Fidel stepped down in 2006, the long-awaited “change” is dripping in slowly, and it has brought with it both good and bad news. The good news is that Cubans now have (almost) the same rights as tourists: they can own cars, mobile phones, stay in hotels and, in most cases, exit the country freely. The variety of items available at the imported goods stores has increased – you can even drink Coca-Cola now. The bad news is that salaries are still stuck at old standards, so most of the population can’t afford to savour this change. The gap between the haves and the have-nots continues to grow exponentially. Havana is full of “Chillout Lounges” with elaborate menus that charge 6 dollars for a small bottle of Heineken. The affordable, state-owned markets are badly stocked because every morning food resellers, now legal, buy all of the available produce and resell it at prohibitive prices. The 5% at the top of the population is having a fabulous time in this new Havana that, whilst still proclaiming itself socialist, has crafted an inner economy especially for them, whilst the remaining 95% stay behind, ignored, wondering whether this long-awaited change will ever trickle down to them.

Did Fidel agree to this?

Love him or hate him, one look at Havana today and it’s clear that this is not his Revolution anymore. The healthcare and education systems still shine in all their glory, and the people of Cuba recognise the value of this, but there was more to the Revolution than the welfare pillars. Time has taken its toll, and in 2016 there isn’t much left of the sentimiento revolucionario that moved Fidel, Che, Raúl and their comrades. Facebook is up in arms about the end of an era that, in fact, has been quietly dimming for years. Nobody can tell for sure to what extent Fidel was an influence in his brother’s decision-making, but one thing is for sure: nobody has been waiting for him to pass away to begin implementing the “change”, and the CIA isn’t about to invade noisily because the American Dream has already been trickling in through the side doors for years. Nothing outrageous is about to happen. The old man died at 90, on his own terms, after making the impossible possible, changing the course of world politics, provoking devotion and rage in equal parts across the world, and surviving 638 assassination attempts. The exiled community may be throwing a carnival at the Café Versailles, but Cuba respects him in silence today, in acknowledgment of his greatness beyond his triumphs and his mistakes.

Now, let’s see what Raúl is made of.

By
Eliane Correa
facebook.com/elianecorrea
Let us know your thoughts
How will you remember Fidel Castro?
What do you think the future holds for Cuba?
Please comment below and share to challenge someone to think a little deeper 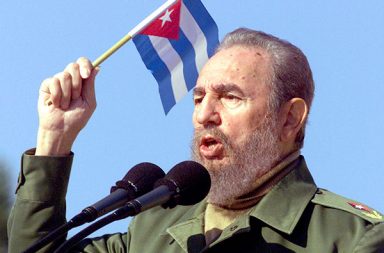 Fidel Castro Dead at 90: Few Revolutionaries Get To Defy USA And Live Long Enough To Turn A Dream Into A Reality