Just how long does our empathy last? Most people were shocked when the image of the young boy laying face down in the sand hit national news. However, in one day of 2016, 40 people drowned. Which meant over 200 people have died whilst trying to cross the Aegian Sea since the beginning of 2016. Human Rights Watch said January was the “deadliest month so far” for people trying and sadly failing to make the journey to Greece or Turkey. However, their deaths and journey barely made a ripple of outrage. It seems that the plight of these refugees has hit the bottom of the well of empathy.

The nature of social media and 24-hour news coverage is that an issue can explode and implode just as quickly. People want “news” but in instant and ready-made format. However, real issues do not disappear in a couple of days. They are on going sagas with complicated histories and ever developing stories. Not really sufficient to command our 140 characters of empathy for very long. That’s why those whom are interested and remain empathic, have to keep stories alive as long as the issue is still a problem that needs attention.

This is not an easy task, especially when we have our own lives to deal with and all of the many other distractions on social media. However, it is a task that must be completed. In 2016 onwards, public support for a cause drives political decisions more so than in any other time. Sadly, those who are most vocal are usually the ones who lack empathy in the first place.

Remember, there are many people who didn’t care in the first place! 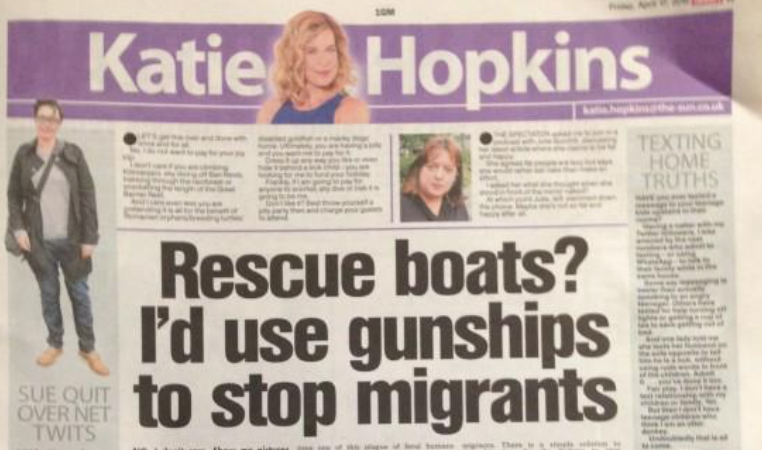 Thus, those who care need to carry on carrying, sharing and speaking out. Why? So, we can change the narrow minds of the Katie Hopkins, UKIPs, Britain Firsts, Fox News and Daily Mail commentators and followers of this world. Those who make statements like “send them back”, “throw them back into the sea”, “greedy for the good life in Europe’, “i’d use gunships to stop migrants” & “cockroach migrants”.

When will they say enough is enough?

So I ask you, if you still think “Britain is full”. What if it was you needing help, to save your life or your child’s future? What would you do to survive? What lengths would you take to live another day? How would you as a parent give your child a better chance in life?

As you sit in your house, at work or school, just as your life seemingly ticking over at the pace you have grown used to.  No doubt some days are better than others and sometimes you have your highs and sometimes your lows. However, your lows are never really that low and your highs are so in abundance that you devalue them to just being normality. Normality such as your child’s laughter or a loved one’s smile greeting you home after another 9-5 day.

Admittedly, sometimes you complain about the boredom of Mondays. You half-heartedly, celebrate the freedom that Friday brings. You complain to yourself or your social media friends when the bus being late is the main cause of disdain for your day. Sometimes, those politicians we give our sovereignty to seem to be doing an ok job; they say they are “protecting the national interests”. Other days, you do not quite like what those politicians are saying; but you get back to living your own life; remembering you voted 4 years ago, so you have played your part.

Therefore, you get back to occasionally complaining about those minor annoyances and undervaluing those many securities and joys. You continue on this roundabout until one day all of that security is ripped away from you. There are no more buses to take you anywhere. Those whom either loved that politician or hated him are fighting a bloody war, with you stuck and lost in the middle. The security you thought was a given is dramatically taken away.

Now each day is a continual battle to survive. What if in the mix of this survival you have the added responsibility of trying to secure your children’s future? The sound of the gunfire is overshadowed by their tears, screams and pleading for food, water and an escape from the fear of death.

But, all you know is your homeland, where your father raised you, where his father raised him. A place where you speak the language, you know the people and most of all, a place you call home. But, how can you stay in a home that has the lingering hand of death knocking on your door each day? How can you keep stop your child’s tears and give them a brighter future?

So, you leave. But leaving isn’t emigrating. You can not sell your house, car or possession. Who is going to buy a house in a war zone? You scrape together what little money you have and hand it over to someone who exploits your need for freedom, safety and a brighter future. You tell your child that you are going on a new adventure to somewhere they will be safe. As you sit crammed into a barely seaworthy boat, your mind starts to weigh the risk of staying versus the uncertainty of going. The uncertainty of going to a land where the people accuse you of ‘looking for a free ride’ and a land where some people say “send them back”; without really thinking where back is. But, the truth is ‘back’ is sending someone to potential death.  Finally, if you are lucky enough to survive the trip where others had perished, even then you may find yourself left for dead in an overheating Van crammed with people.  Can you now imagine the lengths you would go to survive and live another day?

Can you now open your heart to someone who doesn’t look, sound or come from the same nation as you? Can you recognize them as another human? Another human in desperate need of your concern at the very least.

We are all humans trying to live in peace

What is living in peace? For most of us it is having somewhere we can call home. Having family, friends and security around us to let us know this is where we belong.  Are these not shared values. Shared values that are universal in all societies. No one wishes for their homeland to become a place of civil unrest, war and death.

This little boy is one of many. One of many boys, girls, women and men around the world, whom will die trying to escape death. There will be those who do make it. However, what life will they lead after that? Some will scorn them for trying to simply live another day without the cloud of war thundering over their children’s and their own heads.

Yes, it is a big world and one country can’t help everyone. However, this isn’t an issue for one country; it is a global crisis. Each person must look at themselves and their government and ask “What are we doing to help?”. If Britain took 25k that would only be 40 people were constituency!

As I have said previously when stating “African lives don’t matter”.

I say again that only by standing together can we stop this decent into a world, whereby Extremist attacks become more frequent, Wars become more common place, Apathy becomes the norm and we struggle to recognize the humanity in our brothers and sisters. I don’t want to live in a world that becomes more marginalized and narrow-minded because we don’t speak out. 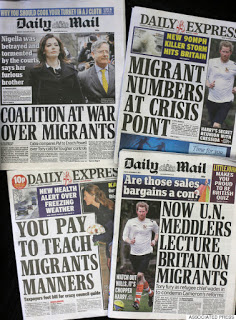 The papers exploit tragedy for profit and readership. They help to build up the anti-migrant, refugee and the scary foreigner narrative. They don’t tell you how migrants boost economies and are essential to keeping public services running. They don’t tell you about how history teaches us that ignoring refugee crises only leads to far worst problems. Papers make profit from hate and fear!

Don’t be fooled by temporary concern. Yet, even if they pretend to care for a while. Let us not let this story die. Let us not let these people’s lives die in vein. Let say no more; I won’t stand by and allow apathy and disrespect to be the commanding voice of my nation! I care and so should you!

Remember this, Katie Hopkins, UKIP, Britain First or any other ignorant and/or Racist group/icon is only as strong as their followers. If you can persuade someone to stop supporting them; then their power of influence will diminish!