Mayweather vs McGregor: Sorry Don’t Get Your Hopes Up Money Can't Buy Everything!

The sporting world was awash with rumours this past week at the prospect of a super fight between boxing superstar Floyd Mayweather and UFC’s Irish sensation Conor McGregor. 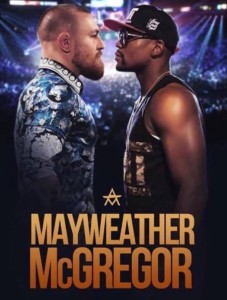 On Saturday, Floyd Mayweather called a fight with Conor McGregor “possible”. In fact, the man who carries the moniker ‘TBE’ (The Best Ever) admitted that he, in fact, started the talk of a return to the ring against a mixed martial arts fighter – although he stopped short of confirming that it was Conor McGregor he was referring to.

“Keep your fingers crossed, it may be a boxer versus an MMA fighter,” Mayweather – who retired with a record of 49 wins and 0 loses, told boxing website fighthype.com.

However, the man nicknamed ‘The Notorious’ went a step further by later tweeting a mock up picture of the two having a ‘face off’, leaving no doubts that he, like the rest of the world, thought, or hoped, Mayweather was talking about him.

An interview with Freddie Roach, long term trainer of Mayweather’s arch rival Manny Pacquiao, stoked the flames even further, when he confirmed that he had been approached over training McGregor.

“They did ask me if I’ll train him. I said ‘sure, bring him down.’ I’d like to see him, meet the guy and see what he has. He seems like a nice guy.” said multiple trainer of the year, Roach.

Now, the idea of the biggest names in boxing and mixed martial arts clashing, from the off, seems like an absurd one. First of all, would they square off in a ring or in the octagon? Secondly, their skill sets are completely different – despite McGregor saying he would dismantle Mayweather in a boxing match – one would have to agree to fight in a different discipline for the first time. This would almost certainly be McGregor, as there is no way Mayweather would agree to fight using mixed martial arts. Finally, they are currently two completely different weights. Floyd usually fights at 147lbs, whereas McGregor most recently fought at 170lbs, so again, one would have to agree to change weights…again, this would almost definitely be McGregor.

Common sense, it would seem, would say that there are too many obstacles to overcome.

Another big stumbling block would be the fact that McGregor is signed to the UFC. This means, that the UFC and president Dana White, would need to be involved in any discussions over the bout, unless Conor McGregor was to leave the UFC, however this would be unlikely. Mayweather runs his own promotional company (Mayweather Promotions) and would no doubt want to promote any potential fight himself, meaning that he would need to work alongside the UFC in staging any event.

That being said, if there is one thing that both these men can do, it is sell a fight. In fact, there may not be two other athletes in any sport today that are more gifted in self-promotion than Floyd Mayweather and Conor McGregor.

Mayweather has been involved in the top 3 highest grossing boxing matches of all time. That isn’t luck. Mayweather spent years crafting himself in to the perfect sports marketing tool – a flashy, arrogant and controversial boxer, who is universally hated, but so supremely skilled, that people would pay to either watch him win, or to watch him lose – a feat which people are still waiting for.

The younger McGregor on the other hand, has had a much shorter career so far, but has blazed his own path in the UFC and has taken the sport to another level. The Notorious has been involved in two of the top three grossing UFC fights of all time, despite only making his debut for the company in 2013. The outspoken Irishman combines an aggressive fighting style, with an equally sharp tongue.

However, the chances of this fight actually happen are slim to none, and slim just left town! It seems like a very intricate ploy to keep both fighters in the media spotlight, whilst their prospective advisors, promotors or managers figure out their next moves behind closed doors.

The rumblings of Mayweather returning to the ring are growing by the week; however, it is more likely to be versus undefeated WBC Welterweight champion, Danny Garcia. Mayweather recently said he would demand a minimum of $100m to return, which means that any deal lined up for him will take time to come to fruition.

McGregor on the other hand, is in the middle of a feud with the UFC, over being pulled as the headliner of UFC 200, over a promotional dispute. McGregor is taking on White and the UFC, who are keen to not relinquish power to their fighters, no matter how much money they generate for the organisation.

Neither Mayweather nor McGregor would want to risk tarnishing their reputations in what would likely be a media circus to end all media circuses. But then again, both these men are a law unto themselves and are all about the pay check. Would a $100m purse for Mayweather, and a career high pay day for McGregor be enough to entice these men in to the ring for a one off, cross-sport, mega fight? It seems unlikely, but in sport, you can never say never.

Let us know your thoughts
Do you want this fight to happen?
Who do you think would win?
Please like, comment and share; challenge someone to think a little deeper