Is This Teacher’s Outfit ‘Too Sexy’ Or Is Society Too Perverted? Why Hasn't Social Media Judged These 2 'Sexy' Male Teachers

#TeacherBae is the nickname social media has given Patrice Brown. Although, she may not actually be a ‘teacher’, yet people are assuming she is a teacher. According to the Atlanta Public School’s Patrice Brown is not a teacher, but a paraprofessional with the district. In the UK, we would refer to her job as more of a Teaching Assistant. However, whatever her title, she is in a classroom full of 9-10year olds. Therefore, some people on social media have described the outfits she wears in the classroom as being too ‘tight’ or ‘too sexy’.

Due to this social media uproar, the APS have given Patrice Brown “guidance regarding the APS Employee Dress Code.”.

The APS dress code policy states “immodest dress, tight or otherwise revealing” as being considered unacceptable, as well as jeans not worn for special projects and activities. Moreover, her social media account has now been made private, despite her accumulating 160k followers on Instagram due to the discussions on her clothing choices.

Question: what makes her outfits so sexy to some people? The image below shows the same dress worn by women lacking her ample curves. Would they be receiving the same level of outrage and discussion? 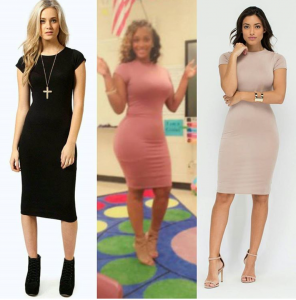 This is just the latest example of society telling women what they can and cannot wear. Last week it was the pro vs anti burkini argument. It seems like for all our talk of western freedoms and equality, women are still being dictated to by and due to the patriarchal perversions of society. Maybe it is time, we covered up the Statue of Liberty as well.

However, ‘sexy’ must mean sexy to someone. As a society, we are talking about men. Yet, the majority of 9 or 10-year-old boys aren’t going to notice the clothes their teacher wears. Unless we are saying we are sexualizing the minds of our children from such a young and prepubescent age.

It seems like we are sadly saying that even at the age of 9, boys objectify women because of their bodies. Therefore, women must be covered up to protect boys from themselves and the men they will become. This seems like a sad indictment of society.

I think there has been an overreaction. I have personally volunteered in a primary school. Having worked around 9/10-year-olds, I know they pay little concern to what their teacher is wearing. Their awareness would only spike if the teacher happened to be dressed like one of their favorite footballers, comic book heroes or they were naked. Patrice Brown does not dress in any of these ways.

Example: One day, the teacher I was assisting did not realize that her skirt was somewhat translucent in the light of the classroom. However, none of the children noticed. I noticed because I am a grown man! Shamefully, indoctrinated by society’s objectification of women. Yet, it did not matter what I thought. Why? Because her job was not to teach me, she was there to teach the children, whom have a thirst for knowledge that far exceeds their awareness of shapely figures and chances to perve on them. 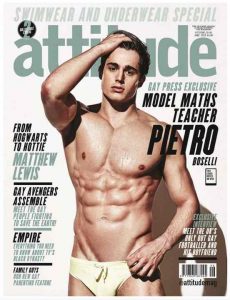 Yet, another question is,

Is a teacher allowed to be ‘sexy’ when teaching students of any age?

It seems hypocritical that Pietro Boseli can be labeled as the “world’s sexiest maths teacher” and be seen posing in his pants. Boseli, teaches maths at University College London. Surely, his adult students would be far more aware of ‘sexiness’ than a class of 9-year-olds.

Or a more relevant example is personified by this male elementary school teacher in New York, who goes by the Instagram name “ImWhyGirlsCheat”… Jamal Fenner’s Instagram name says it all. He also wears tight fitted clothing in the classroom. Yet, I have not read any discussion on his attire being inappropriate.

Surely, this proves we judge women by a different standard to me. By we I include the judgment given by women against other women…

The truth is all of these teachers and assistants most likely do a great job and work very hard. The real story should be the numerous confessional videos from teachers in America, where they reveal how they consistently have to use their own money to buy classroom supplies for their students.

People should be outraged by that. People should be lobbying their school district about why teachers are underpaid and classrooms are underfunded. But alas, social media only reacts to superficial attire rather than the real issues that will impact our children’s education.

Let me know your thoughts.
Do you think there is a double standard with society’s judgment of teachers?
Please comment below and share; challenge someone to think a litter deeper